Freedom Boat Club of Jacksonville and St. Augustine Named Franchise of the Year 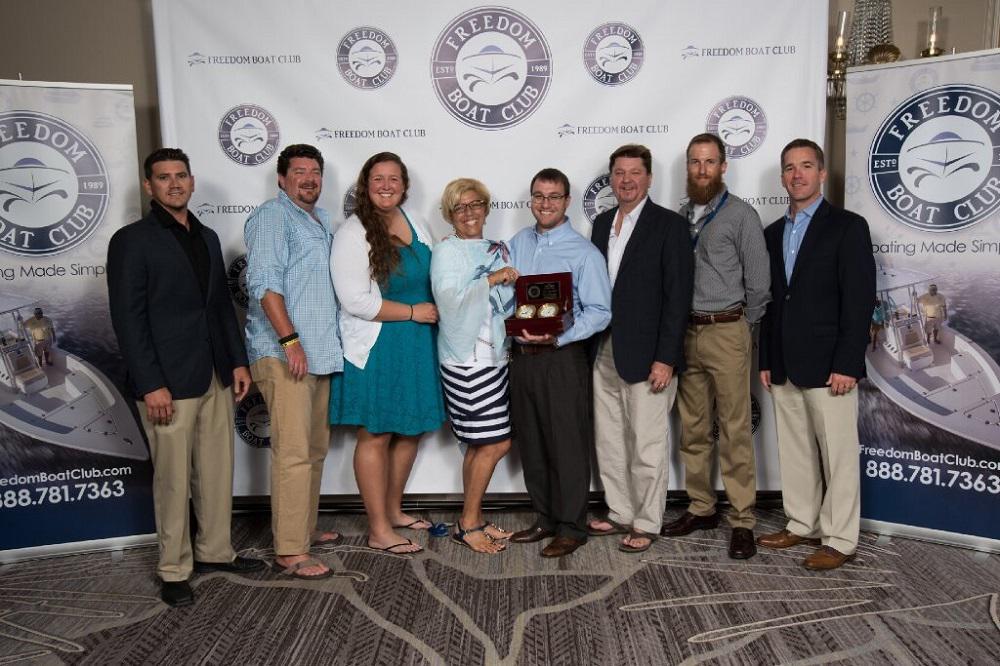 Venice, Fla., Nov. 27, 2017 – Lisa Almeida and Kevin Seelig, owners and partners of the Freedom Boat Club franchise in Jacksonville, St. Augustine and the newly launched location in Ponte Vedra, received four major national awards at the 2017 Freedom Boat Club National Franchise Conference held recently in Ft. Myers, FL. Topping the list is the most coveted award of all, the 2017 Freedom Boat Club Franchise of the Year, given to the club with the overall top performance over multiple categories.“I am beyond thrilled that we have been chosen for this prestigious designation from our Freedom Boat Club family,” said Almeida. “I am so proud of our entire staff for all their hard work and dedication.” Additional recognition for the franchise team included the inaugural Membership Executive of the Year award given to North America’s top Freedom Boat Club sales professional. Staff member George Biastre took home this top honor. The franchise also received recognition as a two-year member of the National Marketing Advisory Council and for its participation as a National Charity Marketing Partner in behalf of its contributions for Big Brothers Big Sisters of America. “We are very pleased to recognize Lisa Almeida, Kevin Seelig, George Biastre and the entire team for an outstanding year,” said Freedom Boat Club President and CEO John Giglio. “Their hard work and effort in growing the club and marketing the brand, coupled with their recent expansion into Ponte Vedra and their high level of commitment to providing excellent member service, placed this franchise in a league all its own.” “Kevin and I are lucky that we have been able to surround ourselves with a team of professionals who are passionate about Freedom Boat Club and who strive to make our locations the very best for our members,” said Almeida. “We invite everyone to come visit us at any of our three locations to see all that Freedom Boat Club offers.” Freedom Boat Club is the nation’s oldest and largest boat club, with more than 145 club locations operating in 29 states and Canada. For more information about Freedom Boat Club in Jacksonville, St. Augustine and Ponte Vedra, call (904) 770-4632 or visit www.freedomboatclub.comAbout Freedom Boat Club Freedom Boat Club is the world’s largest members-only boating club. It is a simple alternative to boat ownership. Freedom Boat Club has locations locally at Julington Creek Marina in Jacksonville, Camachee Cove Marina in St. Augustine and Palm Valley Outdoors in Ponte Vedra. Members have unlimited access to the home club’s fleet and can reserve a boat using a member-friendly online reservation system. Member privileges are also available at any of more than 145 Freedom Boat Club franchises throughout the United States and Canada. Each provides a fleet of boats that come with less stress and a lower price tag than owning a single boat. Freedom Boat Club offers a variety of membership plans. For more information, visit freedomboatclub.com.Freedom Boat Club 12807 San Jose Blvd. Jacksonville, FL 32223

You can edit or delete your press release Freedom Boat Club of Jacksonville and St. Augustine Named Franchise of the Year here

11-08-2018 | Business, Economy, Finances, B …
LeakTronics
LeakTronics Offers a Franchise Alternative
Owning a profitable business that's in demand is easier to come by than most people think. Don't franchise. LeakTronics, the leading manufacturer and worldwide distributor of professional leak detection equipment has created the Association of Certified Swimming Pool Inspectors with online training and marketing techniques to bypass the tradition of franchise ownership and instead, offers a way to own a profitable business in a market that's in demand. Train online and
03-22-2012 | IT, New Media & Software
WSIWORLD
WSI Franchise Opens a Master Franchise Office in Switzerland
Toronto, Ontario, January 6, 2012 - WSI, the world’s leading franchise providing digital marketing solutions, recently announced the opening of a Master Franchise office in Switzerland, geared specially to the German-speaking regions of Western Europe: Austria, Germany, Lichtenstein and Switzerland. This new office will be operated by William Jacober and located in Effretikon, Switzerland, meaning local businesses will have the opportunity to leverage WSI’s advanced digital marketing strategies.
12-15-2011 | Business, Economy, Finances, B …
Franchise Growth Systems
Franchise Growth Systems and Zoyo Neighborhood Yogurt Announce Franchise Opportu …
December 14, 2011 Mesa, AZ – FRANCHISE GROWTH SYSTEMS and Zoyo Neighborhood Yogurt present a truly exciting opportunity to run a quality (and very popular) “froyo” business, and have fun in the process of becoming financially independent! A stellar opportunity to invest in an easy-to-manage, easy-to-finance franchise which has awesome potential for growth and long-term profitability, Zoyo is leading the way in its industry as an economical business model and
11-30-2011 | Business, Economy, Finances, B …
Franchise Growth Systems
Franchise Growth Systems and Eggfast™ Announce New Franchise Opportunities
Columbus, Ohio, November 29, 2011: FRANCHISE GROWTH SYSTEMS (FGS) and EGGFAST™ are happy to announce a partnership which is creating unique franchise opportunities throughout the United States. FGS is offering Master Franchises (also known as Regional Developer Franchises) for Eggfast™, an exciting concept of "Breakfast – Ready When You Are". With 24-hour dine-in, carry-out or delivery, Eggfast™ is fast becoming a welcome alternative to other breakfast-themed restaurants. In addition to
03-25-2011 | Business, Economy, Finances, B …
WSI Corporate
WSI Franchise
- World’s Largest Internet Franchise Acknowledges Its Top 50 Franchisees That Have Exhibited Outstanding Business Success over the Previous Year - Toronto, Ontario, March 24, 2011 - WSI, the world’s most well known Internet company, acknowledges its top 50 franchisees who've earned an opportunity of becoming a member of the company’s 2011 President’s Circle. This professional group is comprised of WSI’s top performing Internet Consultants worldwide who've displayed superb business
03-09-2011 | Business, Economy, Finances, B …
WSI Corporate
WSI Franchise
March 7 2011 Paris, France….WSI, the world’s biggest internet franchise has been certified by the FFF (France Franchise Federation). This is a tremendous boost not only for the WSI business but for all franchisees doing business under the WSI banner in France. “We are extremely excited to be members of the FFF, and understand the accountability that this accreditation will mean to WSI and to all future Franchisees,” said
Comments about openPR
9 o'clock: discuss press release with client, 10 o'clock: submit release to openPR, within the briefest possible time release is published and displayed in a prominent place on openPR.de. I am thrilled!
Zehra Spindler, Calypso Now! - Communication Agency