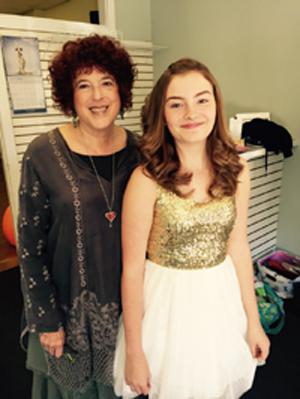 06-20-2018 | Arts & Culture
Barbara Holstein
Body Shaming, Social Media, Bullying And The Drive To Be Best - Selfie Filmmaker …
Barbara Becker Holstein, Positive Psychologist and multi-award winning selfie filmmaker, was recently interviewed by Asbury Park Press. The Asbury Park Press, a part of the USA Today network, is a daily newspaper in Monmouth and Ocean counties of New Jersey and has the third largest circulation in the state. In that interview she talked about her beginnings, her vision for selfie films, and taking "The Selfie Project" to the next
06-08-2018 | Arts & Culture
Barbara Holstein
Body Shaming, Social Media, Bullying And The Drive To Be Best - Selfie Filmmaker …
A recent article in the New York Times entitled "When the 'Mean Girls' Were Teen Girls" gave us a look into the history of the stars of the Broadway hit "Mean Girls". The Tony-nominated musical is based on Tina Fey's movie by the same name. In the article three of the stars - Ashley Park, Taylor Louderman and Kate Rockwell - contrast the characters they play with their own high
05-15-2017 | Arts & Culture
Barbara Holstein
For Teens In Trouble, Hope And Courage Are Offered In Dr Barbara Becker Holstein …
Teen suicide is the subject of a very popular book and television series entitled 'Thirteen Reasons Why'. Teen suicide has many causes, but the paths to prevention are few. In the simplest terms possible, suicide prevention is a question of empowerment. Teens must feel as though they have the power to overcome challenges - regardless of what those challenges might be. Dr. Barbara Becker Holstein's cutting edge selfie films and
03-03-2017 | Arts & Culture
Barbara Holstein
Help Girls Build Self Esteem - Positive Psychologist, Author And Filmmaker Dr. B …
Positive Psychologist and filmmaker Dr. Barbara Becker Holstein has announced she will be partnering with charitable organizations who focus on helping young girls overcome challenges. She will allow two of her most successful creations to be used as fundraising tools - the new short film 'The Truth, A Coming of Age Selfie Film' and an ebook based on her other film entitled 'A Selfie Film, Falling In Love'. "Coming of Age

04-26-2021 | Arts & Culture
New Media Film Festival
New Media Film Festival
NEW MEDIA FILM FESTIVAL® 1st FEST TO ADD NFT TO PROGRAMMING LINEUP First Festival For New Media Storytelling Showcases 119 Content Creators from 23 Countries June 2-3, 2022 Judges from BBC, Emmys, HBO, Marvel and PBS to present $45,000.00 in Awards Los Angeles, April 19, 2021 – The New Media Film Festival® (www.newmediafilmfestival.com) is the first event of its kind in the world to accept non-fungible tokens (NFT) in competition. During its 12th
02-04-2021 | Arts & Culture
New Media Film Festival
Annual Film Festival
New Media Film Festival® introduces new technology, and the communication of ideas through panels and Q & A’s to implement a more expansive use of 21st-century technology in storytelling for both artists and content creators. The 12th New Media Film Festival is slated for June 2-3 2021 at The Landmark in Los Angeles. Serving as the very first film festival to distribute micro-content, to screen AI created film, a holographic
08-13-2020 | Arts & Culture
New Media Film Festival
New Media Film Festival
INNOVATIVE STORIES & TECHNOLOGY CREATORS FINALLY HAVE THEIR DAY – AUGUST 15TH 2020 NEW MEDIA FILM FESTIVAL AWARDS SHOW The 121 New Media Films & Content from 32 countries that are nominees in the 11th Annual New Media Film Festival® voted. Resoundingly the nominees voted to have an online awards ceremony and forgo an in person festival this year. With 38 World – 15 U.S., and 30 L.A. Premieres and the
10-24-2018 | Industry, Real Estate & Constr …
SUCO Robert Scheuffele GmbH & Co. KG
SUCO Image film 2018
To celebrate the company's 80th anniversary, SUCO presented a new image film of the social media plattform YouTube. The 2-minute image film was conceived and realised by MSB-Films: The film focuses on the core values of the SUCO brand, which are also reflected in the new company vision: * Quality in the area of internal training and further education of specialists and managers as well as multi-stage quality assurance throughout the entire
05-03-2017 | Arts & Culture
Nine Ladies Film
The Wasteland Film
The Wasteland a modern day mystery thriller from Nine Ladies Film, scheduled to be shot in the Derbyshire Dales in July 2017. The story follows the journey of Laurence, a loner, a man with a hidden past, who arrives in a small village on the offer of work from a local farmer Frank. Taking the job of rebuilding a field boundary stonewall, Laurence becomes intrigued with the mysterious figure of Holly,
01-24-2013 | Media & Telecommunications
IFT international, inc.
Executive AG protection film
With the beautiful retina display of the new Apple iPad and other top of the line mobile devices, users are more concerned than ever with protecting their screens from daily abuse and optimizing their viewing experience. Now IFT launched an innovative technologies to long line of Screen Protector products, Anti-Glare protection film which provide the ultimate protection for mobile devices. The IFT’s Anti-Glare protection film primary advantage is that it can
Comments about openPR
9 o'clock: discuss press release with client, 10 o'clock: submit release to openPR, within the briefest possible time release is published and displayed in a prominent place on openPR.de. I am thrilled!
Zehra Spindler, Calypso Now! - Communication Agency