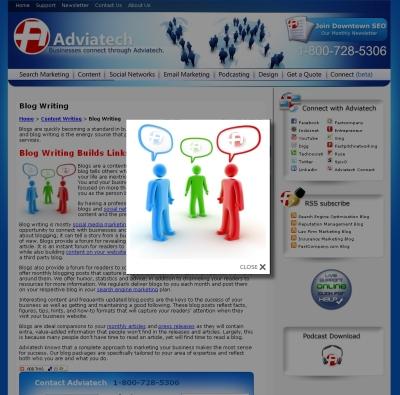 After five years, search engine optimization company, Adviatech, updates their logo, marketing literature, and brand. Adviatech has also introduced a series of new search engine marketing related services.It was toward the end of 2004 when Tampa based American Marketing Management and Motivation Services, Inc., (AMMMS) met with the recently retired Jason Bland. AMMMS, founded in 1994, was led by Christopher Kazor and offered web design, development, and other marketing products. Bland had recently sold his company, which had holdings in both hardware and software technologies, and while nobody believed it would last long, he insisted he was going to relax for a while.“I met Chris in Tampa, back in ’99, at a business event that I attended on behalf of my previous company.” Bland continues, “After I sold that company in 2004, the plan was to relax and take a few years off. Chris had other plans.”It was in December of 2004 that Christopher Kazor asked Jason to meet him and a client at the AMMMS office in Tampa one evening. Kazor closed the call with “By the way, come up with a company name on your way in.”The name Adviatech was derived from Advertising via Technology. The meeting at the AMMMS office was successful, a check was written to Adviatech and at that moment, a company was born.Adviatech was formed to focus primarily on online marketing and since then has become a full service marketing firm with a design team, writing team, social networking and distribution team, plus launched a series of niche marketing spin-offs. From the legal marketing subsidiary, SEOLawFirm.com to the insurance marketing holding of ReadytoQuote.com, to their reputation management department, EBadPress.com, Adviatech’s list of holdings continues to grow.When doing a quarterly financial review in 2008, Bland saw that Adviatech’s growth was far beyond projections and decided it was time to invest in Adviatech’s brand. Kazor recalls, “Originally, I was not a fan of the rebranding proposal and certainly not interested in changing Adviatech’s logo. We later agreed to move forward with the understanding that the concept of our logo would have to stay the same.”For the logo update and rebranding, Adviatech turned to Lorandt Egri. Lorandt created the first Adviatech logo in 2005 and has created the identities for the Adviatech holdings and subsidiaries since then. His job was to create a logo that reflected the original concept while making it blend with the new focus on social networking. The red logo also had to work with the new website design, which was to be blue.Lorandt’s creation of a new logo that maintained the original concept and his fusion of the logo with the website design have resulted in a new brand that will carry Adviatech into the future.Over the next few months, Adviatech will be launching a social network, podcast and upgrading their client management system to simplify the way customers communicate with the individuals working on their project.To learn more, visit http://www.adviatech.com or call 1.800.728.5306.Adviatech is a search engine marketing and search engine optimization company based in Tampa Florida.Adviatech Corp. 9280 Bay Plaza Blvd Suite 706 Tampa, FL 33619 1.800.728.5306

07-31-2020 | Business, Economy, Finances, B …
Tampa Crossroads
Tampa Crossroads Announces Gwendolyn Green as CEO
Tampa, FL – Tampa Crossroads, a nonprofit organization serving the Tampa Bay community since 1977, announced that Gwendolyn Green, LMHC, MCAP has been named the Chief Executive Officer. Ms. Green has served over 14 years with Tampa Crossroads, most recently as the Clinical Director, guiding the organization’s goals so that clients receive the best care possible. “We have witnessed Gwen's leadership abilities and are confident she will serve Tampa Crossroads with
02-20-2017 | Arts & Culture
New Tampa Players
Tampa, Florida’s New Tampa Players Hosts Master Class with Broadway star Danny …
MEDIA ADVISORY FOR IMMEDIATE RELEASE For more information: Nora Paine 813-644-8285 production@newtampaplayers.org www.newtampaplayers.org @NewTampaPlayers Tampa, Florida’s New Tampa Players Hosts Master Class with Broadway star Danny Zolli. WHAT:
12-17-2012 | Industry, Real Estate & Constr …
EasyAC
Tampa Air Conditioning Company Airs Dirty Secrets
Tampa, FL, December 7, 2012—- Easy AC, Inc, a Central Florida air conditioning repair company announced the debut of their new ad campaign, HVAC’s Dirty Secrets, aimed to educate homeowners on the lesser known side of the HVAC business. “HVAC repair is one of the trades most commonly taught to inmates,” said Dave Whittington, Easy AC cofounder. “Nobody wants a guy in their house that had a violent crime or
02-04-2011 | IT, New Media & Software
Visibility Corporation
Visibility Brings ERP Education to Tampa
VISIBILITY ERP customers will assemble in Tampa, Florida, from April 17th through April 19th for the 2011 Visibility International Enterprise Conference (VIEC). Andover, MA – February 3, 2011 – Visibility is excited to announce the dates and location for the 2011 Visibility International Enterprise Conference (VIEC), which will take place in Tampa, Florida from April 17th to the 19th. The highlights of the 2011 conference include the unveiling of V8 and
09-16-2010 | Arts & Culture
Polycreative
'Oktoberfest Tampa' celebrates 200 YR anniversary of Oktoberfest along the Tampa …
Oktoberfest Tampa is celebrating the 200 year anniversary of a traditional German celebration that takes place annually in Munich, Germany. More info is available at: www.OktoberfestTampa.com This year Oktoberfest Tampa will be hosted at the premier waterfront location of The Heights Tampa, and will include Tampa’s largest Beer Hall with a wide variety of cold beers on tap! The Beer Hall will be decorated with themes of famous beer tents
07-24-2009 | Politics, Law & Society
Mayberry Rich
Tampa DUI Defendant’s Charges Dismissed
The Hillsborough County State Attorney’s office dismissed all charges against a Tampa defendant charged with Driving Under the Influence (DUI), on the grounds that the officer who originally pulled over the defendant did not have a legally sufficient reason to do so. The defendant had retained Tampa DUI attorney Jeff Rich of Mayberry/Rich, criminal defense firm in Tampa, FL, as his attorney. The defendant was originally pulled over for
Comments about openPR
OpenPR is clearly structured and remains true to its principle of confining itself to the essential parts. OpenPR has proven to be a very good and reliable partner to our media agency: Within the shortest time the releases are online and go down well with the media representatives. The success of OpenPR is reflected in the steadily increasing number of press releases. It is good that OpenPR exists!
Ursula Koslik, Director Marketing & PR, F+W Hamburg