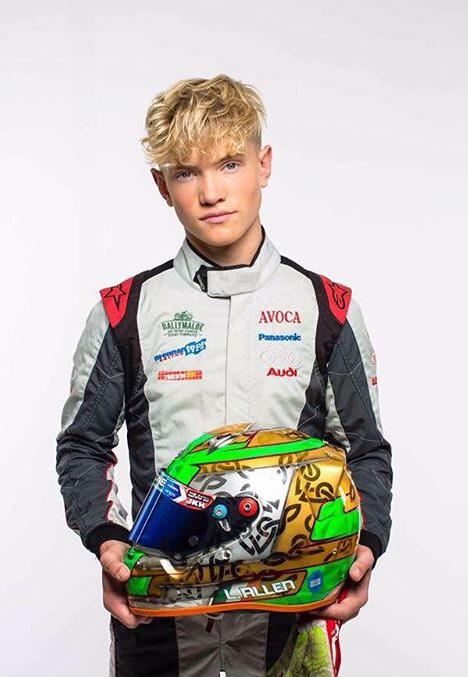 Driver Club Management (DCM) has signed junior racing driver Lucca Allen to its 2018 driver line-up. Allen becomes the youngest driver to be signed by DCM as he warms up for his first full season in single-seaters.At 15 years of age, DCM scouted Allen for his unique assets and his fast rate of development to date. The young Irishman from Cork has risen through national and regional karting championships with great pace and kudos surrounding his abilities, decorating himself with plenty of silverware along the way and leading him into a single-seater for the first time in 2017.This year, Allen competed in the last 5 rounds of the British Formula 4 Championship Powered by Ford EcoBoost with Falcon Motorsport and demonstrated a consistent improvement in lap time and race performance with each round under his belt.Speaking about today’s announcement, DCM President, Peter Jones commented:“I am delighted to share with the media and the motorsport community news of our youngest signing. Lucca Allen has already made a rapid start behind the wheel of a Formula 4 car this year and we believe he has the potential to become one of the sport’s best racing drivers at an international level.“In our role as managers, we will be guiding and shaping Lucca along the next steps of his career with the aspiration of winning races and building a professional brand that will attract fan base and commercial attention from Ireland and overseas. I would like to thank my team for all their energy and enthusiasm that has led to today’s news and I wish Lucca the very best over the winter testing season and into 2018.”DCM’s VP of Talent, Henry James added:“For DCM, Lucca is at a very exciting point in his racing career. Lucca has worked hard to achieve great results in karting and to move into F4 this year. He is committed to his career and he has a mature understanding and appreciation for the motorsport industry, so I am thoroughly looking forward to working closely with Lucca on and off the track.”8th November 2017DCM is a leading talent management company specialised in the career development of junior racing drivers competing in Europe and North AmericaDCM 68 Boardwalk Place London, E14 5SE United Kingdom

04-02-2019 | Business, Economy, Finances, B …
Research N Reports
Smart Wallet Market 2019: Growth Opportunities & Key Players Analysis: Revol Inc …
Smart Wallet Market 2019 is a new report released by the which provides a qualitative insight into the factors that affect global market growth. It provides extensive research into the competitive landscape of the market and also takes into account the market share of the major customers and the overall market in each region by estimating sales and sales. Global smart wallet market is expected to flourish at a significant CAGR
03-14-2019 | Advertising, Media Consulting, …
Research Nester Pvt Ltd
Smart Wallet Market Show Huge Growth in Future By Increasing Penetration of Smar …
“Smart Wallet Market : Historical Growth (2012-2016) & Future Demand Analysis & Opportunity Evaluation(2017-2024)” Global smart wallet market is expected to flourish at a significant CAGR of 9.6% over the forecast period. Factors such as rising awareness about smart wallet benefits, increasing disable income and rising expenditure on smart technologies are anticipated to drive the demand for smart wallet market. Further, smart wallet market is witnessing the launch of improved and
11-01-2016 | Fashion, Lifestyle, Trends
Paulis North End
Send Love Through a Sandwich
WHAT: As the age-old saying goes, “sharing is caring,” and on Thursday, November 3rd, 2016, Pauli’s, the neighborhood sandwich shop located in Boston’s North End, is celebrating National Sandwich Day with “Send a Sandwich,” allowing customers to call ahead and pre-pay for a sandwich order to send to that special someone. Famous for their “wicked fresh” ingredients and “crazy
07-21-2008 | Industry, Real Estate & Constr …
Fabio Perini S.p.A.
Procter & Gamble Chooses Fabio Perini S.p.A. Technology
LUCCA/CINCINNATI, July 21, 2008 -- The Procter & Gamble Paper Products Company, Cincinnati, Ohio, USA, has selected Fabio Perini S.p.A. to supply new converting machinery. P&G has awarded purchase orders to the Lucca, Italy-based Fabio Perini S.p.A. for TIME® Rewinders, and Non-Stop Unwinds. Other components including tail sealers, log accumulators, log saws, and core machines complete the supply. Quantities ordered and installation locations were not specified. The Perini machines will be used to
05-28-2008 | Tourism, Cars, Traffic
ReservaCar Dublin Airport
Tuscany Fine Villa Rentals partnered with ReservaCar Dublin Airport
Tuscany Fine Rentals offers villas in Tuscany, now allows customers to book car rental too. As a result of cooperation between Tuscany Fine Rentals and ReservaCar Dublin Airport, holiday makers can book their holiday accommodation in Tuscany and car rental on www.tuscanyfinerentals.com/villas.php Staying in a villa in Tuscany is great, because it gives holidaymakers the freedom and independence to come and go, just as and when it suits them. People are
04-07-2008 | IT, New Media & Software
Active Communications International
Corporate Network Security
Milwaukee, WI —April 7, 2008— Active Communications International (ACI) announced the Corporate Network Security Conference scheduled for June 19 - 20, 2008 in Washington, D.C. How Corporations can Achieve Optimal Protection to Defend Themselves from Cyber Criminal Activity Nearly 672 electronic records containing confidential information are compromised every 5 minutes. These compromises are caused by internet hackers as well as internal errors. Some exposure of data is accidental, caused by
Comments about openPR
9 o'clock: discuss press release with client, 10 o'clock: submit release to openPR, within the briefest possible time release is published and displayed in a prominent place on openPR.de. I am thrilled!
Zehra Spindler, Calypso Now! - Communication Agency