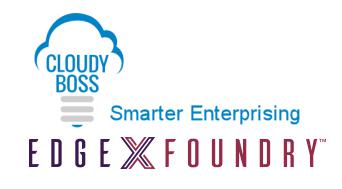 Following the successful IoT Congress in Barcelona last month, where the first release of the Dell-seeded EdgeXFoundry was showcased, negotiations for an alliance with Australian ERP developer, cloudyBoss were finalised.EdgeXFoundry is a vendor-neutral open source project hosted by The Linux Foundation building a common open framework for IoT edge computing. Members include Dell, Samsung, AMD and Toshiba. At the heart of the project is an interoperability framework hosted within a full hardware- and OS-agnostic reference software platform to enable an ecosystem of plug-and-play components that unifies the marketplace and accelerates the deployment of IoT solutions.cloudyBoss was unaware of EdgeXFoundry until recently and was working on a similar framework it calls DDL (Data Device Layer) which EdgeXFoundry has already developed to an advanced stage. The EdgeXFoundry solution was attractive to cloudyBoss as it enables cloudyBoss to simply capture the vast amount of data required for its embedded machine learning and AI. cloudBoss’s pioneering work with smart cities and industry verticals such as the aged care sector will quickly benefit from such alliance. For example, with aged care, EdgeXFoundry enables cloudyBoss to collect sensitive data, such as patient information, from a multi-vendor range of sensors, beacons and other devices, which is essential to its 360.eldercare vertical solution and extends device choice for end-clients.Until now, there has been serious scepticism about the security of sensitive data harvested from many different sources and shared via the cloud. This was a potentially limiting problem for some EdgeXFoundry members. Members were particularly interested in the comprehensive solution that cloudyBoss has devised with its unique user-defined, block-chained organisational clusters. The cloudyBoss solution enables the secure real-time flow of data and processes between members, using a military grade architecture, which allows them to work safely and securely in unison.“Our alliance with EdgeXFoundry accelerates technology smartness by shortening development time and redirecting engineering resources toward generalised Machine Learning with graphics, text and numerical data, interoperable data connectors for non-IoT data streams and now EdgeXFoundry for anything IoT. For clients, this means that they’ll soon access features such as trend predictors, organisation auto-pilots, as part of their NEXT+ baseline enterprise engine, and will be able to leverage continuously evolving industry-based ML training datasets from each of our 360 solutions. In addition to cluster business via our native enterprise blockchain hyper-ledger architecture, cloudyBoss is a de facto global benchmark for enterprise management in the post-ERP era.” Says CTO Giovanni Di Noto CEO, Lou Schillaci followed on by saying “Just being the first Australian company to align themselves with the EdgeXFoundry, demonstrates our commitment to IoT and our continued desire to future-proof the cloudyBoss ERP eco-system.”Philip Des Autels, Executive Director of EdgeXFoundry and Director of IoT at the Linux Foundation, concluded by stating: “We are looking forward to having cloudyBoss on as a contributor and member.”For more information contact CEO, Lou Schillaci. Ends/ Media Information Claire Linley Lou Schillaci claire@novitagroup.com lschillaci@cloudyBoss.comA unique 360° Ecosytem comprising of ERP with more than 300 Functions and so much more. Vertical Market Solutions Co-Creation Tools Multi-national as a Service Always On, Always Available, Any Device Laptops, desktops, smartphones and tablets.cloudyBoss Pty Ltd 802 Pacific Hwy Suite 1A, Level 2 Gordon, Sydney, 2072 Australia

11-02-2018 | IT, New Media & Software
cloudyBoss
Finally, Blockchain Hype becomes Reality for Business
Finally, Blockchain Hype becomes Reality for Business Newly developed Distributed Ledger Technology creates new software category and delivers real-world benefits to business Release Date: November 1st 2018 Award-winning software developer, cloudyBoss is well known for solving real-world problems through innovation. With the launch of the latest version of its key product, NEXT+™, cloudyBoss is inventing a completely new category of enterprise ecosystem. With Blockchain Distributed Ledger Technology built into its core, NEXT+ establishes
03-23-2018 | Business, Economy, Finances, B …
cloudyBoss
COBRA: Blockchain banking beyond crypto
SYDNEY, AUSTRALIA, 21 March 2018 Whilst incredible stories of financial gain and, more recently loss, have been attributed to crypto currencies, the real story behind crypto is the need for an overhaul of our banking system. What has driven the rise in crypto popularity is, fundamentally, the requirement for better access to banking facilities, the need for more flexibility in banking products, the expanded need for international banking, and
11-14-2017 | IT, New Media & Software
cloudyBoss
cloudyBoss announces SKY, the $1 per day Blockchain Cluster solution
SYDNEY, AUSTRALIA, November 14, 2017 Following the rapid growth of cloud-based commercial solutions, data security and protection has become of paramount importance. Although all organisations are affected, of particular note are supply chain and distribution businesses, as well as banking and insurance companies. Many of these organisations struggle to deal with each other through APIs, middleware and the like. This often entails months of complicated and costly implementation, only
04-28-2016 | Business, Economy, Finances, B …
cloudyBoss
Stop chasing Unicorns and take up Judo!
Chasing the mythical unicorn - that rare start-up that skyrockets to over $1bn in value - has never been more futile. It’s not just a matter of tiny odds, in fact only 0.5% of start-ups achieve this, it’s the fact that most businesses are facing the more pressing issue of the Millennial Cliff – a workforce full of young talent that all want to pursue their own thing. Boundary breaking