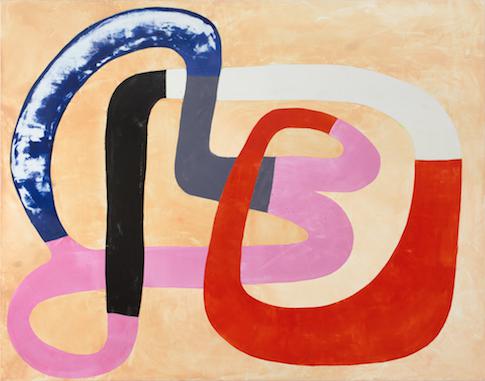 Young artist Wilhelm Beermann shows his latest paintings online at RPR ART until November 30, 2017. This is the second exhibition by the recently founded art advisory business that dedicates exhibition space to selected talented artists from Düsseldorf Kunstakademie.   Wilhelm Beermann was born in Herten, Germany, in 1985. An avid painter from his early childhood, he started his studies in visual arts at the Art Academy in Mainz. In 2014, he continued at the Art Academy Düsseldorf, class of Professor Thomas Grünfeld, from where he graduated in 2017. Since 2013, his work has been shown in numerous exhibitions. The artist lives and works in Düsseldorf.“I paint because it is the only activity that calms me down. But books or screens also work quite well. The object in front of me must be rectangular; then my eyes find peace”, says Wilhelm when asked why he paints.He quotes Gauguin and Cézanne as profound influences for his work: “I frequently go to museums and allow myself the liberty of being a big fan of different artists. It all started with Gauguin. I was maybe eleven or twelve." He also believes that painting has a lot to do with imitation: “The living subject and the works of great artists in the back of the head — both influences the resulting work.” Hence, his brightly coloured paintings reflect his admiration for painters such as Mondrian or Matisse.However, Wilhelm claims, that his paintings are not necessarily "about" something: they are the counterpart to unspecific experiences, a random product from the abundance of everyday influences: "My form language employs constructivism and colour-field painting and is also reminiscent of hard-edge or minimal. At the same time, what surrounds and interests me in everyday life slips in consciously and unconsciously.” such as in his paintings “Untitled, The Bather” (2017), and “Untitled” (2016). The young painter’s ambition is to create images that do not portray a specific period or space, but instead act as a mirror and thus are always new for the beholder. “I believe that a picture can open up a reflective experience in a visual, cognitive, emotional, and spiritual way for both its creator and the beholder.” (“Untitled”, 2017).This consequently led to his decision to predominantly work with lacquer and the smooth surface of aluminium, which underlines the viewer’s reflection in the picture technically as well. He applies different and competing compositional rules using even unconventional tools such as sanders or solvents for his art. Before putting the paint on the carrier, he makes sketches and works out a plan. However, he has never managed to complete a picture according to plan, he explains and points out that “the painting is complete when the compositional elements are positioned in such a way that they enter into a continuous interplay.”See Wilhelm Beermann’s artwork on his website www.wilhelmbeermann.de and buy selected pieces at www.rpr-art.com through November 30, 2017.Read our full interview here.    For further questions regarding the artist’s work or more picture material:Contact: Dr. Ruth Polleit Riechert  Email: rpr@rpr-art.com Mobile: 0049-(0)173-6730052RPR ART is an art advisory business that helps you find art you like and invest wisely. The company supports young talents from art academies.RPR ART Dr. Ruth Polleit Riechert Oelmuehlweg 33C 61462 Koenigstein Germany

09-02-2020 | Arts & Culture
RPR ART
Plastic turns Art: First digital show ALIENATION by Amparo Sard at NEXUS
The exhibition "ALIENATION" by Amparo Sard will open online today. The digital show includes eleven new artworks by the Spanish artist: artworks made of recycled plastic, a sculpture made of perforated aluminium, artworks made of synthetic resin and perforated paper works. The digital exhibition is replacing the planned at Kronberg Castle near Frankfurt due to Corona-restrictions. It is supported by the “Mobility Grant 2020” of the Spanish organization Acción Cultural
06-04-2020 | Arts & Culture
RPR ART
Innovative collaboration: Art on 10,000 public screens across Germany
The media company CITTADINO supports young artists in collaboration with RPR ART. Since the end of May, works of art have been shown on digital screens at airports, shopping centres, roadsides (large digital screens), and motorways in Germany. With over 10,000 digital screens, Cittadino is one of the leading media providers in Germany. The digital art was developed for Cittadino and selected by art historian Dr Ruth Polleit Riechert. The
04-03-2019 | Arts & Culture
RPR ART
Artistic Collaboration between Germany and Spain: Mallorca Residency for Master …
Amparo Sard x RPR ART Mallorca Residency: Four master students develop new works until April 7, 2019 Son Servera, Mallorca. Under the patronage of the Mallorquin artist Amparo Sard, four master students of the Kunstakademie Düsseldorf are developing new works during a three-week artists' stay in Son Servera. The program was initiated by Ruth Polleit Riechert (RPR ART) and lasts until 7 April 2019. The newly developed works will be exhibited
10-30-2018 | Arts & Culture
RPR ART
RPR ART Lab: Four Master Students in Frankfurter AusstellungsHalle
On Thursday, November 8, 2018, the exhibition "RPR ART Lab: Wilhelm Beermann, Ina Gerken, Jonas Maas, Anna Nero" opens at the Frankfurter AusstellungsHalle 1A. The four master students are showing for the first time as a group in Frankfurt and have developed their exhibition especially for the AusstellungsHalle. They know each other from studying together at Kunsthochschule Mainz. Speaker at the opening will be Iris Hasler, a research associate at

02-10-2021 | IT, New Media & Software
Avenga
New Avenga CFO Mario Wilhelm
Cologne, February 10th, 2021 – Avenga, a specialist for implementing complex digital transformation projects, has recruited Mario Wilhelm as its new CFO. In this role, he is responsible for Finance, Reporting and BI, as well as Legal and Compliance at the international IT service provider, which has more than 2,500 professionals at 19 locations in Europe, Asia, and the USA. CFO Wilhelm reports to Jan Webering, CEO of Avenga.
05-25-2018 | Business, Economy, Finances, B …
Market Study Report
Global Otoscopes Market Research Report Analysis: Firefly, HEINE Optotechnik, KI …
Otoscopes are a medical device useful in assisting the physician in making a physical diagnosis of ear-related ailments such as infection, irritation, ear pain, ear discharge, and redness. Otoscopes market to grow at a CAGR of 4.02% during the period 2018-2022. The prime objective of Otoscopes Market report is to help the user understand the market in terms of its definition, segmentation, market potential, influential trends, and the challenges that the market
09-07-2017 | Advertising, Media Consulting, …
Spire Market Research
Paint Spraying Machines Global Market Size 2017-2022 Wagner, Graco, BLACK& DECKE …
Paint Spraying Machines Market Research Report A market study ” Global Paint Spraying Machines Market ” examines the performance of the Paint Spraying Machines market Size 2017. It encloses an in-depth Research of the Paint Spraying Machines market state and the competitive landscape globally. This report analyzes the potential of Paint Spraying Machines market in the present and the future prospects from various angles in detail. Request For Sample Report: http://bit.ly/2eLkM86 The
08-04-2017 | Energy & Environment
EOMAP GmbH & Co.KG
Marie-Luise Wilhelm joins EOMAP as new director marketing & communications
Seefeld, July 2017 - Optical remote sensing company EOMAP has appointed Marie-Luise Wilhelm as new director marketing & communications. Her new role will include all corporate identity functions, global communications, content and social media marketing. Wilhelm studied business administration and journalism in Munich and Berlin and has held senior marketing roles nationally and internationally in academia, consulting and the IT industry. EOMAP GmbH & Co.KG, headquartered in Seefeld near Munich in Germany,
07-26-2017 | Business, Economy, Finances, B …
GlobeMetrix
Global Paint Sprayer Market 2017: Wilhelm Wagner, BLACK& DECKER, Graco, Wagner
Global Paint Sprayer research report provides the complete and precise view of the market during the forecast period from 2017-2022. The Paint Sprayer market Report enlists the different factors which can help the readers in transforming their knowledge into vital business decisions. To start with the Paint Sprayer report analyses the market development based on market gains, extensive product applications, dominant market regions and the companies within these regions. At an
06-19-2017 | Business, Economy, Finances, B …
GlobeMetrix
Global Painting Machines Market 2017 - EXEL Industries, Cefla Finishing, Walther …
The Painting Machines Market 2017 examines the performance of the Painting Machines market, enclosing an in-depth judgment of the Painting Machines market state and the competitive landscape globally. This report analyzes the potential of Painting Machines market in the present as well as the future prospects from various angles in detail. The Global Painting Machines Market 2017 report includes Painting Machines industry volume, market Share, market Trends, Painting Machines Growth aspects,
Comments about openPR
OpenPR is clearly structured and remains true to its principle of confining itself to the essential parts. OpenPR has proven to be a very good and reliable partner to our media agency: Within the shortest time the releases are online and go down well with the media representatives. The success of OpenPR is reflected in the steadily increasing number of press releases. It is good that OpenPR exists!
Ursula Koslik, Director Marketing & PR, F+W Hamburg