Protestants are Returning to Rome 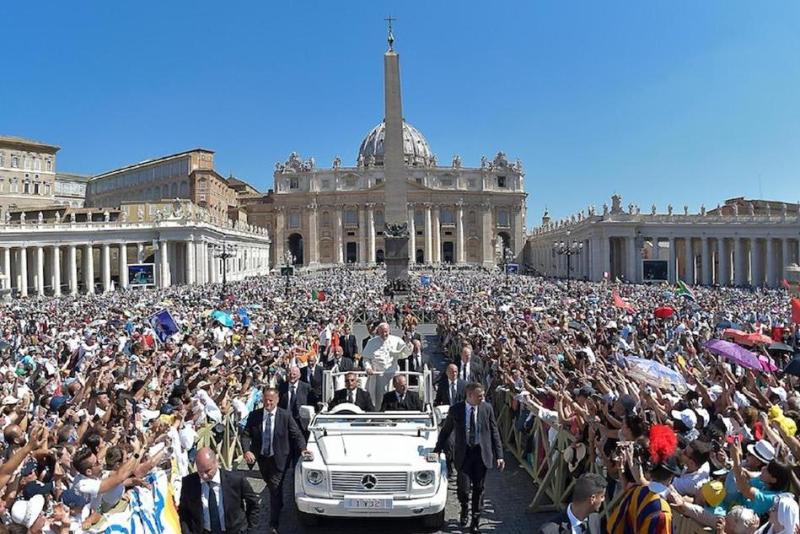 All Roads Lead to Rome

We are seeing the final act of the drama develop before our eyes. The union of all the churches is an event of the end-times that will happen only one time - unlike wars, earthquakes and famines which are events that repeat themselves throughout history. Protestants are becoming absorbed into the Roman Catholic Church and this significant act on the part of Protestantism will lay the foundation for setting up the image of the beast in America."And his deadly wound was healed: and all the world wondered after the beast.” Revelation 13:3.A new poll has come out confirming that Catholics and Protestants have become indistinguishable from each other. Pew Research Center conducted a survey on the eve of the 500 Anniversary of the Protestant Reformation that states that both Protestants and Catholics in Europe and in the U.S. "now overwhelmingly express a willingness to accept each other as neighbors and even as family members." (http://www.pewforum.org/2017/08/31/after-500-years-reformation-era-divisions-have-lost-much-of-their-potency)According to the new poll, in Protestant Germany, the birthplace of Martin Luther's Reformation, 78% of Protestants believe that their distinctive faith is more similar and more in common to Roman Catholicism and only 19% of Protestants believe the two faiths are actually "different." These feelings that Protestants and Catholics have more similarities than differences is also shared by Roman Catholics and Protestants all throughout Europe and even in America. This is what 50 years of ecumenism will do to you; it will bring you back to Rome.Rome's agents have used the ecumenical movement to first bring the Protestant Churches to the table, and now after 50 years of "dialog" they have come to view matters in the same light. Protestantism is now converting over to Roman Catholicism and is "wondering after the beast." All of Europe is going over to Rome and Protestant America is next in the agenda:"The Protestants of the United States will be foremost in stretching their hands across the gulf to grasp the hand of Spiritualism; they will reach over the abyss to clasp hands with the Roman power; and under the influence of this threefold union, this country will follow in the steps of Rome in trampling on the rights of conscience" (Great Controversy, 588).The image of the beast is forming before our eyes as we see these words being fulfilled. When this prophetic statement was written over 100 years ago, at that time any hopes of reconciliation between Catholics and Protestants seemed impossible to everyone. But look at the situation today - Protestants can't seem to compromise their faith fast enough! They are running to Rome for reconciliation and are shedding the image of being a "rebellious daughter." They are returning by and large, collectively, to their "mother church."The overwhelming majority today see these previously irreconcilable faiths as identical in almost every way. When Rome looks at the Protestant churches she sees an image of herself. This is scary when you think about it because Rome never changes. The goal of Rome has almost been complete, which is to totally abolish the Reformation's "protest." The old, long-standing, historical, Protestant faith with its protest has been an obstacle in preventing Rome from regaining her supremacy in both spiritual and political matters. However, every obstacle that is standing in the way must be removed as Rome achieves her ultimate objective. The Reformation's protest has been silenced all thanks to the disastrous results of the Vatican-Protestant interfaith dialog and cooperation. May this be a warning sign to every church and to every Christian believer."It was by associating with idolaters and joining in their festivities that the Hebrews were led to transgress God's law and bring His judgments upon the nation. So now it is by leading the followers of Christ to associate with the ungodly and unite in their amusements that Satan is most successful in alluring them into sin. 'Come out from among them, and be ye separate, saith the Lord, and touch not the unclean.' 2 Corinthians 6:17" (Patriarchs and Prophets, 458).About: Advent Messenger provides news and commentary on current events, top stories, social trends and political and religious events. For more news visit www.adventmessenger.orgContact: Andy Roman, Publisher Address: Advent Messenger, PO Box 96, Dover, OK 73734 Phone: (888) 299-2119 Website: www.adventmessenger.org Email: info@adventmessenger.org

05-19-2021 | Leisure, Entertainment, Miscel …
Advent Messenger
Adventists Embrace “Eucharistic Hospitality” on Their Journey Toward Christi …
Fatal heresies are attempting to undermine the foundations of our faith. A false and misguided unity is bringing all the churches together and they are exalting Romanism (the Holy Eucharist) and ecumenism above the word of God. There is an endeavor underway in the ecumenical movement to eliminate the practice of closed communion. The "Eucharistic Hospitality" is the fruit of 60 years of ecumenism. It is a modern ecumenical ceremony
05-08-2021 | Arts & Culture
ESBO ltd
Religion In America Is Not As You Might Think It Is
Religion in the United States often takes center stage in the news and in various media outlets. However, what some might want watchers to think is different than reality. In fact, there is a documented shift that already happened. Between 2007 and 2014, the number of religiously unaffiliated people went up from 16% to 23%. If you want to be aware of how religion really is represented in USA, here
08-26-2020 | Leisure, Entertainment, Miscel …
Advent Messenger
900 Catholic Masses for President Donald Trump
With only three months to go until the November 3, 2020 presidential election, the Trump 2020 campaign is working hard to attract Catholic voters. The Trump campaign has a website to court the Catholic vote. It is called Catholics for Trump 2020 and it is motivating Roman Catholics to support the re-election of Donald Trump by appealing to the abortion issue. The website says: “Catholics for Trump will energize and activate
11-01-2017 | Leisure, Entertainment, Miscel …
Advent Messenger
The Tragic end of the Protestant Reformation
The Protestant Reformation's greatest moment came when Martin Luther sat in the Diet of Worms during his climatic defense of the Holy Scriptures. Facing the threat of execution, Luther stood on trial before the Roman Catholic Magistrates to answer the accusation of heresy because he was being accused of challenging the Church's teachings and for defying the pope.  When asked to recant his positions, Luther famously replied with the statement:
05-22-2017 | Arts & Culture
Wiedmann Media AG
The Biblical Stories in 360 degree - one of a kind Bible as Virtual Reality
Becoming a part of the Garden of Eden or attending the Last Supper. At the German Protestant Kirchentag in Berlin the Wiedmann Bible shows visitors a way how to experience the Holy Scriptures in a completely new way. It depicts the complete Old and New Testament solely through images - 3,333 to be precisely. This makes the Wiedmann Bible not only unique but also opens opportunities for a new access through
04-20-2011 | Associations & Organizations
Riderwood
Village Protestant Church at Silver Spring, MD, Retirement Community Has Worldwi …
SILVER SPRING, MD (April 20, 2011) – Members of the Village Protestant Church at Riderwood retirement community have donated nearly $300,000 for missions and outreach in the past four years, including more than $6,400 donated this month for earthquake/tsunami humanitarian relief in Japan. This financial contribution was forwarded to Samaritan’s Purse, headquartered in North Carolina, which has people already on the ground in Japan to render assistance. Members of the
Comments about openPR
OpenPR is clearly structured and remains true to its principle of confining itself to the essential parts. OpenPR has proven to be a very good and reliable partner to our media agency: Within the shortest time the releases are online and go down well with the media representatives. The success of OpenPR is reflected in the steadily increasing number of press releases. It is good that OpenPR exists!
Ursula Koslik, Director Marketing & PR, F+W Hamburg