The Tragic end of the Protestant Reformation 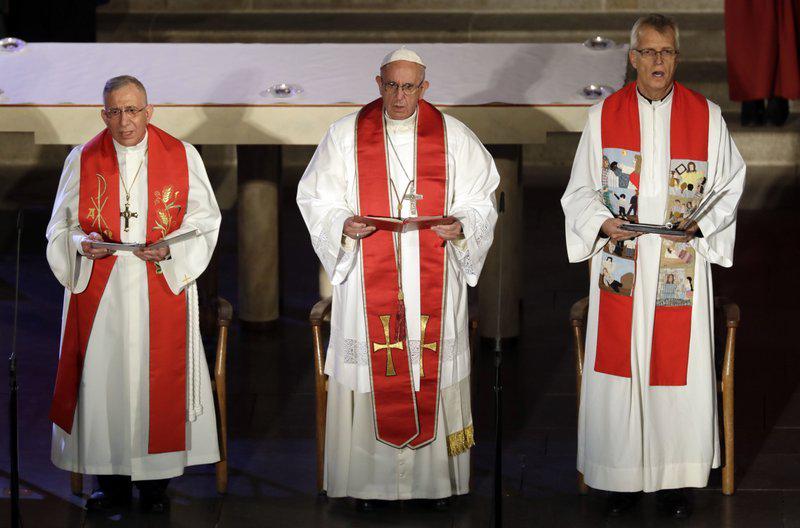 500 Year Anniversary of the Reformation

The Protestant Reformation's greatest moment came when Martin Luther sat in the Diet of Worms during his climatic defense of the Holy Scriptures. Facing the threat of execution, Luther stood on trial before the Roman Catholic Magistrates to answer the accusation of heresy because he was being accused of challenging the Church's teachings and for defying the pope.  When asked to recant his positions, Luther famously replied with the statement:  "Here I Stand. I cannot do otherwise. God help me."

Without hesitation, Luther upheld the clear teachings of Scripture above the church and the encyclicals of the pope. He was excommunicated and lived under the threat of martyrdom for the rest of his life. That was how the Reformation began.

Today we are on the path to full unity with the Catholic Church; a church that has not changed any of her doctrines. It is Protestantism that is making all the concessions! The Pope still claims universal authority over the entire Christian world. He still claims infallibility. He claims to be the final authority in religious matters thereby placing himself above God’s Word. The Pope still claims to be the Vicar (representative) of Christ. According to the Bible (John 14:16) the Holy Spirit is Christ’s representative, not a mere man. Rome still claims to forgive sins and they still believe they have the authority to change God’s law. They still command their members to worship and pray to idols, Mary and all the dead saints. They still believe in purgatory, indulgences and tradition.

The doctrinal questions raised by Martin Luther have not been resolved. How can we just ignore this reality? Where are the Reformers who used to protest these aberrations of Scripture? There’s hardly any left. Sadly, we are heading right back into the Dark Ages because the heirs of the Reformers have now rejected the principles of the Reformation. Whenever a people is divorced from their own heritage and belief system they will not stand long. Indeed, Protestants will continue to be blown away with every wind of doctrinal and cultural wind - gay clergy, same-sex marriage, women's ordination, abortion, and a list of other issues because of her rejection of the Scriptures. This is opening the door to confusion, religious relativism, pluralism and the dilution of Bible doctrine.

"But God will have a people upon the earth to maintain the Bible, and the Bible only, as the standard of all doctrines, and the basis of all reforms. The opinions of learned men, the deductions of science, the creeds or decisions of ecclesiastical councils, as numerous and discordant as are the churches which they represent, the voice of the majority,—not one or all of these should be regarded as evidence for or against any point of religious faith. Before accepting any doctrine or precept, we should demand a plain Thus saith the Lord” in its support" (Great Controversy, 595).

08-26-2020 | Leisure, Entertainment, Miscel …
Advent Messenger
900 Catholic Masses for President Donald Trump
With only three months to go until the November 3, 2020 presidential election, the Trump 2020 campaign is working hard to attract Catholic voters. The Trump campaign has a website to court the Catholic vote. It is called Catholics for Trump 2020 and it is motivating Roman Catholics to support the re-election of Donald Trump by appealing to the abortion issue. The website says: “Catholics for Trump will energize and activate
08-26-2020 | Leisure, Entertainment, Miscel …
Advent Messenger
Adventists, Catholics and Protestants Become Members of the Same Order of Knight …
On June 29, 2020, Seventh-day Adventists in the country of French Polynesia joined Roman Catholics, Mormons, Protestants, educators and other prominent members of the nation to be included as Knights in the Order of Tahiti Nui. They were inducted by the Grand Master of the Order of Tahiti Nui, Edouard Fritch, who is also President of French Polynesia. We are moving from interfaith dialogue to becoming members of the same
07-28-2020 | Politics, Law & Society
SCJ News Victoria
International Scholars Raise Concerns over “an Attempt to Destroy a New Religi …
On July 20, a webinar on a new religious movement in South Korea and its political, religious, and social dimensions with the recent COVID-19 crisis invited international scholars and experts in the field of religion, international law, and human rights. Titled “COVID-19 and Religious Freedom: Scapegoating Shincheonji in South Korea”, the webinar addressed the recent issues of aggressive attack from politically powerful conservative and fundamentalist Protestant churches in the country on
11-02-2017 | Leisure, Entertainment, Miscel …
Advent Messenger
Protestants are Returning to Rome
We are seeing the final act of the drama develop before our eyes. The union of all the churches is an event of the end-times that will happen only one time - unlike wars, earthquakes and famines which are events that repeat themselves throughout history. Protestants are becoming absorbed into the Roman Catholic Church and this significant act on the part of Protestantism will lay the foundation for setting up
05-22-2017 | Arts & Culture
Wiedmann Media AG
The Biblical Stories in 360 degree - one of a kind Bible as Virtual Reality
Becoming a part of the Garden of Eden or attending the Last Supper. At the German Protestant Kirchentag in Berlin the Wiedmann Bible shows visitors a way how to experience the Holy Scriptures in a completely new way. It depicts the complete Old and New Testament solely through images - 3,333 to be precisely. This makes the Wiedmann Bible not only unique but also opens opportunities for a new access through
04-20-2011 | Associations & Organizations
Riderwood
Village Protestant Church at Silver Spring, MD, Retirement Community Has Worldwi …
SILVER SPRING, MD (April 20, 2011) – Members of the Village Protestant Church at Riderwood retirement community have donated nearly $300,000 for missions and outreach in the past four years, including more than $6,400 donated this month for earthquake/tsunami humanitarian relief in Japan. This financial contribution was forwarded to Samaritan’s Purse, headquartered in North Carolina, which has people already on the ground in Japan to render assistance. Members of the
Comments about openPR
I can't but agree to the positive statements about your portal: easy to use, clear layout, very good search function, and quick editing!
Jens O'Brien, Borgmeier Media Communication