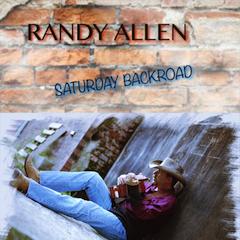 FOR IMMEDIATE RELEASEAsheville, North Carolina — March 27, 2017 — New Single from Country Singer/Songwriter RANDY ALLEN “Saturday Backroad” Set for Release on April 1, 2017 You can get it NOW at www.randyallen.net It will be Available for download at CD Baby and iTunes Mobile Music Apps Other songs available with Pre-Orders include “Alone In Memphis“ and “Tell Me”Nashville acclaimed Country Artist RANDY ALLEN is breaking ground with a Fresh New Sound! Putting his Traditional touch on todays Sound and giving it that Country FEEL! RANDY has paved his way in country music since his two year run with KMA Records in 2009 and obtaining a #1 Hit with “DADDY” This will be his second release following a prior release in 2011 of “ Up Above It All “ Available at iTunes.Country Fans need to support Country Music, By buying albums and concert tickets for Traditional Artists or the music will just fade away and that would be really sad. George JonesIf you work hard enough at what you love, You’ll be rewarded with many blessing! Randy AllenOnce you replace negative thoughts with positive ones, You’ll start having positive results Willy NelsonRANDY ALLEN, A North Carolina Native who lives in the Beautiful Mountains of Western North Carolina has been performing in his home state and gaining recognition in the Nashville Music community over the years. He’s back in the Spotlight ready to perform his Brand New Single “ Saturday Backroad “ “ I Penned this song sitting in my living room, It came about from a conversation. A couple met awhile back and then reunited by there teenage daughter ” How “SWEET” is that!Following the Single Release of “Saturday Backroad” There will be Two more Single Releases to follow. The EP will be completed by Summer of 2017 with Tour Dates to follow. We will be looking forward to gaining local radio and press interviews and Album reviews in the coming monthsPreview the tracks and Pre-order the EP Now http://www.randyallen.net###ABOUT Randy Allen’s interest in music spawned at a young age with Merle Haggard and George Jones inspired his five-year-old mind. Becoming a dad sooner than later, he had to put his music career on hold for awhile and focus on providing for his family. Years down the road he won a contest in 2003 that allotted him a record deal, and a few years later his debut was out. Fast forward to 2016, a year spent focusing on his third release, Saturday Backroad – Randy poured his heart into this album filled with various stories of love, and cannot wait for fans to hear his traditional country sound come alive. http://www.randyallen.netCONTACT RANDY ALLEN Randall Cooke P.O. Box 1093 Etowah, NC 28729 704-402-6035 rtrentertainment@randyallen.net

11-02-2017 | Leisure, Entertainment, Miscel …
RTR Entertainment RANDY ALLEN
New Single Released to Radio
PRESS RELEASE FOR IMMEDIATE RELEASE Nov 2 | Posted by: Tribe Team New Single Released to Radio! Randy and his team have joined forces with Radio to release his New single "Saturday Backroad". He has been in Nashville working on the new project over a couple years since his 2011 KMA Records release. Now he's back ready to take the spot light and present all of his brand new music your sure to love. The