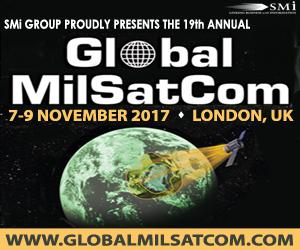 SMi’s Group’s 19th annual Global MilSatCom is gearing up to be the most attended conference in its 19-year history. SMi’s Global MilSatCom 2017 will open doors in two weeks at the Park Plaza Riverbank Hotel in London with an expected turnout of over 500 delegates from nations and organisations including Belgium, Brazil, Canada, Canada, China, Czech Republic, Denmark, Ethiopia, France, Germany, Ghana, Israel, Italy, Japan, Luxembourg, Netherlands, Nigeria, Norway, Poland, Singapore, South Korea, Spain, Sweden, Turkey, Ukraine, United Arab Emirates, United Kingdom, USA and more.This year’s event has seen a record-breaking level of military delegation. With 30% more military attendees than last year’s show, this has been the highest number of military representatives Global MilSatCom has seen in its 19-year history. The 2017 conference agenda has also been finalised and features a line-up of over 50 defence satellite communications experts. With 40+ presentations from leading commercial players and over 20 military and government personnel, the programme will probe the growing demand to enhance SatCom capabilities and to discuss strategies and requirements. There will also be panel discussions exploring the three definitive milsatcom themes this year, including GovSatCom, Wideband AoA, and ground segment innovations. “This year’s programme is inarguably the best and most international in the event’s history,” SMi Managing Director Dale Butler said. “Delegate numbers are up by 30% and the event is looking to attract around 500 attendees this year, which will be a new record for the conference series.”The full roster of speakers and presentations can be found on www.globalmilsatcom.com/openPR.For those interested to attend, there is still a limited number of spaces left. Registration information can be found on the website. 19th Global MilSatCom Conference and Exhibition 7-9 November 2017 Park Plaza Riverbank Hotel, London, UK---ENDS--- Contact Information: For queries on military bookings, contact James Hitchen on jhitchen@smi-online.co.uk. For sponsorship and exhibition details, contact Alia Malick on amalick@smi-online.co.uk. For media enquiries contact Honey de Gracia on hdegracia@smi-online.co.uk.About SMi Group:Established since 1993, the SMi Group is a global event-production company that specializes in Business-to-Business Conferences, Workshops, Masterclasses and online Communities. We create and deliver events in the Defence, Security, Energy, Utilities, Finance and Pharmaceutical industries. We pride ourselves on having access to the world’s most forward thinking opinion leaders and visionaries, allowing us to bring our communities together to Learn, Engage, Share and Network. More information can be found at http://www.smi-online.co.uk1 Westminster Bridge Road, London, SE1 7XW