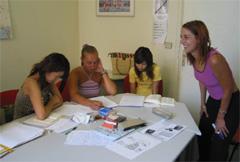 Berlin/Rehlingen, 29.4.2009. StudyGlobal, a worldwide provider of language courses abroad has decided to expand its service to the Czech Republic. Following last year’s successful expansion to Poland, the Berlin office is now the basis for the next step towards new Eastern markets. Since the integration of former Eastern Bloc countries into the EU in 2004 the Czech Republic has seen solid growth. In recent years the high education level attracted many international companies to outsource services. In return the need for language qualification, especially in English, has increased immensely. Therefore StudyGlobal decided to launch a website in Czech by the beginning of 2009. At present already 27 different destinations are offered in Czech language (further are available) including programs to learn English, German, French, Spanish and Chinese. A toll free number has been installed (800 700 605) for the Czech customers to deliver the same high quality service as in all other markets in which StudyGlobal is operating. StudyGlobal is a German-Spanish language course provider with offices in Barcelona, Paris and Berlin. While the brand was established in 2000 the first for Profit Company was founded in Germany in 2002. Since then StudyGlobal has established its headquarter in Barcelona and is offering language course programs for Kids, Juniors, Students, Young Professionals, Managers and Best Agers (50+) and all other language enthusiasts in over 60 destinations around the world. The customers have the choice between English, Spanish, French, German, Italian, Russian and Chinese. Following the “Total Immersion” concept the option to be accommodated in host families is offered in all destinations, assuring the most efficient learning environment. Media contact: Daniel Weber Business Development StudyGlobal GmbH Zimmerstr. 55 10117 Berlin Germany +49 30 20 60 90 70 e-Mail: dweber@studyglobal.com www.studyglobal.net/

03-25-2021 | Associations & Organizations
StudentReach
CHARITABLE GRANTS HELP SACRAMENTO STUDENTS
CHARITABLE GRANTS HELP SACRAMENTO STUDENTS Sacramento, CA: StudentReach today announces a new round of funding through donated laptops at a valuation of $2,000 and a grant of $20,000. This donation of laptops and financial grant comes from Giving Center operating the Learn From Home Project (www.lfhp.org). A valued donor of StudentReach. The nonprofit takes the used laptops that would otherwise be discarded and turns them into refurbished donations for their local
05-04-2017 | Business, Economy, Finances, B …
Ghana Students Discount Card
Ghana Students Discount Card
“Be a student as long as you still have something to learn, and this will mean all your life.” ❤———Henry L. Doherty So, Never stop learning. The world is a fascinating place, with an infinite amount to learn about. And this is the 1st time “The Ghana Students' Discount (GSD) Card” is Worldview International Group initiative with the aim to enhance African student experience and to ensure students pay less for goods
11-12-2012 | IT, New Media & Software
Teracue AG
Coventry University’s Journalism Students Gain
News Room Environment with Multiple Live News Streams Coventry University, located in the heart of Coventry City Centre, was granted university status in 1992 (a modern university). Since then, it has grown to achieve global recognition for many of its undertakings. At the 2011 Times Higher Education Awards, the university was honoured as the ‘Entrepreneurial University of the Year’ and received the ‘Outstanding Support for Students’ award. This year, its very
04-05-2012 | Arts & Culture
Charlotte Academy of Music
Piano Students Named State Winners
Charlotte Academy of Music is pleased to announce that piano students Mikaela Anderson, Melissa Olarte, Meghan Speed and Hannah Williams all earned Superior ratings at the NC Music Teachers Association Piano Contest. These District Winners were invited to perform at the State Piano Contest at Queens University on March 31, 2012. There Mikaela Anderson and Meghan Speed were awarded top honors and invited to perform in the NC
02-09-2012 | Science & Education
Treloar Disabled School and College
Treloar’s students achieve Boccia Success
Past and present students of Treloar’s school and college achieved great results at the South East regional Boccia Championships. Treloar’s school in Hampshire is once more celebrating its sporting achievements after the school performed extremely well in the annual Boccia England South East Regional Boccia championships over the weekend of the 28th and 29th January 2012 in Woking. Boccia is a recreational sport that was originally designed for people with
03-28-2011 | Science & Education
Pass the Exam !!
Study card app designed from students for students
Flash cards are usually one of the speediest techniques in order to benefit educate mental performance while studying different information. Pass the Exam is a brand-new App for i-phones, iPads and also iTouch which in turn captures such time tested training instrument plus presents the software a great Twenty first Century overlook. This progressive completely new attributes associated with Pass the Exam make it easy for participants to quickly generate and
Comments about openPR
OpenPR ist the nicest and most clearly laid out PR platform I have seen to this day. The press releases are displayed very nicely and clearly and without any unnecessary frills. The updates are fast and the finished release looks appealing and is clearly legible. Even with 16 years of experience one discovers new things from time to time. Congratulations!
Gabriele Ketterl, Director Marketing & PR, Menads