LOOS RUSSIA on the road to success 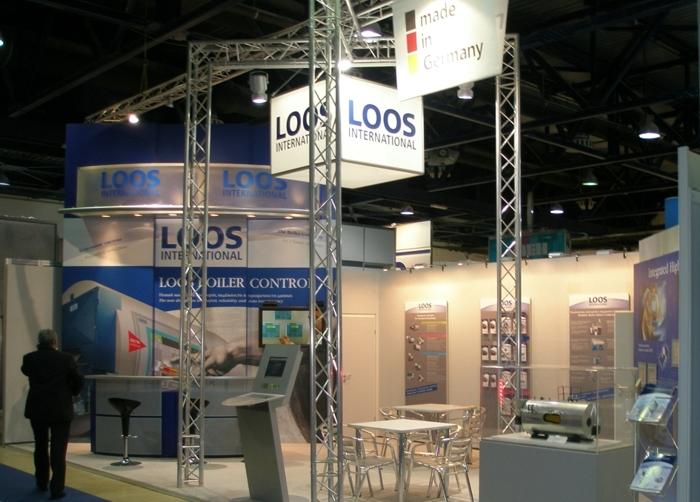 LOOS has been active in the growth market of Russia since the beginning of the 1970s. Since then, hundreds of Russian customers have discovered the superb quality of modern LOOS steam and hot water boilers. Because of the huge importance of the Russian market for LOOS, a separate representative office – LOOS RUSSIA – was established in Moscow at the beginning of 2007.

The extensive LOOS product range is offered and marketed in Russia fully and without restrictions. All LOOS products comply with Russian regulations and have Rostechnadzor permits and GOST-R certificates.

Alongside customers from industrial, craft and service operations, many State institutes and facilities are also now using LOOS steam and heat generators. They are enormously popular in Russia. The most important reasons given for their purchase are their first-class quality, efficient use of energy and fully automatic operation. In the last few months alone, LOOS RUSSIA has been awarded the following contracts, amongst others:

- Three UL-S single-flue boilers with a steam capacity of 18,000 kg/h per boiler with integrated economisers and corresponding boiler house components were supplied to the Heineken brewery in Nizhny Novgorod through plant engineers UESK KORAL, Ekaterinburg.

- The plant engineers LPM-Teplostroy, Kaliningrad, were awarded the contract for the supply of two fully equipped UNIVERSAL UL-S steam boilers with a capacity of 2,000 kg/h each to the gas company Gazprom.

- Two UT-HZ double-flue boilers for heating and hot water generation, each with a capacity of 32.5 MW, were ordered for an exhibition site in Moscow through the plant engineers OOO TISS, Moscow.

- The plant engineers Novaterm, Nizhny Novgorod, were awarded the contract for the boiler house for the first Ferrero factory in Russia. Two LOOS steam boilers, with a steam capacity of 8,000 kg/h each, were used.

LOOS is convinced that only planners, plant engineers and boiler manufacturers together can provide an optimum solutions for the end customer. In Russia, as in the rest of the world, working together in partnership is a is permanent part of the corporate policy operated by LOOS INTERNATIONAL.

Since its establishment, the number of direct contact partners in the team in Russia has already doubled. LOOS RUSSIA is intending to continue its expansion, which will benefit both our Russian customers and also the planners and plant engineers.

Since its foundation in 1865, LOOS INTERNATIONAL has concentrated solely on boiler systems, thanks to this total specialisation, it is now the market leader, with over 100,000 boiler systems supplied to customers in more than 140 countries. The company produces around 1,500 steam and hot water boiler systems a year for all industrial and commercial applications. Cutting-edge production plants solely in German-speaking areas ensure a standard of quality that is confirmed by official test certificates and quality seals from almost every approval authority and certification institute in the world.

The LOOS INTERNATIONAL range of products includes steam boilers in a performance range up to 55,000 kg/h. In addition, LOOS makes hot water boilers for outputs up to 38 MW and heating boilers up to 19.2 MW. The boiler series are made in all pressure levels and for all liquid or gaseous fuels. LOOS boiler house components use modular technology to facilitate the planning, construction and operation of the boiler systems. The close-knit customer service network, available around the clock, plus the 24-hour spare parts service round off the programme and ensure minimal reaction times.

11-24-2009 | Energy & Environment
LOOS INTERNATIONAL
LOOS U-MB boiler provides private clinic with steam
The new U-MB steam boiler model series from LOOS INTERNATIONAL, a company of the Bosch Group, was presented to the public at the international ISH trade fair in Frankfurt, packaged in a multimedia artistic show. Interest in the new product was enormous, and projects and orders were soon pouring in. One of the first U-MB boiler systems provides an efficient supply of steam for the kitchens and sterilisers of the
05-26-2009 | Energy & Environment
LOOS INTERNATIONAL
LOOS boilers ensure peak load and emergency supply
Springing into action when there are bottlenecks and being available around the clock in case of emergencies: if it were a job advertisement, the response would probably be limited. But LOOS boilers used in power stations frequently have to meet precisely these challenges. Basic heating is generally provided by special power-heat-coupled water-tube boilers. Shell boilers, which are easier to use, supplement the systems and act as auxiliary boilers for start-up
04-08-2009 | Energy & Environment
LOOS INTERNATIONAL
ISH Frankfurt – a review
At the ISH trade fair in Frankfurt, LOOS INTERNATIONAL presented the innovations being offered by the company in the steam and hot water boiler sector with the motto "LOOS - the reference for steam and hot water". The product launch of the new UNIVERSAL Modular Boiler U-MB steam boiler series was celebrated as part of a multi-media artistic show. Modular and flexible, fully automatic, easy to maintain and service, low-emission, energy-saving,
11-05-2008 | Energy & Environment
LOOS INTERNATIONAL
Boiler systems for the breverage industry - LOOS steam boilers for the Carlsberg …
Steam or hot water boiler systems have a vital part to play in drinks manufacturing. All the most important production processes, such as pasteurising, sterilising, washing, boiling or cleaning, are supported by steam or hot water. Energy must be provided reliably, economically and by environmentally friendly means. Global players such as Coca Cola, Pepsi Cola, InBev, SABMiller, Heineken and Carlsberg therefore put their trust in LOOS INTERNATIONAL's modern steam and