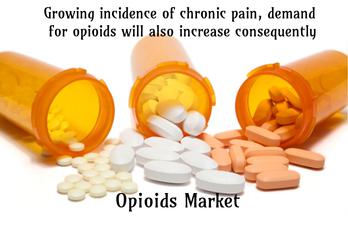 Opioid drugs act on the opioid receptors present in the central and peripheral nervous system. The drug class primarily used in relieving pain includes natural, semi-synthetic, and synthetic opioids. Codeine, morphine, hydrocodone, oxycodone, heroin, and fentanyl are some of the major prescription drugs in the global opioids market. Opioids can be administered as oral pills, parenteral, liquids, patches, or lozenges. Overdose and drug abuse is a major concern for health regulators worldwide, with the situation especially alarming in developed regions with easy access to these drugs. According to the World Drug Report 2016, a staggering 17.4 million people were affected by opioid drug abuse. Drug and health regulators are therefore, taking initiatives to govern pain prescriptions and curb the rate of opioid abuse. The U.S. FDA considers all opioids as schedule 2 drugs—drugs that have high abuse potential. In 2016, the CDC issued guidelines to prescribe opioids, limiting the daily dose of opioids to 90 morphine milligram equivalent (MME).

Request a sample copy of this report: http://bit.ly/2yZW1cP

According to the National Institutes of Health (NIH) estimates published in 2015 by the American Pain Society, nearly 50 million people in the U.S. suffered from chronic pain. Use of opioids in cancer pain, orthopedic pain, neuropathic pain, post-operative pain, and lower back pain is very effective. With growing incidence of chronic pain, demand for opioids will also increase consequently.

North America is the largest market for opioids owing to availability of branded prescription and local products, which inadvertently also leads to drug abuse. There are local unbranded products available for every opioid derivative complementing the available prescription opioid brand. The Centers for Disease Control and Prevention (CDC) states that 73% of all drug overdose deaths in the U.S. in 2015 were due to opioids (57% in 2010). Moreover, emergence of cannabis as an alternative to opioids and legalization of the same in various regions is inhibiting the opioids market growth.

Click here to know more about this publish report: http://bit.ly/2g2A3hS

The U.S. FDA considers all opioids as schedule 2 drugs—drugs that have high abuse potential. Codeine, fentanyl, meperidine, methadone, morphine, and hydrocodone are the most abused prescription opioid analgesics. Contrary to other regions, wherein codeine is expected to dominate the market globally, North America is expected to be primarily driven by sales of hydrocodone opioids. Drug abuse with opioid is characterized by prolonged use or overdosing of the prescribed medication. A 2015 study by the CDC concluded that people who are addicted to prescription analgesics are 40 times more likely to be addicted to heroin. Furthermore, CDC also states that 73% of all drug overdose deaths in the U.S. in 2015 were due to opioids (57% in 2010). Although the use of prescription opioid for non-medical purpose has decreased over 2012–2014, use of heroin has increased significantly during this period. The deaths accounted due to opioid abuse has also increased consequently over the years. According to the National Institutes of Health (NIH) 2015 data, there was a 2.8 fold increase in deaths in the U.S. due to overdose of opioid during 2002–2014. The death incidence rose to nearly 33,000 in 2015 from 23,000 in 2012 in the U.S. Similarly, non-prescription use of cough syrups containing codeine is also a major issue to be addressed.

You can edit or delete your press release Opioids Market to Surpass US$ 25.7 Billion by 2024 here