Smoking Cessation and Nicotine De-Addiction Products Market to Surpass US$ 46.0 Billion by 2024 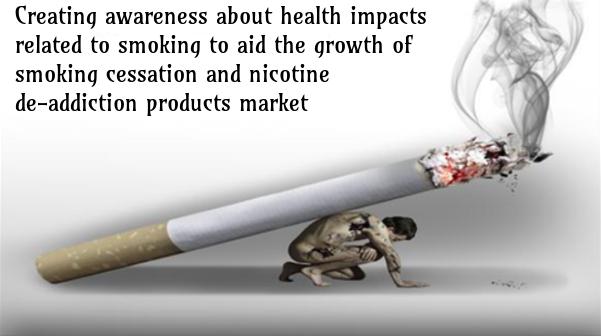 You can edit or delete your press release Smoking Cessation and Nicotine De-Addiction Products Market to Surpass US$ 46.0 Billion by 2024 here

12-17-2021 | Business, Economy, Finances, B …
Fact.MR
Rise in Herbal Smoking to Bolster Sales of Smoking Accessories Market | Roor, Em …
The Global Smoking Accessories Market study covers the projection size of the market both in terms of value and volume. The report estimates the lookup of different local distributors in the overall market and provides the market size of the Smoking Accessories market using both bottom-up and top-down approaches. To Get In-depth Information View Full Report – https://www.factmr.com/report/4872/smoking-accessories-market The report published by WHO states that the demand for tobacco has fallen by 1.3
04-23-2018 | Business, Economy, Finances, B …
Orbis Research
Top Trends in Tobacco and Anti-Smoking Aids 2018 - Exploring the latest trends i …
"Top Trends in Tobacco and Anti-Smoking Aids 2017", explores the latest consumer and innovation trends in cigarettes and smoking tobacco, cigars and cigarillos, smokeless tobacco, and e-cigarettes and smoking alternatives. The report outlines the key consumer and innovation trends currently impacting the core categories in tobacco. These include NPD that aligns with consumer demand for customization or appeals to the experimental consumer (e.g. through exploring alternative ingredients and methods of delivery
01-17-2018 | Industry, Real Estate & Constr …
Perfect Complete Connection
Stop Smoking
Quit smoking suggestions like these to assist you stop smoking have already been about for years. Some of the ideas you will read beneath will connect with you - other people may not. And that's fine. Take a scan by means of them - if some thing clicks give it a try. This is just one of several articles to come, containing tricks to help you quit smoking so come back
06-05-2017 | Business, Economy, Finances, B …
ReportsWorldwide
Smoking Tobacco in Sweden, 2016
ReportsWorldwide has announced the addition of a new report title Smoking Tobacco in Sweden, 2016 to its growing collection of premium market research reports. "Smoking Tobacco in Sweden, 2016" is an analytical report by GlobalData that provides extensive and highly detailed current and future market trends in the Swedish market. It covers market size and structure along with per capita and overall consumption. Additionally, it focuses on brand data, retail pricing,
02-08-2017 | Health & Medicine
TMR
Rising Awareness about Smoking Health Hazards and Smoking Cessation Therapy Driv …
The Centers for Disease Control and Prevention (CDC) reported that there were 44 million adults addicted to smoking in 2011 in the U.S. The majority of these addicts belonged to the low-income groups in the country. On a similar note, the World Health Organization stated that Europe has the biggest pool of smokers, while Asia Pacific has a high percentage of cigarette smokers in comparison to North America and Europe.
09-09-2016 | Advertising, Media Consulting, …
Retail Industry
Top Trends In Tobacco And Anti-Smoking: Flavored Tobacco And Smoking Alternative …
The report presents a comprehensive evaluation of the key trends and future opportunities that are shaped by the needs and behavior of end-users in the tobacco market. The research in the report is backed by relevant examples of innovation. The report presents a 360-degree view of the current trends in tobacco and anti-smoking products consumption. These findings can help market players in learning about flavors and other preferences that successfully
Comments about openPR
We publish our press releases on openPR.de because we like people who are "open" - just like us.
Frank Obels, CEO, INCONET - Informationssysteme, Communication und Netzwerkberatung GmbH