THE GOLMAAL GANG IS BACK WITH NO LOGIC BUT MAGIC WITH “GOLMAAL AGAIN”! 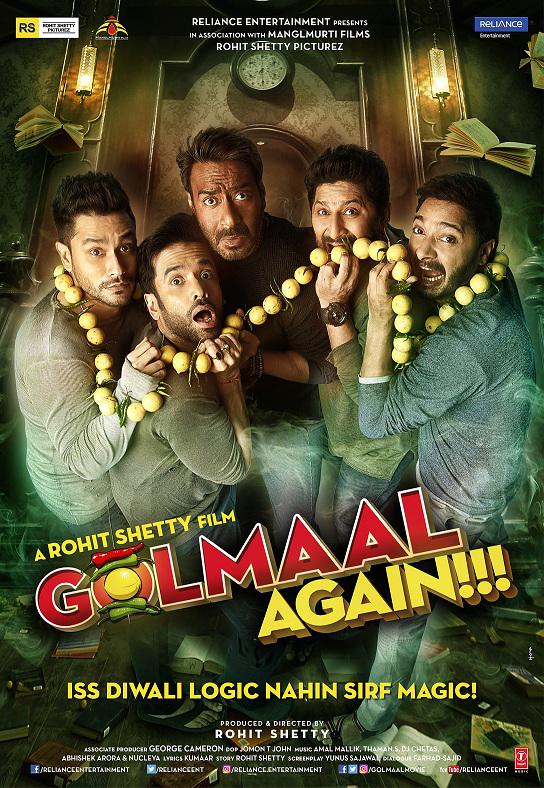 The wait is finally over! The Golmaal gang are back with a bang with the Rohit Shetty directorial Golmaal Again, ready to spook fans across the world this 20th October!

Presented by Reliance Entertainment in association with Mangl Murti Films and Rohit Shetty Picturez, Golmaal Again is Produced and Directed by action film supremo Rohit Shetty who has also conceived the story.

Golmaal Again sees the return of the ensemble super-star cast headlined by Ajay Devgn, Kunal Kemmu, Arshad Warsi, Shreyas Talpade and Tusshar Kapoor. For the fourth instalment they are joined by Tabu and Parineeti Chopra who bring their own sass to the popular film franchise.

The star-studded team released the film’s trailer which has left fans rolling on the floor with laughter and breaking in cold sweat with equal measure.

The trailer stands true to the film’s tagline–“Iss Diwali Logic Nahi Sirf Magic” (This Diwali there’ll be no Logic but only magic), and boasts the classic mix of laughter, mischief, and slapstick humour, blended with bizarre antics, oddity and quirky happenings that will leave you with the chills and giggles throughout!

Golmaal Again is yet another fun filled ride about two rival gangs who are unable to stand each other since their childhood and how they repulse each other even after they grow up. It is yet another hilarious adventure with its fair share of thrills that are sure to surprise the audience and fill their hearts with laughter and joy. It is a film that will surely make everyone laugh, cry and realize the importance of how beautiful life is.

You can edit or delete your press release THE GOLMAAL GANG IS BACK WITH NO LOGIC BUT MAGIC WITH “GOLMAAL AGAIN”! here

12-05-2017 | Media & Telecommunications
Sterling Media
STERLING MEDIA’S GLOBAL CAMPAIGN FOR #WHATIREALLYREALLYWANT WINS THE "GRAND PR …
The award-winning global PR and viral campaign for the film #WhatIReallyReallyWant by Project Everyone, supported by Getty Images and SAWA and launched by the international communications agency Sterling Media, has ended the year on a high after being awarded the prestigious top accolade “Grand Prix” as well as the “Film-Online” award at the Drum Creative Awards 2017. The awards took place on Thursday 30th November at the Emirates Stadium, London, and
10-16-2017 | Fashion, Lifestyle, Trends
Sterling Media
The National Asian Wedding Show where weddings and fashion come to life
With the Indian wedding industry valued at over £12 billion , Europe’s largest and highly anticipated National Asian Wedding Show and India Fashion Week are set to return to the UK on 11th and 12th November 2017, this time debuting at Olympia London. The event spotlights the marriage between the fashion and wedding industry, providing the perfect concoction for bridegrooms to gain a unique opportunity to browse some of the finest
09-07-2017 | Leisure, Entertainment, Miscel …
Sterling Media
‘POSTER BOYS’ SET TO BE WORLDWIDE PIN UPS IN NEW DRAMEDY, 8TH SEPTEMBER 2017
Acclaimed Indian cinema heavyweights Sunny Deol, Bobby Deol and Shreyas Talpade seen in a new avatar in and as the “POSTER BOYS”- a comedy-drama inspired by a real-life incident of three ordinary people who, to their surprise, find their picture on a poster promoting vasectomy. Presented by Dharmendra and Sony Pictures Networks Productions and produced by Sony Pictures Networks Productions, Sunny Sounds and Affluence Movies, POSTER BOYS is slated to
08-22-2017 | Leisure, Entertainment, Miscel …
Sterling Media
Double Dussehra Dhamaka as Varun Dhawan dons a double role in Judwaa 2, releasin …
Brace yourself for an explosion of laughter, mayhem and entertainment, as the deadly trio of Varun Dhawan, Jacqueline Fernandez and Taapsee Pannu join hands with comedy king director David Dhawan to replicate rib-tickling magic this Dussehra, with Judwaa 2, releasing on the 29th of September. Presented by Fox Star Studios and produced by Sajid Nadiadwala’s Nadiadwala Grandson Entertainment, the comic caper “Judwaa 2” sees Varun Dhawan in a

10-27-2017 | IT, New Media & Software
Algoworks
Algoworks Celebrates Diwali Bollywood Style
The 2017 Diwali was different from the earlier Diwalis in the sense that it was brighter, happier, and merrier this year. The decor of the premises was a treat to the eyes as everyone geared up to participate in the ‘Algoworks Film Festival Bollywood Galore’ where each team was to gather maximum points based on how well they decorate their bays and how well they present a five minute act
09-29-2011 | Fashion, Lifestyle, Trends
International Institute of Fashion Technology (IIFT SURAT)
IIFT Surat@ Fashion Fiesta, Lifestyle Mall with Hum Tum Shabana Team
IIFT Students once again showed their jalwa at the Fashion Fiesta on Fri, 23rd Sept at Surat Lifestyle Mall. They got a taste of entire Cast of a rollicking comedy movie, Hum Tum Shabana, who were there at the Lifestyle Mall for the chaotic promotion. Three Cheerz to Mr. Subhash Dawar, the Producer of the movie & owner of Alliance Entertainment, a Surat-based local production house for this Hatke Promotion. IIFT
Comments about openPR
OpenPR is clearly structured and remains true to its principle of confining itself to the essential parts. OpenPR has proven to be a very good and reliable partner to our media agency: Within the shortest time the releases are online and go down well with the media representatives. The success of OpenPR is reflected in the steadily increasing number of press releases. It is good that OpenPR exists!
Ursula Koslik, Director Marketing & PR, F+W Hamburg