A Generation Devoid of Integrity and Justice 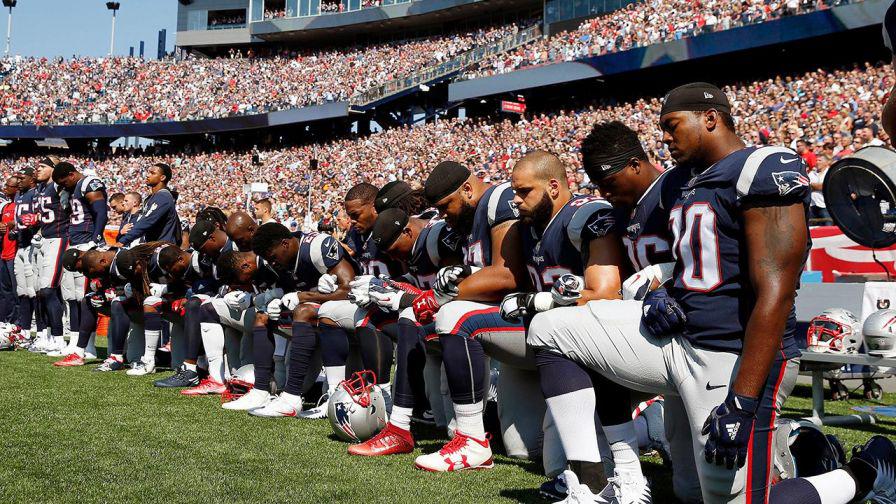 How can we ever have any hope of attaining justice and equality in this nation when one NFL player is praised by the media for kneeling in protest during the singing of the National Anthem and another is condemned by the same media for kneeling in a demonstration of his faith in God?The mainstream media has heaped praise upon Colin Kaepernick because of his refusal to stand during the singing of the National Anthem in an act of political protest and political activism. Now the NFL, the owners, coaches and over 200 players have shown solidarity with Kaepernick by also protesting and refusing to stand for the National Anthem. This received immense, positive media coverage in defense of these protests. Remember, Colin Kaepernick also received media attention for his support of Fidel Castro and for wearing the famous socks of cops being depicted as pigs during football practice.And naturally, the media loves him.Then you have the same media who ridiculed and attacked Tim Tebow without mercy for kneeling during an NFL game to pray whenever he made a touchdown. It's sanctimonious hypocrisy and ridiculous bias when the media praises one NFL player who kneels in protest and crucifies another NFL player who kneels in prayer.Tim Tebow was attacked and accused of mixing sports with religion. The New York Times called him the "most polarizing figure in sports." And he was pushed out of the league. Why was the two-time National Champion, Heisman Trophy winner, and one of the greatest college football players ever - why was he chased out of the NFL? Because he dared to take a stand for God and for life. He was pro-life and made an NFL commercial during Super Bowl Sunday in support of life. And he was mocked for kneeling and praying to God after making a touchdown.This generation hates the very existence and recognition of God. There is a double standard in today's culture and it is based upon the fact that we live in a godless society. When you kneel in defense of left-wing, liberal, political activism you are embraced by the media, but when you kneel to show your love to God you are a villain. You can mix the NFL with politics; however, just leave God outside the stadium.This double standard is replicated daily and at all levels throughout our corrupt culture. It's in the schools, in Hollywood, in politics and now in sports. We will never have truth and justice with this kind of mindset of selective, biased praise towards some and outrage towards others. God despises this very thing:"None calleth for justice, nor any pleadeth for truth: they trust in vanity, and speak lies; they conceive mischief, and bring forth iniquity." Isaiah 59:4."Therefore is judgment far from us, neither doth justice overtake us: we wait for light, but behold obscurity; for brightness, but we walk in darkness." Isaiah 59:9."And judgment is turned away backward, and justice standeth afar off: for truth is fallen in the street, and equity cannot enter. Yea, truth faileth; and he that departeth from evil maketh himself a prey: and the LORD saw it, and it displeased him that there was no judgment." Isaiah 59:14, 15.About: Advent Messenger provides news and commentary on current events, top stories, social trends and political and religious events. For more news visit www.adventmessenger.orgContact: Andy Roman, Publisher Address: Advent Messenger, PO Box 96, Dover, OK 73734 Phone: (888) 299-2119 Website: www.adventmessenger.org Email: info@adventmessenger.org

01-25-2023 | Leisure, Entertainment, Miscel …
Advent Messenger
The Vatican Welcomes Adventist World Radio and G9 Broadcasters: "You are at Home …
On December 13, 2022, the Vatican hosted nine major shortwave radio broadcasters at the historic Vatican Radio headquarters in the Vatican Gardens. Known as the G9 Broadcasters Summit, it was designed to host face-to-face discussions about spreading the message of mercy and hope to the world. The list of G9 broadcasters was also published by Vatican News and is as follows: 1 - Vatican Radio 2 - Adventist World Radio 3 - Encompass 4
01-25-2023 | Leisure, Entertainment, Miscel …
Advent Messenger
Ganoune Diop Joins Bishop Brian Ferrell of the Vatican, Dr. Casely Essamuach, an …
On November 11, 2022, the Vatican's office for promoting Christian unity issued a press release about the annual Conference of Secretaries of Christian World Communions (CS/CWC) meeting. The gathering took place at Broadway Church, a Pentecostal church in Vancouver, Canada. Ganoune Diop, representing the Seventh-day Adventist Church, met with Roman Catholic Bishop Brian Farrell of the Vatican's Dicastery for Promoting Christian Unity and the infamous Dr. Casely Essamuach of the
01-25-2023 | Leisure, Entertainment, Miscel …
Advent Messenger
Giovanni Benini, an ADRA Leader in Italy, is Literally Building Bridges to Rome
Giovanni Benini is head of the Adventist humanitarian agency ADRA in Cesena, Italy. On January 20, 2023, he met with Roman Catholic Bishop Douglas Regattieri for an ecumenical bridge-building exercise. Pope Francis has been advising this particular Catholic bishop on how to advance Catholic social teachings. Giovanni Benini of ADRA is shown in this picture paying close attention to the same bishop who is receiving instructions from Pope Francis. In
01-11-2023 | Leisure, Entertainment, Miscel …
Advent Messenger
Ganoune Diop Showered Praise on Bert Beverly Beach during a Special Tribute
On December 22, 2022, Ganoune Diop, the current Director of the Public Affairs Department and Religious Liberty at the General Conference of Seventh-day Adventists, published a tribute to his predecessor, Bert Beverly Beach. In his tribute, Ganoune Diop called Dr. Bert Beach "a gift to the world of faith and beyond." Diop expressed that Dr. Bert Beach brought "legitimacy and credibility" to Adventism in the eyes of the other "Christian

08-15-2019 | Sports
Nitrogen Sports Blog
Nitrogen Sports' NFL Survivor Pool
Everything is a culmination of a string of decisions. Making decisions is a big part of competing in an NFL Survivor Pool, where there’s no room for mistakes. That doesn’t mean it’s difficult, though. In fact, it’s one of the easiest off-the-field football-related contests that anyone can join. We’re not trying to be profound here. We’re just merely laying out the groundwork of this piece, which aims to introduce what
05-29-2019 | Sports
Maxwell-Scott
New NFL partnership ahead of 100th season announced
International luxury leather brand Maxwell-Scott has entered into an exciting collaboration with Dallas Cowboys’ Xavier Woods and Tampa Bay Buccaneers’ Kentrell Brice for this coming football season. Throughout the 100th season of the NFL Maxwell-Scott will provide both players with luxury leather accessories to accompany their busy schedules, as well as offer an edit of the players’ favorite luggage bags and travel accessories. The players have chosen pieces that will
04-07-2011 | Sports
Attorney Services, Legal Services and Resources
Will 2011 Be The Year Without An NFL Season?
Diehard football fans shudder to think of it. Television executives are scrambling to develop contingency plans. College football players are holding their breath in agony. Could the 2011-2012 NFL football season come and go without a single game being played? With 162 days remaining until Thursday night, September 8, the first game of the regular season is looking more and more in jeopardy with each passing day. During negotiations in late February
02-11-2011 | Politics, Law & Society
Goldfarb Branham
NFL Targeted in Lawsuit Over “Phantom” Super Bowl Seats
DALLAS – Two Green Bay Packers fans who were denied their dream of attending Sunday’s Super Bowl game even though they paid for tickets have filed a lawsuit in Dallas against the National Football League, The Dallas Cowboys, and Cowboys Stadium. Dallas-based law firm Goldfarb Branham filed the suit on behalf of two Wisconsin residents who were sold tickets to seats that did not exist – “phantom” seats – sold by
11-26-2010 | Sports
Thomson Sport
Thomson Sport Teams Up With NFL
Thomson Sport has signed a three-year sponsorship agreement to become Official Travel Partner of the NFL in the UK. As well as offering official NFL travel packages to European fans, commencing with Super Bowl XLV in North Texas on 6 February 2011, Thomson Sport will have comprehensive sponsorship rights relating to the NFL’s marks and key events such as the International Series at Wembley and the Super Bowl. In addition,
05-06-2008 | Associations & Organizations
The NeoSoul Trading Company
NFL VETERAN DRAWS UP NEW PLAY FOR DURHAM’S YOUTH
DURHAM, NC – National Football League Veteran Alvis Whitted has teamed up with The NeoSoul Trading Company to host a story time for children in Durham’s historic Northgate Mall. A Durham native and graduate of North Carolina State University, Whitted believes starting with his own community is the right thing to do. “I grew up in Durham just down the street from Northgate Mall,” Whitted said. “I recognize the challenges this
Comments about openPR
OpenPR is clearly structured and remains true to its principle of confining itself to the essential parts. OpenPR has proven to be a very good and reliable partner to our media agency: Within the shortest time the releases are online and go down well with the media representatives. The success of OpenPR is reflected in the steadily increasing number of press releases. It is good that OpenPR exists!
Ursula Koslik, Director Marketing & PR, F+W Hamburg