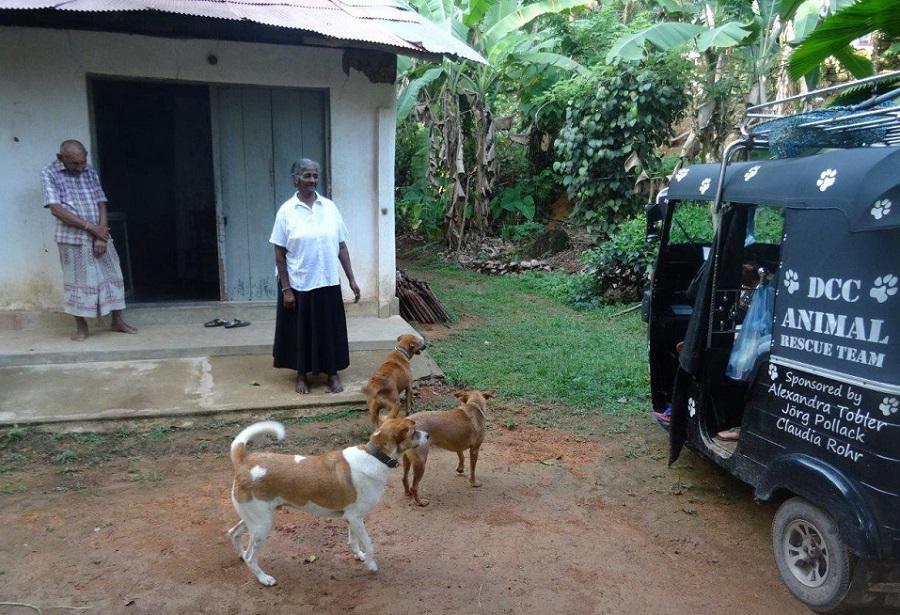 Animal welfare organisation Dog Care Clinic e.V. looks to find loving homes with poor elderly people for former street dogs. Through the „DCC 50+“ adoption scheme the retirees receive a monthly pension for taking care of the dog. This means there is a mutual benefit for each party involved, the DCC, the foster family as well as the dog, and up until today 135 dogs are being taken care of through the programme. However, costs are staggering and the future of programme is at stake.

Almost daily puppies get dumped in front of the gates of the Dog Care Clinic in Sri Lanka. The organization nurses them up and finds homes with local families. Unfortunately there are more puppies than takers and especially the brown dogs, females or those with disabilities tend to be left over and remain in the clinic. So the question is pressing – what to do with those unwanted dogs?

In September 2014 founder and director of the clinic, Marina Möbius, had a ground-breaking idea how to bring together animal welfare and the help for older people in need in a sustainable and mutually beneficial way: „Sri Lanka has no proper pension scheme and especially in the rural areas retirees heavily rely on support from their families. We give dogs to those who have no or a very low income and pay them a monthly pension of 35 US Dollars per dog. Like this we enable the foster seniors to care for their new furry friends.“

The DCC 50+ - a big success with staggering costs

Word of the DCC 50+ progam spread quickly in the area and the waiting list is ever growing. All those interested are visited at home before a decision is made whether or not their place fulfills the requirements. Even after a family has taken in a dog the Dog Care Clinic continues to look after it . All DCC 50+ dogs are visited monthly and living conditions are checked thoroughly.
Through the DCC 50+ the local people understand the value of a dog as a man’s best friend and unlike many others in Sri Lanka treat them as family member. „Every dog in the DCC 50+ program is not only a pension provider but an ambassador for the connection between humans and animals“, explains Marina Möbius.

Up to date 135 dogs are regularly visited through the DCC 50+ scheme. Their medical care is provided by the clinic free of charge. Every dog in the programme, however, costs the clinic about 70 USD per month. Funding these costs long-term is the biggest challenge the clinic is facing. As yet, Marina Möbius covers over 80 per cent of the needed funds out of her own pocket. The remaining just under 20 per cent are made up by donations.
The elderly‘s livelihoods are secured on a long-term basis

In 2015 the national average income in Sri Lanka was 300 USD per month. In rural areas it is a lot lower. For the elderly participants the DCC 50+ program is a true blessing. With 35 to 105 Dollars per month, not only the dogs are well taken care of but the foster families receive a substantial additional income: „We are very happy for the support we receive“ a member of the program tells. The 78 year-old, widely known as Lottery Uncle, used to sell lottery tickets with his bicycle. Now he is too old to continue his job and his wife has no income either. They both take care of their grown-up son who is severly disabled after a bomb blast during the civil war. Lottery Uncle took in three dogs of the DCC and has become a true animal lover: „I love my dogs. It is great to have such loyal company.“

The Dog Care Clinic is open for interested visitors on all 365 days of the year. Sri Lankan member of Parliament, Chandima Weerakody, as well as former German Ambassador Dr. Jürgen Morhard and current Ambassador Jörn Rohde visited the clinic, too: „The German Embassy will give its utmost support for this inspiring project.“

Dog Care Clinic was founded by German entrepreneur Marina Möbius in the south of Sri Lanka in 2007. During a vacation earlier she was confronted with the miserable situation of street dogs: „I had only two options. Either I never return to this county or I do something about it. I chose the latter and have been fighting for Sri Lanka's dogs ever since.“ The Dog Care Clinic is open on all 365 days of the year and employs 45 local staff.

Aims of the clinic:
- consistent neutering programs to reduce the number of stray dogs
- mass vaccinations to reduce diseases and to minimise the risk of rabies to both humans and animals
- treatment and care of injured and sick animals
- increase the understanding between dogs and humans
- help Sri Lankans by our sustainable social projects