nGize.FSP represented by one of the best German Fifa player 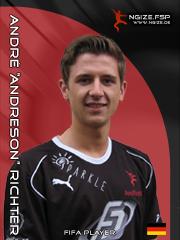 nGize.FSP, European top eSport club, proudly announces that their famous Fifa 09 player André „AndResoN“ Richter was invited to the „Zocken Deluxe“ (Playing Deluxe) event by Electronic Arts (EA) in Cologne, Germany.The public Fifa 09 tournament will take place on 14.03.09 in EA’s facility right by the beautiful Rhein, the largest river in Europe. Among casual and fun gamers who were able to sign up online, EA also invited 8 professional Fifa gamers from Germany. One of these is also nGize.FSP’s star player André.André does not only represent the nGize.FSP as a successful individual player, when finishing 2nd at the European Championship 2008 in Vienna or 1st at the ESL Sports Pre-Season group stage, but he also takes responsibility for the whole Fifa team as the team captain. André has been able to develop as a role model for many professional Fifa players and therefore embodies nGize.FSP and its sponsors FSP Group, SPARKLE Computer and PUMA allesraubkatze in the best possible way."On Saturday I will be in Cologne again, to represent nGize.FSP at a brand new event from EA. There will be prizes worth more then 1500€ to be won. Of course, I feel honored to be one of eight pro gamers chosen to be part of the Fifa 09 offline tournament and I will give my best to win it", says André Richter.Besides the Fifa 09 tournament, André will also promote nGize.FSP at a Nintendo Wii Fifa tournament, where he can also show his skills at the console. Together with players all across Germany André will celebrate a great eSports festival.nGize.FSP would like to invite everyone to their website – www.ngize.de - where you can not only see match results, but learn more about tournaments, read the players personal blogs, take a look at the teams, read daily videogame news and share your thoughts with the community.nGize eSports, founded on 01.02.2006, is a prestigious club in the area of professional computer gaming (electronic sports, eSport). The name "nGize" is derived from the English verb "to energize" and stands for its energetic and steady in eSports. From the headquarters in Herne, Germany, the club coordinates its worldwide success.The national and international successes boosted the club's reputation beyond Germany's borders and the brand of nGize eSports is known by a majority of the 22 million worldwide eSportler in the world. The past year 2008 was the most successful year since its founding. In international competitions like the World Cyber Games in Germany, the eSports World Cup in the United States or the Dreamhack in Sweden, nGize eSports was able to place its professional players on podium places.nGize eSports is a valued partner for companies. For this reason, global companies are joining the club, which increases their visibility and brand awareness. nGize eSports sees itself as a professional and market focused partner, where athletic success and unique marketing strategies are important for effective synergy effects. (www.ngize.de)Our partners: FSP Group – International successful power supply manufacturer – http://www.fsplifestyle.com SPARKLE Computer – Trusted and awarded graphic card manufacturer – http://www.sparkle.com.tw PUMA allesraubkatze – PUMA Shop – www.allesraubkatze.de ATOMIK – Internetcafé and eSport Bootcamp in Duesseldorf – www.atomik.infoAlexander Leonard Ronge nGize.FSP – PR Department Gysenbergstr. 77b 44627 Herne eMail: a.ronge@ngize.de

You can edit or delete your press release nGize.FSP represented by one of the best German Fifa player here

04-20-2009 | Leisure, Entertainment, Miscel …
nGize.FSP
FSP Group leads nGize.FSP Warcraft 3 to the top
Behind every successful project, there are interesting stories about the people that made this success possible. In a fast developing and growing business sector like the eSport market it is important to have a long-term strategy, focus on the community and constantly increase the teams performance. Within the last weeks, nGize.FSP - the international top eSports club - could perform a great start into the current season of the NGL ONE
03-14-2009 | Leisure, Entertainment, Miscel …
nGize.FSP
nGize WC3 defeats MYM in a glorious match
After having a very good start in the current WC3L season, it was time for one of the most anticipated matches of the Warcraft 3-scene: The match between the ambitious team nGize.FSP and the so called “King-of-the-Hill” MeetYourMakers. The speculations and discussions started days ago. The audience was not disappointed when nGize.FSP entered the match with South Koreas top player Hyeong Ju 'Check' Lee and Spain’s Pedro Moreno 'LucifroN' Durán.
03-11-2009 | Leisure, Entertainment, Miscel …
nGize.FSP
nGize.FSP Warcraft III Player Stays 2nd place worldwide and voted MVP
The international top eSport-Club nGize.FSP, is proud to announce that it is being represented by the second best Warcraft III player worldwide. After the update of the worldwide ranking, Pedro Moreno ‘LucifroN’ Durán from Spain managed to stay at his 2nd place for two months in a row. “It's always a good feeling when you see that your players are having success, because you get something back from all the
03-04-2009 | Leisure, Entertainment, Miscel …
nGize.FSP
nGize.FSP announces cooperation with fit4gaming
Together with its sponsors FSP Group, SPARKLE Computer and PUMA allesraubkatze.de, nGize.FSP will help the community website fit4gaming - with over 20.000 members - to gather new users and provide existing members with more activities. With this step nGize.FSP will also try to work closer with fun gamers, who will even be able to chat with famous nGize.FSP players or be able to watch exclusive show matches between star players.