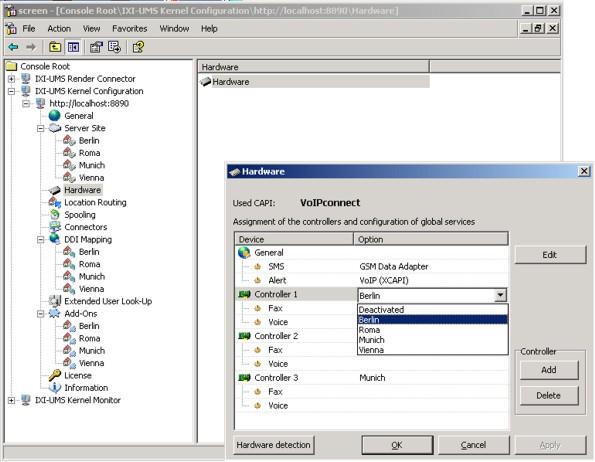 Olching, 11th February 2009: At Microsoft’s partner booth at CeBIT 2009 in Hanover, Germany, serVonic introduces the new version 5.8 of its unified messaging solution IXI-UMS: At Microsoft & Partners in Hall 4 Booth A26, the technological innovations and the Unified Communication strategy of the Olching-based software manufacturer are in the focus. The new IXI-UMS Kernel from serVonic supports Windows Server 2008. In the fields of Computer Telephony Integration, an OCS Gateway for the CTI-integration in Microsoft Office Communication Server is presented. IXI-UMS Version 5.8 With the new IXI-UMS Version 5.8, serVonic introduces a unified messaging solution at CeBIT, which is particularly suitable for companies with heterogeneous PBX- and IT-constellations. The new Kernel offers a better performance and a higher throughput for companies with a high volume of UMS messages. An improved site administration facilitates the operation of the UMS-solution in heterogeneous environments and migration phases, no matter whether ISDN or IP is used for the communication. Multiple sites and controllers from different sites can be defined and administered at one Kernel. That way, heterogeneous connections (S0, S2M, and VoIP) to PBX’s of various types can be combined and served with IXI-UMS. The administration and the handling of the messages are realized consistently with the IXI-UMS Kernel. The specific controller settings can be handled separately. The new version distinguishes by its powerful message routing, which e.g. can be extended by IXI-UMS MDS for an effective messages distribution. IXI-UMS 5.8 supports Windows Server 2008 and will be available at serVonic and sales partners from April 2009. Gateway for OCS The operation of Microsoft OCS (Office Communications Server) and the use of the Microsoft Office Communicator as CTI (Computer Telephony Integration) Client require a PBX with CTI Interface uaCSTA. Other PBX’s require a gateway that establishes the communication between PBX, Microsoft OCS and CTI-functionality of the Office Communicator: With the OCS Gateway, serVonic takes care of the communication between Microsoft OCS on the one hand, which supports the protocol uaCSTA, and VoIP-, hybrid- and conventional PBX’s on the other hand, which normally use the protocol CSTA or TSP. Via serVonic’s gateway, the control of the telephones that are connected to the PBX is possible with the Microsoft Office Communicator. The server-based call control gateway is suitable for the operation in homogeneous and heterogeneous PBX-environments and for almost any common PBX. Various Scenarios for Deploying serVonic UC in the Fields of PBX and IT At CeBIT 2009, serVonic emphasizes its Unified Communication strategy: Especially in times of change of PBX- and IT-environments in companies, serVonic’s UC solutions can be deployed for a multitude of possible PBX- and IT-constellations due to its orientation towards common standards. The current product- and partner-certifications also prove this: Unified messaging on virtual server like VMware or Hyper-V is available with IXI-UMS – beside the variant via VoIP-connection – now also for ISDN: serVonic certified Funkwerk Enterprise Communications as Technology Partner. The interaction of serVonic’s UMS-solution with Funkwerk bintec Routers as communication hardware has been tested successfully for ISDN and virtualization. serVonic received the SAP-certification “Integration with SAP NetWeaver“ in the category fax-systems for its IXI-UMS Connector for use with SAP® R/3®. In the context of the Siemens HiPath Ready program, Siemens certified serVonic for the PBX HiPath 8000. The successful operation of IXI-UMS with Microsoft Unified Messaging, Dialogic MediaGateways, AudioCodes Gateways and the connection to OpenSource Asterisk PBX-environments confirm the various scenarios for deploying serVonic’s software. Unified Communication Strategy at serVonic: Ready for Hosting and Fax as a Service (FaaS) serVonic has prepared its own UC products for the topic Outsourcing and Software as a Service: serVonic offers a hosting model for the integration of the IXI-UMS fax feature in provider-concepts with hosted mailboxes. True to the motto FaaS (Fax as a Service), serVonic introduces the new concept for Fax as a Service: serVonic takes care of the sending and the reception of faxes for customers, who want to run and administer their messaging system themselves. The user administration including potentially critical data and administration of the permissions can be handled by the customers themselves and does not have to be outsourced. serVonic’s FaaS concept thereby offers seamless integration of the fax solution into the messaging architecture and delivery of the faxes directly in the inbox of the users anyway. serVonic, headquartered in Olching near Munich, Germany, is a leading manufacturer of software solutions with focus on unified communication with unified messaging and CTI. The products of serVonic support existing standards like standard interfaces and standard hardware; proprietary solutions are avoided. The company strives to provide its customers with future-oriented product development, with a focus on integration in available environments. serVonic is partner of Dialogic, Funkwerk EC, IBM, innovaphone, Microsoft, Siemens, SAP and TE-Systems. Manufacturer / Contact for Readers’ Inquiries: serVonic GmbH Ilzweg 7 D-82140 Olching GERMANY Phone: +49 8142 4799-0 Fax: +49 8142 4799-40 E-mail: servonic@servonic.com http://www.servonic.com Press Contact: serVonic GmbH Ilzweg 7 D-82140 Olching GERMANY Mrs. Angelika Huber Phone: +49 8142 4799-12 Fax: +49 8142 4799-42 E-mail: a.huber@servonic.com http://www.servonic.com

You can edit or delete your press release CeBIT 2009: serVonic Unified Communication with new IXI-UMS Kernel and CTI Gateway for OCS here

03-02-2016 | IT, New Media & Software
serVonic GmbH
estos and serVonic grow together
The Unified Communications and CTI Software Developer estos acquires the Unified Messaging Specialist serVonic Starnberg/Olching, Germany, February 29, 2016: To simplify the communication in companies with innovative software – That’s the common mission of estos and serVonic with immediate effect. Both companies combine their forces under the roof of estos GmbH: estos has acquired serVonic GmbH, located in Olching near Munich, Germany, effective from January 1, 2016. In doing so, the
12-12-2014 | IT, New Media & Software
serVonic GmbH
IXI-PCS Certified for bintec elmeg hybird - serVonic’s CTI-Software Successful …
IXI-PCS has been certified for the connection to bintec elmeg hybird 120/130 and 300/600. serVonic has tested its CTI-server extensively and successfully. “Our professional call server IXI-PCS is based on the TAPI-standard,” explains Jochen Klein, CEO at serVonic. “We tested features like initiating calls, call transfer or disconnect, for example, as well as hotkey dialing, caller identification and search options.” Jochen Bräunlein, Director Distribution D/A/CH at bintec elmeg, adds: “We
04-23-2014 | IT, New Media & Software
serVonic GmbH
Fax, Voice and Mobile now Available with More Comfort - serVonic: New IXI-UMS Ve …
serVonic released the new version of its unified messaging server solution: IXI-UMS 6.10 offers more comfort for the users as well as highly flexible user administration: Additional features for the service Fax improve the options for routing and printing, the archiving and the traceability of the delivery date. In the fields of Voice and Mobile, serVonic extended the TUI, which means Telephone User Interface. The newly implemented support of the
02-26-2014 | IT, New Media & Software
serVonic GmbH
serVonic Web Service: Fax, Voice, SMS and TTS - IXI-UMS Unified Messaging SOAP C …
serVonic now enables a unified messaging web service: The new IXI-UMS SOAP Connector connects SOAP-capable applications with the UM-features for Fax, Voice, SMS and TTS. UM-messages so can be sent in an automated way out of applications such as ERP-systems as well as online shops or database-supported applications like CRM or customer information systems. The reports about the successful delivery are provided SOAP-compatible: They can be analyzed by the respective