CSA Celebrity Speakers Presents a Challenge for the Future 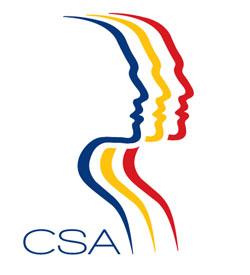 February 12th, 2008: On February 4th, 2008, CSA Celebrity Speakers held its inaugural Forum at London’s BAFTA entitled ‘What’s Next? … Challenging The Future’, a unique panel debate in front of an invited audience of business professionals drawn from all areas of industry and commerce. The evening delivered an entertaining and thought-provoking debate from five popular conference speakers, including: Lord Stern of Brentford whose career includes high profile economist and advisor roles to both the World Bank and the Blair Government and Rachel Lomax, former Deputy Governor of the Bank of England. To bring entirely different perspectives there were lawyer-turned-entrepreneur founder of Coffee Republic, Sahar Hashemi; ex-Ambassador in Washington and now head of the Press Complaints Commission, Sir Christopher Meyer and the inimitable Ruby Wax who has taken her MSc in psychotherapy into the boardroom, delivering workshops on corporate leadership. James Bellini moderated the panel and brought insightful thought and great perspicacity to the event. Lord Nicholas Stern warned of the sheer magnitude of the risks we face if we continue the way we are: “Business as usual will take us some time at the end of this century to a position where hundreds of millions, probably billions of people will be on the move: - and that will cause massive global conflict.” However, Lord Stern later added that “We have the opportunity to lay the foundations for the future – low carbon growth is the way forward.” As the debate progressed Rachel Lomax strongly defended the work of the Monetary Policy Committee on which she contributed an influential steer for five years. Acknowledging the failures of recent months, she remarked: “Something has gone wrong with the way our financial system works. We’ve got to learn how to run a good financial banking system safely and soundly and that’s the big question at the moment." Rachel went on “This is having a very big effect on people’s lives and people’s jobs and we haven’t seen the end of it yet.” And Ruby Wax made an almost philosophical contribution saying “The growth of our brain is about a teaspoon every 100,000 years, and we can use it to regulate our mind and understand, and deal with, the global disease by communicating and collaborating better”. Meanwhile Sahar Hashemi commented: “We have to think of new ways of doing things; you’re almost pushed over the edge in a recession, you become more creative and many successful brands we know now from Apple to Microsoft to Amazon to Google started in a recession.” The various backgrounds of the speakers shone through, highlighting climate change, monetary policy, entrepreneurialism, international affairs and personal development. The chemistry between the panel led to a fascinating evening that both entertained and informed and the questions from the audience reflected the tone of the evening; they were captivated by the positive feelings that came from the panel; that working together we can all make a difference and that it is people who created the current situation and it will certainly be people who will effect the changes necessary to move us on and out of it. For more information on this event and the six speakers, please contact: Barry Jones, Marketing Manager on +44 (0) 1628 601425 or email him on barry@speakers.co.ukCSA Celebrity Speakers Ltd is part of the global network of speaker bureaux CSA, with an established reputation of 25 years operating from 15 offices around the world. CSA Speakers is entrusted with the management of speakers’ services, who are among the world’s most outstanding personalities from the field of professional business, academia, politics, sport, entertainment and the art.Barry Jones +44 (0) 1628 601425 Email: barry@speakers.co.uk www.speakers.co.uk 90 High Street Burnham Buckinghamshire SL1 7JT United Kingdom

03-19-2009 | Business, Economy, Finances, B …
CSA-Celebrity Speakers Limited
The Honourable Sergio Marchi, P.C., MP joins the ranks of CSA Celebrity Speakers …
Burnham, UK: Sergio Marchi, having had an extensive career in both business and government, has gained a truly global understanding of both the world economy and politics. He is a former Canadian politician who has been a 3-time federal Cabinet minister, Ambassador of Canada to the World Trade Organization (WTO), the World Intellectual Property Organization (WIPO) and the Office of the United Nations, as well as being a UN
09-17-2008 | Energy & Environment
CSA-Celebrity Speakers Limited
Caprice joins the ranks of CSA Celebrity Speakers’ global speaker list
Burnham, UK, September 17th, 2008 Caprice Bourret became a household name around the world through her modelling and media appearances. Arriving in England from Southern California she became one of the most photographed women in the world, appearing on over 300 magazine covers. Subsequently she made numerous television appearances and went on to roles on the West End stage where she received rave reviews. Caprice then moved on to
07-31-2008 | Industry, Real Estate & Constr …
CSA-Celebrity Speakers Limited
Questioning the Extent of Global Warming
The Rt. Hon. Lord Lawson of Blaby launches hard-hitting new book Burnham, UK, July 31st, 2008: Lord Lawson, former Chancellor of the Exchequer and Secretary of State for Energy, has recently completed his latest book – An Appeal to Reason: A Cool Look at Global Warming, where he concludes that global warming is not the devastating threat to the planet it is widely supposed to be. Whilst Lord Lawson does not question
03-27-2008 | Business, Economy, Finances, B …
CSA-Celebrity Speakers Limited
Recognizing the Importance of Virtual Leadership
Mark Fritz to teach at IFL – Stockholm School of Economics Burnham, UK, March 26, 2008: Mark Fritz, an authority on Virtual Leadership, has been acknowledged for his expertise and will be teaching at the prestigious IFL – Stockholm School of Economics starting in April, 2008. His classes will include Virtual Leadership and Living & Working Internationally, topics which are currently in great demand. The Stockholm School of Economics is a