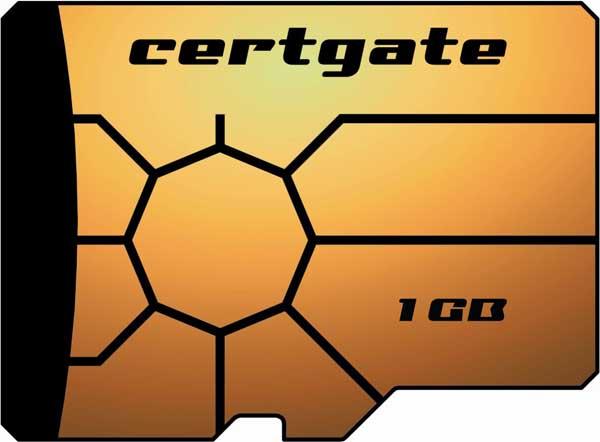 Premiere at the GSMA Mobile World in Barcelona: certgate's Smart Card microSD, a hardware-based solution to protect sensitive data, is now available for BlackBerry devices. Nuremberg/Barcelona, 10 February 2009: With its unique hardware token, certgate GmbH offers an ergonomic solution to enhance data safety on BlackBerry devices used in sensitive environments - a solution by far superior to software-based ones. In 2007, the young Nuremberg-based provider of IT security solutions had launched the first microSD card worldwide featuring both, a cryptographic processor and the entire functionality and security of a Smart Card. Now the card is also suitable for use in the BlackBerry's memory card slot, so it is no longer necessary to connect to external devices for authentication or encryption. The Canadian-based manufacturer of the BlackBerry, RIM, has been offering another solution for email data protection: A reading device is available as accessory, enabling users to encrypt stored and/or sent data by means of personal certificates. According to IT security experts, this technology prevents access to sensitive data by unauthorized persons and, provided a conclusive internal security policy is in place, thus enables mobile devices to be used in security-sensitive environments such as government authorities or high-tech enterprises. Still, the question is: Who wants to carry around an extra reading device and a check-card-sized Smart Card in addition to their smartphones? Then there are software-based encryption solutions, based on using the boot-up logic to store certificates and encryption materials on the device. The problem with these solutions is that they are too vulnerable to be used for business purposes. "No wonder there is widespread skepticism in security-sensitive business fields when it comes to using mobile devices," says Dr. Paschalis Papagrigoriou, CEO of certgate GmbH, "but our new hardware-based security solution, which now is also available for BlackBerry, closes previous safety gaps. What's more, it is easy and comfortable to use." Papagrigoriou goes on to explain the advantages of the new solution: "Since our certgate Smart Card microSD does not require any external readers or other devices, with codes generated directly on the chip card, it is virtually impossible to spy them. Even if the device is lost or stolen the data is safe thanks to powerful and effective encryption." With more than 11 million users worldwide, the BlackBerry can be considered the most popular and widely used mobile communication device. Without it, modern business life would be almost unthinkable, in particular for managers. However, when the French government in 2007 banned business-related use of the BlackBerry by government officials due to security concerns, this reignited public debate around the safety of sensitive data on mobile devices. In Germany, the Federal Office for Information Security (BSI) has been cautioning against using the BlackBerry "in security sensitive areas of public administration and in businesses threatened by industrial espionage". And major corporations like Audi or Total have long been prohibiting the use of BlackBerry devices within their IT functions due to security concerns. The certgate Smart Card microSD is available not only for BlackBerry: A version for devices running on Microsoft operating systems has been established in the market for quite some time, and is used by renowned organizations in Germany and other countries to ensure safe data communications with mobile devices. The Cards are available with either 512 MB or 1 GB flash memory. About certgate GmbH: certgate GmbH is a Nuremberg-based high-tech enterprise which was founded by Dr. Paschalis Papgrigoriou in 2004. The innovative company specializes in developing and marketing products and solutions which enhance the safety and user-friendliness of mobile communication devices. certgate has developed the first microSD card worldwide featuring Smart Card functionality, and has obtained patent protection for its technical lead in the field of mobile IT security. Due to its strong cryptographic function, the certgate microSD Smart Card permits the generation, storage and safe use of certificates and personal safety keys. Consequently, it also supports encrypted data storage, safe mobile banking according to HBCI and EBICS standards, and the setting up of safe VPN connections from mobile devices. In close cooperation with implementation partners, certgate is also working on customized security solutions for smartphones, PDAs and other mobile devices, based on its certgate Smart Card micro SD. www.certgate.de Press contact certgate certgate GmbH Dr. Paschalis Papagrigoriou Rollnerstraße 142 90408 Nürnberg Tel.: +49.911.93 52 3-0 Fax: +49.911.93 52 3-52 press@certgate.biz Sabine Faltmann f@ltmann PR +49.241.8946822 certgate@faltmann-pr.de