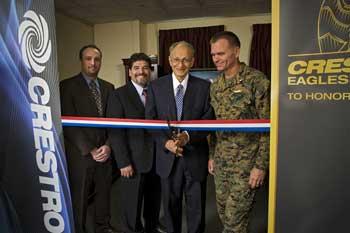 Crestron Eagles Program Honors Heroes; Dedication Ceremony Officially Opens New Home Theater at Camp Lejeune for Wounded Warriors Battalion - East CAMP LEJEUNE, NC, February 9, 2009 — Crestron hosted the second Eagles Program dedication ceremony yesterday for the Wounded Warriors Battalion – East at Camp Lejeune, NC, unveiling the new home theater donated to provide comfort and entertainment for America’s heroes recovering from injuries sustained during combat overseas. The Crestron Eagles Program was conceived by Crestron President George Feldstein to honor the service and sacrifice of our wounded warriors returning home from battle. Camp Lejeune is an expansive base near Jacksonville, NC. Marines train in every aspect of combat – including land, sea and air – from this facility. It is home to Wound Warriors Battalion –East, which is comprised of 130 marines in various stages of recovery from severe brain injuries, amputations and traumatic stress disorders. “You all think that we’ve done something special for you,” explained Mr. Feldstein, speaking to a group of Marines recovering at the base. “But this is really nothing compared to everything that you’ve done for us. This is the least we could do. I thank you for the opportunity to give something back to you to show our appreciation for your service and sacrifice.” There was no shortage of admiration at the dedication ceremony, which was attended by nearly 100 wounded warriors. The event started with a prayer of thanks and dedication led by Chaplain Tim Williams, who blessed all who contributed time, effort and equipment to make this donation possible. Captain Raymond Baronie, Alpha Company Commander and a double amputee himself, offered his gratitude to Crestron and Mr. Feldstein for creating the Eagles Program, and demonstrating leadership through altruism. “This is our home, and you’ve made it a lot more comfortable. We truly appreciate your support and generosity.” Captain Baronie presented the coveted Wounded Warrior Battalion – East coin to Mr. Feldstein, who accepted the honor with humility. “The coin has been given to only a select handful of generals,” continued Baronie. “Even the President of the United States doesn’t have one.” Lt. Colonel Tom Siebenthal, Battalion Commander, then gave heartfelt thanks to AVI/SPL for installing the system, ICD for programming the system, and the other vendors for their contributions: Marshall Furniture (custom cabinet), Triad (speakers and stands), Velodyne (sub-woofer) and LG Electronics (Blu-ray player). Crestron donated an Adagio® home theater system, CEN-IDOC interface for iPod®, TPMC-8X Isys i/O™ WiFi touchpanel and a 52-inch HD plasma. Lt. Col. Siebenthal presented each donor with a personalized plaque recognizing their support and dedication to the Marines. “You didn’t have to do anything. But what you did was above and beyond. We are grateful to you for thinking of us, caring about us and all that you’ve done for us.” Mr. Feldstein presented Lt. Colonel Siebenthal with the Crestron Eagles Program plaque in honor of our heroes. “If you notice the eagle on this emblem is facing to its left,” Feldstein points out. “On all other emblems the eagle faces to the right, which symbolizes power and strength. This eagle symbolizes compassion. Each one of us has responsibility to give back to our service men and women who courageously have made the ultimate sacrifice for our freedom, democracy and way of life. This country is a land of opportunity, but that opportunity comes with a price – which you all have paid on our behalf.” After plaques and acknowledgements were graciously received, the official ribbon cutting was performed by HM3 (FMF) Dustin E. Kirby, a Navy Corpsman assigned to the battalion. Kirby received the Navy Cross when he was severely wounded in combat and performed a tracheotomy on himself in the field, then refused a stretcher and walked defiantly to the helicopter. His story of valor and courage is just one of many. Each of the Marines in the battalion has served and sacrificed. Everyone that participated in this project was impressed and forever changed by these heroes. The next hospitals scheduled to receive a home theater are Bethesda Naval Hospital and Wounded Warriors Battalion - West. "We have been overwhelmed by the response we’ve received from our industry. Installers and programmers call and email every day asking us if they can do the next one," said Mr. Feldstein. “These first two installations [Walter Reed and Camp Lejeune] are just the beginning. This needs to be an ongoing program.” For more information about the Crestron Eagle Program contact Pete Baca at pbaca@crestron.com. For additional high-resolution photos of the Crestron Eagles Program dedication ceremony at Camp Lejeune go to www.crestron.com/pressroom and select “High Res Photos and Logos” and then “Current Press Photos.” About Crestron For nearly 40 years Crestron has been the world's leading manufacturer of advanced control and automation systems, innovating technology to simplify and enhance modern lifestyles and businesses. Offering integrated solutions to control audio, video, computer, and environmental systems, Crestron streamlines technology, improving quality of life in commercial buildings, universities, hotels, hospitals and homes. In addition to its World Headquarters in Rockleigh, New Jersey, Crestron has sales and support offices throughout the U.S., Canada, Europe, Middle East, Asia, Latin America and Australia. # # # 15 Volvo Dr. Rockleigh, NJ 07647

05-11-2020 | Advertising, Media Consulting, …
GroupApp
GroupApp Annouces Beta Program
Walnut, CA: GroupApp today announced the launch of GroupApp's beta program. GroupApp is an all-in-one community platform for businesses and creators who are looking to build an online community for their customers or audience. They have been called the Slack for online community software. Features and benefits of the GroupApp: Create an online community on GroupApp in minutes, invite your audience, start discussions, ask questions, share content, and let customers connect with
02-20-2018 | Fashion, Lifestyle, Trends
About WOW OVERSEAS PRIVATE LIMITED
Affiliate Program
PUNE, MAHARASHTRA (February 14, 2018) – Every woman has a great passion for the jewelry as it is the essential part of life now, while surfing on social network we found one more affiliate program that is Ornate Jewels Affiliate Program, were they are pretending to be one of the Highest Paying Commission Affiliate program with unique features to increase affiliate commissions on each product sales as well as we
08-22-2017 | Fashion, Lifestyle, Trends
Advantage Products Corp. (TREDS Rubber Footwear)
TREDS Free Sampling Program
Distributor Customers! Did you know that you can get a free sample for any medium to large size company that isn’t currently using TREDS? This is what we know-Once a customer gets a chance to try TREDS on the jobsite, they understand the value! Typically, this is a fool proof way to bring on a new LOYAL TREDS customer! Here is the link to the sampling program: https://drive.google.com/file/d/0B820uEerlMGXYlRzM3R1Sk5Ba28/view?usp=sharing All you need to do is print off
02-08-2013 | Science & Education
Indian Institute of Patent and Trademark Attorney
Patent Drafting Program
PATENT DRAFTING PROGRAM AT IIPTA By Rachana February 06, 2013 Delhi, Indian Institute of Patent and Trademark Attorney announces the introduction of Patent Drafting Program as one among the many Intellectual Property related programs offered by the company. This program is focussed mainly on providing an in-depth understanding and writing of patent language in an advanced level.
10-05-2011 | IT, New Media & Software
Gamesrocket GmbH
Gamesrocket’s new affiliate program
Gamesrocket is a licensed partner of games publishers such as Electronic Arts, Ubisoft and THQ and runs an online shop for computer games downloads. The essential part of the product assortment is the huge offering of PC / Mac games from various genres. Additionally, mini games and free-to-play browser games are offered. Gamesrocket has now launched its lucrative affiliate program. From now on, advertisers can promote Gamesrocket and easily earn
08-17-2011 | Business, Economy, Finances, B …
Los Angeles County Business
LosAngelesCountyBusiness.com Offers New Program
Networking Service for Small Business Owners. Los Angeles, CA, August 13, 2011 — LosAngelesCountyBusiness.com (powered by SmartGuy.com) today announced a new FREE program to assist and connect thousands of local businesses in a single massive referral network. Within just 1-2 minutes, businesses can enter their information and be listed in the Los Angeles County Business directory, included in the businesses-to-business referral network, and provided an online web page that can rank on
Comments about openPR
I can't but agree to the positive statements about your portal: easy to use, clear layout, very good search function, and quick editing!
Jens O'Brien, Borgmeier Media Communication