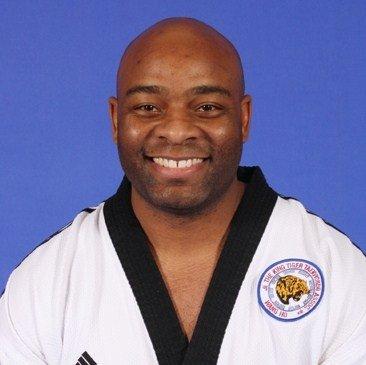 Master Terrance Evins of King Tiger Tae Kwon Do North Charlotte was one of the featured conference speakers for the 2nd Young Black Males Leadership Conference (YBM) on Saturday, February 7th. The event was held at the Mallard Creek High School in Charlotte, North Carolina.The YBM Leadership Conference is part of a comprehensive program designed to create a new reality by developing leadership skills in young black men between the ages of 14 and 18. In this new reality, young black men are educated, motivated, inspired and are seen as true leaders of our global community.“I was proud to be able to participate,” Evins remarked. “As an African-American man and a business owner, I feel it is important to share my experiences with other young men. They need to know they too can make it in this world. Also I had to be honest. Alerting them that any amount of success takes hard work but it’s worth it in the end.” About Master Terrance Evins: Starting at age 6, Evins has taken the martial arts by storm. He is a former collegiate, state and national champion in forms and sparring. Additional accolades include State Director for the Philippine Martial Arts Alliance, Amerinational Service Hall of Fame Speaker Award and Action Martial Arts Hall of Fame Inductee for Excellence in Teaching in 2007. In 2007, Evins became the first African-American to successfully complete the coveted Ultimate Black Belt Challenge. Winter 2008, Evins was the 2008 General Mills Community Champion Award recipient, named Who’s Who in Black Charlotte in entrepreneurs and inducted as a member of the Martial Arts Hall of Honors.About King Tiger Tae Kwon Do: Opening in 2003 in Charlotte, King Tiger Tae Kwon Do (KT) of North Charlotte’s goal for each student is to provide practical self defense techniques, promote better health and develop strong minds. KT is determined to serve students with the highest quality instruction, professionalism, and service in the industry. With diverse student age ranges, KT offers discipline and character building programs available for children, men and women including Tae Kwon Do, After School and Summer Camps. King Tiger Tae Kwon Do has two locations, University City and Huntersville near Birkdale Village.Additional information about King Tiger Academy of North Charlotte can be found at http://www.kingtigertkdnorth.com/. To schedule an interview with Terrance Evins of King Tiger Tae Kwon Do, please contact John Burton, Jr. of The Burton Group PR.Media Contact: John Burton, Jr. the burton group pr 704.605.5153 – e theburtongrouppr@hotmail.com- eFounded in 2001, The Burton Group is a marketing, event development, and media relations agency. We offer a suite of innovative public relations, business promotion services, and their history of representing small enterprises, corporations and not-for-profit organizations over the past 8 years. Over the years, we have represented a range of clients including: recording artists, religious, non-profit organizations, entertainment celebrities, media publications and business corporations.John Burton, Jr. the burton group pr Charlotte, NC /Los Angeles, CA 704.605.5153 – e theburtongrouppr@hotmail.com- e

12-03-2019 | Associations & Organizations
Richmond World Affairs Council
The Richmond World Affairs Council Announces New Board Member, Penny Evins
(December 2, 2019 – Richmond, VA) The Richmond World Affairs Council is pleased to announce the appointment of a new member to its Board of Directors. Penny Evins, nominated by eminent members of the Richmond community, is Head of School at Collegiate School. As an accomplished leader in educational governance with extensive community involvement, Ms. Evins’s expertise and experience make her an exceptional asset to the World Affairs Council. A University
06-03-2008 | Sports
The Burton Group
King Tiger Tae Kwon Do of North Charlotte Announces Race Title Sponsorship
King Tiger Tae Kwon Do of North Charlotte, one of the Charlotte’s leading martial arts education academies announced its title sponsorship of the newly named King Tiger 5K Run/Walk in University City. The run/walk will take place on Saturday, June 7 at 7:30 AM. This partnership, with race organizer Run for Life involves naming rights as well as a variety of marketing, promotional and charitable components. “We’re thrilled to be involved
Comments about openPR
We publish our press releases on openPR.de because we like people who are "open" - just like us.
Frank Obels, CEO, INCONET - Informationssysteme, Communication und Netzwerkberatung GmbH