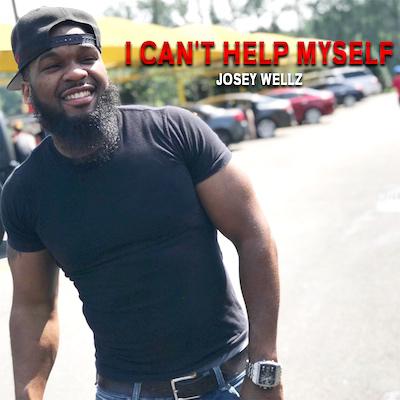 New York City recording artist Josey Wellz announced the release of his debut record titled "I Can't Help Myself". Six slick songs about love and life that fit snugly into the Top 40 radio category are included in the track list of "I Can't Help Myself" (released on the Josey Wellz Productions label). Josey is a versatile vocalist who is equally comfortable performing club bangers to dance to as he is to crooning slow jams for when it's time to get busy with the one you love.A North American radio and press campaign has been launched to promote "I Can't Help Myself". This freshman offering from Josey Wellz is anticipated to not only hit regional radio charts throughout the USA and Canada but to also appear as well on national radio airplay Mainstream Top 40 charts as it steadily climbs to the top of broadcaster's play lists. The single, which is also the title track from the "I Can't Help Myself" album, officially begins to impact mainstream radio rotation play lists the week of September 4th. Wellz, now residing in Atlanta, Georgia has just wrapped up shooting a music video for one of the songs from the album ("You Know"). The music video is still in the editing process but is slated to be released by the end of August. Before the end of this summer "I Can't Help Myself" and all the tracks contained there within will be available for purchase globally from major digital retailers online. Talk of a tour to support the record is in the planning stage and expected to take place later this year. Josey Wellz is currently available for interviews and/or appearances. His press kit will be provided upon request to all members of the media by contacting his representative listed below. News, updates and additional information may also be found at: https://www.facebook.com/joseywellz001/ Media Contact:Stevie B Mia Mind Music Phone: 800-843-8575 Email: press@miamindmusic.comWith 30 years of experience, Mia Mind Music is an entertainment promotion and marketing company for musicians and labels. Every success story begins with building a team and we are here to help you do just that. No account is too big or too small for us to handle.Stevie B - Mia Mind Music 254 6th Street, Suite #2 Hoboken, NJ 07030 USA

01-12-2021 | Leisure, Entertainment, Miscel …
Mia Mind Music
Darrell Kelley Commemorates Black History Event
Between the official certification of our new president and vice-president, and the runoff elections in Georgia providing a new party majority now in both the House and the Senate, it's been quite a week. Presidential Inauguration Day on January 20th this year will be a historic event and Georgia musician Darrell Kelley commemorates it with “Kamala” (Viral Records), his latest single about the first black woman to hold the office
06-26-2020 | Leisure, Entertainment, Miscel …
Mia Mind Music
Viral Records Announces New Darrell Kelley Album Release
Darrell Kelley's label, Viral Records, announced the release of his latest album, "The Audacity". It is currently being distributed globally by his record company to all major entertainment publications, news platforms, radio stations and digital retailers. As with many of Kelley's prior releases the artist utilizes his music as a contemporary commentary tool to bring attention to the plights and pitfalls that many of the less fortunate within our population
09-19-2017 | Arts & Culture
Mia Mind Music
"She" by Charity Ekeke An Indicator 2017 May Be The Next Year of the Woman
The January 2017 Women's March on Washington may have been an early indicator that this year may be a return to 1992's Year of the Woman. Now with the release of Charity Ekeke's album which is titled "She" that early indicator is looking less and less like a slim possibility and more and more like a potential reality. Women have a voice and as Ms. Ekeke embodies and demonstrates on
08-30-2017 | Leisure, Entertainment, Miscel …
Mia Mind Music
Romeo M Comes To America To Release Tracker Love
In search of a larger audience for his music Romeo M, originally from the Democratic Republic of Congo, has arrived in North America to stake his claim and go for that music business gold that so many other artists are striving for. He's a popular performer at festivals throughout South Africa whose style of music has been called Afro-World-Hip-Hop. Romeo M takes the art of keeping your eye on the