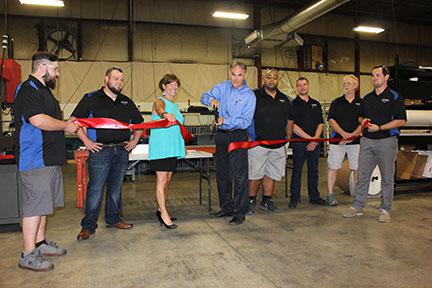 Ribbon Cutting Ceremony Officially Launches RAPID Turbo Cell Facility New Cell Facility Allows for Faster Turn Around on Sheet Metal PartsAugust 11, 2017 – Nashua NH – Rapid Sheet Metal, the largest prototype sheet metal manufacturer in the world, is excited to announce the official launch of its new turbo 5 day lead time service. The President of t¬he Nashua Chamber of Commerce – Tracey Hatch, Rapid Sheet Metal’s General Manager – David Puleo and a number of Turbo’s employees cut the ceremonial red ribbon today to officially open the new Turbo Cell facility located at 22 Charron Ave, Nashua NH. Turbo is a state of the art manufacturing 40 x 40 ft sheet metal cell that can produce parts that are within a predetermined criteria, in hours cutting lead times down to 5 days or sooner. Turbo is industry changing and is the latest addition to RAPID’s offerings. David Puleo stated during his ceremonial speech, “Many years ago, I had a vision of a manufacturing cell that could run sheet metal parts faster than the traditional shops. I had a vision of these cells being compact and flexible enough to be able to put them around the country. I had a vision of satisfying national customers faster than the industry standard. Today, I can say that one of my work dreams has come true. Today I would like to introduce you to Turbo!” Rapid Sheet Metal was founded in 2001 with a mission to manufacture quality prototype sheet metal parts in days, not weeks. All parts are quoted in less than 24 hours and typically delivered in less than 7 business days. The decrease to a 5 day turn for custom parts allows customers to launch projects even faster than before. “This is truly the beginning. We are already planning on expanding the capability of the cells. Creating interlocking cells. The vision is to take the cell and place it in a hot zone around the country or even around the world. Orders will filter into Nashua headquarters and then delegate to the appropriate cell. These cells will propel us into the future and bring us closer to our BHAG, which is to be the Amazon of Custom Parts.” states, David Puleo. For details on 5 day turn sheet metal parts, visit: https://rapidmanufacturing.com/rapid-sheet-metal/sheet-metal-fabrication-services/5-day-sheet-metal-parts/RAPID employs over 325 people focused on quick-turn prototype sheet meal and machined parts. Rapid Sheet Metal offers a FREE add-in, eRAPID, for SOLIDWORKS that allows users to cost and order sheet metal parts within CAD, instantly. eRAPID also provides design for manufacturability feedback as users design sheet metal parts. Rapid machining quotes machined and turned parts within 24 hours. RAPID ships all parts in days, not weeks. Other services include wire harnesses, cable assemblies and box builds. www.rapidmanufacturing.com15 Charron Ave, Nashua NH 03063