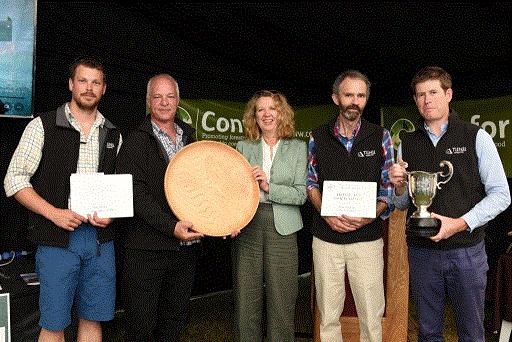 (Tilhill, Powys, August 2017) – Tilhill Forestry staff are delighted to have won 22 awards across different categories in the 2017 Woodlands Competition at the Royal Welsh Show.The awards, which received a record number of entries this year, saw woodlands managed by Tilhill Forestry winning six Special Prizes including the coveted ICF Challenge Trophy for the Best Professional Management in all Woodland Classes for Rhyd-y-Felin, near Bala, owned by FIM Services Ltd.The planting scheme at Clegymant Farm, near Llanbrynmair, won three Special Prizes including: The Milford Silver Medal awarded to the Best Broadleaf Entry in Stand Classes A, B and C; The DJ Owen Cash Prize awarded for the Best Farm Woodland (Managed as Part of an Agricultural Business) in Stand Class H and the RC Williams-Ellis Perpetual Challenge Cup for the privately owned woodland gaining the highest cumulative number of points for the Stand Classes entered.Cwmbran Uchaf, near Llandovery, was described as “demonstrating good management practices throughout” which helped win The EFG Perpetual Challenge Cup awarded for the Best Entry in Woodland Classes 1, 2, 3 and 4.The Wilson Memorial Shield was awarded to Tilhill Forestry’s Simon Graham as the Forester or Manager of a privately owned woodland in Wales gaining the highest cumulative number of points for the Stand Classes entered.David Edwards, District Manager, Wales & the Marches said: “We are very pleased with the success in this year’s awards. It’s great news for our staff including Iwan Parry, Simon Graham, Alan Wilson, Sam Brown and John Ferguson and the teams who work so hard at sites across Wales and also for our clients as the awards give third party endorsement of the services they are receiving.”Other awards won by Tilhill included: a Gold for Cwmbran Uchaf in the Broadleaved, Conifer and Mixed Wood or Stand of Trees Class 2 Best Managed Woodland 11 to 50 Hectares. Clegymant Farm was awarded the Silver medal in the same category.In the Best Managed Woodland 51 to 200 Hectares Gwern-y-Bwlch, near Llanbrynmair, won Gold with judges saying that “continuity of management is the key to success matched by good planning”. Silver in the category went to Esgair Cloddiad North, Powys, for excellent forest practice with the judges saying “Tilhill should be proud of their achievements”.In the Best Managed Woodland Over 200 Hectares Rhyd-y-Felin won the Gold award with the judges describing the property as “a fine example of commercial forestry at its very best”.In the Stand Classes Clegymant Farm won the Gold Medal in Class A (Broadleaf planting or restocking under 10 years old), while Cae Heulen, near Pant-Glas, won Class C (Broadleaf woodland over 40 years old) with Yr Allt, Llanfaelog, taking Silver. In Class D (Conifer planting or restocking under 10 years old) Tilhill Forestry scooped all three medals with the Gold being won by Esgair Cloddiad North, the Silver by Rhyd y Felin and the Bronze by Bryn Coch, Llanddewi Brefi.. In Class E (Conifer Woodland 11 to 30 years old) the Silver went to Cae Heulen. Tilhill won joint Bronze with Esgairnantau Forest. In Class H (Area managed in conjunction with Agriculture Management) Clergymant Farm won the Gold medal.Silver in this category also went to Tilhill Forestry for Dinas Forest near Llanwrtyd Wells. The judges said the “whole area had a feeling of being well managed and looked after with timber production being the major focus on this fertile site”.ENDSPhoto shows: From left to right: Sam Brown, John Ferguson, Simon Graham and Iwan Parry from Tilhill Forestry with Shireen Chambers of ICF in between.For further information contact Suzi Christie PR Consultant for Tilhill Forestry on 01323 449744 or e-mail suzi@blueberry-pr.co.ukTilhill Forestry, a wholly owned subsidiary of the BSW Timber Group, was established nearly 70 years ago. It is a national company operating from a network of offices throughout the UK. The company provides a full range of consultancy and contracting services to the forest owner and forestry investor. There is also a complementary soft landscaping operation. Further information is available at www.tilhill.comBSW is the most technologically advanced sawmill company in the UK employing over 1,200 people. The Company’s roots date back to 1848 and, with seven sawmills in the UK and one in Latvia, has a production capacity of more than 1.2 million m3 of sawn timber which is distributed throughout construction, fencing and landscape markets www.bsw.co.uk Together, BSW and Tilhill Forestry form a strong partnership in the forest industry that will deliver quality from beginning to end - from creating new forests through to producing timber end products.2, Dane Cross Hellingly Hailsham East Sussex BN27 4ES

11-04-2019 | Business, Economy, Finances, B …
Tilhill Forestry
Building a Solid Structure for Growth
(Tilhill Forestry, 31 October 2019) – Due to ambitious expansion plans in Scotland, Tilhill Forestry is pleased to announce the promotion to Regional Manager of two of its most experienced and respected professionals. Andrew Vaughan will move on from his role as District Manager of Central Scotland to take responsibility for a new North Scotland region encompassing the Central Scotland, West Highland and North Highland Districts. Eddie Addis will build on the
08-16-2019 | Business, Economy, Finances, B …
Tilhill Forestry
George McRobbie to step down as Managing Director of Tilhill Forestry
After seven years of service, George McRobbie has announced his intention to step down as Managing Director of Tilhill Forestry. George will therefore be leaving the business on his 65th Birthday which falls on 7th October. However, George is not announcing his retirement. He will continue as a Director within the BSW Group but will, in future, be based at Group Headquarters in Earlston instead of Tilhill’s Head Office in Stirling.
07-15-2019 | Business, Economy, Finances, B …
Tilhill Forestry
BSW Timber Group acquires Maelor Forest Nurseries Holdings Ltd
BSW Timber Limited has, of 12 July 2019, acquired Maelor Forest Nurseries Holdings Ltd. In addition to securing the future for the delivery of home-grown British trees to the UK forest industry, this exciting acquisition will enable Maelor Forest Nurseries Holdings Ltd to progress with their visionary expansion plans. These include the highly important and valuable scientific research work the nursery is renowned for undertaking. The foundations for this work have
09-24-2018 | Business, Economy, Finances, B …
Tilhill Forestry
New partnership launched to help meet skills gap in forestry
A LEADING agriculture college has joined forces with the UK’s largest forestry and timber harvesting company to meet a growing demand for woodland workers. Coleg Cambria Llysfasi and Tilhill Forestry unveiled their new partnership - the first of its type - at the APF 2018 show held at Ragley Estate in Warwickshire today (Thursday). The aim of the Tilhill Diploma in Forestry and Woodland Management is to bring the forest industry