For the 115th Anniversary of Harley-Davidson head to Prague 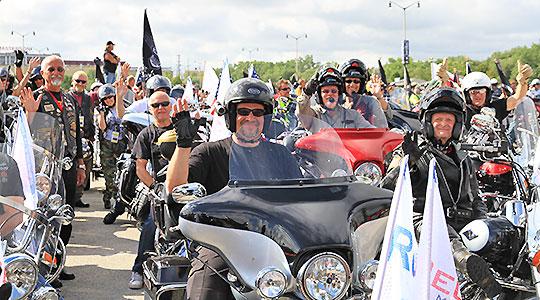 Reuthers presents motorcycle round trips with a visit to the anniversary celebrationThe cult brand Harley-Davidson will celebrate a proud 115 years in 2018. For motorcycle fans, worldwide a reason to celebrate. From July 5 - 8, 2018 the European anniversary celebrations of the legendary motorcycle brand will take place in Prague. A colorful supporting program with exhibitions, music and a biker parade will attract more than 100,000 visitors to Prague to the four-day event. Reuthers presents two Special Event Tours for the anniversary celebration with an included round trip.Tailor-made motorcycle tours for Harley-Davidson fansWhen it comes to motorcycle tours, you can rely on Reuthers. Two carefully arranged travel packages allow the fans of Harley-Davidson to celebrate the 115th anniversary of the cult brand with a round trip and a visit to the anniversary celebrations in Prague. The Event Package 1 ( http://reuthers.com/harley-davidson-115th-anniversary-prague-pack1.html ) will take bikers from July 1-8, 2018 from Nuremberg to Coburg and Dresden to Prague in order to celebrate the 115th birthday of the motorcycle brand. If that is not enough, simply choose the Event Package 2 ( http://reuthers.com/harley-davidson-115th-anniversary-prague-pack2.html ), which is followed by a trip through the Alps after the party. The complete route will lead bikers from July 1-14, 2018, as in the Event Package 1, from Nuremberg to Coburg and Dresden to Prague. Following the anniversary celebrations, the participants will travel through Nuremberg, Munich and Garmisch-Partenkirchen to Kempten and Rothenburg. Finally, the route leads the bikers back to Nuremberg, the starting point of the journey.Harley-Davidson Party in PragueFor many bikers, it is the most important part. The anniversary celebrations of Harley-Davidson are legendary and so it is hardly surprising that over 100,000 people are expected to party in Prague. As a motorcycle fan Hermann Reuther knows exactly what turns Harley-Davidson fans on and manages to make the dreams of his clients come true with these two travel packages.Press Release > For the 115th Anniversary of Harley-Davidson head to Prague: Reuthers presents motorcycle round trips with a visit to the anniversary celebration ( http://reuthers.com/press-release-harley-davidson-115th-anniversary-prague.html )REUTHER-ENTERTAINMENTS, and its brand Reuthers, is a worldwide operating group for Entertainment, Travel and Leisure Activities, with companies in Germany, USA and New Zealand and representatives all over the world. From the beginnings in 1987 Reuthers has arranged thousands of successful events, including travel activities from 1997. With more than 30 years of experience, the founder, and now President, Hermann Reuther, oversees the ability to fulfill dreams and needs. Reuthers can arrange for Clown Dodo at a party, a glamour star at a gala, promote products worldwide, help with health and well-being questions and products, offers dream tours to the paradise of New Zealand or arrange an unforgettable adventure tour on Route 66 on a Harley-Davidson Motorcycle.REUTHER-ENTERTAINMENTS Press and Public Relations Alexander Roth Buchenweg 13 96450 Coburg Germany Fon +49-9561-7059-370 Fax +49-9561-7059-379 eMail: info@reuthers.com Web: http://reuthers.com

12-06-2018 | Leisure, Entertainment, Miscel …
REUTHER-ENTERTAINMENTS GmbH + Co. KG
Reuthers Artist Management and Music Publishing: As of 2019, German Schlager wil …
Since 1987 REUTHER-ENTERTAINMENTS has been active as an event agency and artist management in the field of the German Schlager and has carried out tours with Andy Borg, Kristina Bach, Bernhard Brink, Claudia Jung and Chris Wolff, amongst others. Other well-known Schlager singers have been assigned and booked for various events to date. Artist Management - Music Publishing - German Schlager After building up the worldwide travel division for the past few
01-19-2018 | Advertising, Media Consulting, …
REUTHER-ENTERTAINMENTS GmbH + Co. KG
Reuthers on the road to success with a new partner program: Reuthers launches Af …
As of now, Reuthers offers an attractive affiliate program for booked trips. Interested parties can contact Reuthers if they are keen to join the affiliate program. In addition to a generous registration bonus of 100 Euros, participants receive commissions on every booked motorcycle, photo, bus and rental car trip that lands on their website for Reuthers. Through this new selling channel, President Hermann Reuther enables his partners to participate in
08-01-2017 | Leisure, Entertainment, Miscel …
REUTHER-ENTERTAINMENTS GmbH + Co. KG
Yoshi-O from now on in the Reuthers show program: Japanese Origami Art with ente …
REUTHER-ENTERTAINMENTS is pleased to offer a new show act in their extensive show program. Yoshi-O ( http://yoshi-o.de ) is a tribute to the art of folding paper - called Origami in Japanese. The artist Yoshi-O, delights with an original Japanese costume and her folding skills, which she proves again and again during the events. The Crane as a lucky charm The focus is on the crane, which is a symbol of
08-22-2016 | Tourism, Cars, Traffic
REUTHER-ENTERTAINMENTS GmbH + Co. KG
Motorcycle fans are counting down to the INTERMOT 2016: Reuthers Harley-Davidson …
200,000 professional visitors, motorcycle fans and media representatives will journey between October 5 -9 to Cologne. At that time the doors to INTERMOT 2016 open and every motorcycle fans heart will beat faster. One of the 1.000 exhibitors will be waiting with a very special offer. The Reuthers Team is presenting the Reuthers World of Enjoyment package that contains these highlights: * The possibility for a Meet and Greet with Hermann Reuther