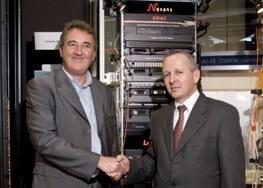 STS deploys Nexans’ leading-edge solutions for different verticals across Jordan; Nexans also appoints new business development manager for its office in AmmanAmman, Jordan, December 17, 2008: Nexans, the worldwide leader in the cable industry and an expert in LAN cabling solutions, today announced that it has signed STS, a leading system integrator as its partner in Jordan. With this new partnership, the cabling solutions vendor will extend its footprint into Jordan’s fast growing ICT market. Nexans also announced the appointment of its new business development manager in Jordan, who will help oversee the operations.Speaking on the partnership, Mr. Tarek Helmy, Regional Director Gulf & Middle East, Nexans Cabling Solutions, said, “Over the past six months, we have expanded our presence in the region through strategic tie-ups and partnerships. STS has an impeccable track record in the Jordanian market for its project management as well as implementation expertise across all the key vertical segments including data centers. STS, which has a strong team of experts with solid local experience, will be a solid partner for Nexans in tapping new opportunities in Jordan. The new partnership will hold the key to providing better solutions and service to our customers in various market sectors.”The new appointment comes close on the heels of some remarkable growth that Nexans has seen over the past few quarters and the vendor has been quick to respond with its expansion plans. It has already appointed partners in some of the GCC markets including Saudi Arabia to consolidate its growth and to deploy its best-in-class solutions. “We have been bringing some innovative solutions to market consistently. With the recent announcements of new channel partners, we have also made it clear that we are committed to the Middle East market and are here to stay and support our customers through our carefully chosen partners. We have also been increasing our own presence in these markets and in Jordan for instance, we have appointed a Business Development Manager based out of there and dedicated to Jordan market with the key tasks to support the channel partners and further promote Nexans solutions to major key customers and end users,” Mr. Helmy added.Nexans recently introduced some revolutionary cabling products such as LANmark 6A (Augmented Cat6) and LANmark 7A (Augmented Cat7) solutions that have been recently defined by Cabling Standards Organizations. In addition, it has showcased its much anticipated green initiative product - the LANsense Next Generation Analyser, which not only saves power but also reduces heat output in data center environments. The manufacturer has a comprehensive product portfolio that includes enterprise LAN infrastructure, data center solutions, remote branch networks, smart building / converged IP applications and its complete solutions for Intelligent Infrastructure Management.Nexans will entrust STS with taking its cutting-edge solutions to market as part of large project installations. Jordan, like some of its neighbouring GCC markets, has seen some rapid increase in ICT infrastructural investments and STS has been at the forefront as a leading system integrator. “We believe in establishing partnerships with industry leading vendors. Our tie-up with Nexans will helps us provide scalable and robust LAN cabling solutions for customers in telecom, Oil & Gas and other verticals. This will be backed with the world-class system integration practises including pre-sales activities, staging environments and after-sales service and support that are integral to STS work culture,” said Mr. Husam Katkhoda, Networking Director at STS.Since its establishment in 1989, STS has contributed significantly to the growth and development of the IT sector in the MENA region. STS’ diversified IT activities, partnerships with industry leading companies such as Cisco, Dell, Hypercom, IBM, Microsoft, and Sun Microsystems, in addition to more than 350 qualified and highly skilled employees have enabled the company to stand firm among the best providers of turnkey solutions to the government, banking, education and telecommunication fields in the Middle East region.About Nexans With energy as the basis of its development, Nexans, the worldwide leader in the cable industry, offers an extensive range of cables and cabling systems. The Group is a global player in the infrastructure, industry, building and Local Area Network markets. Nexans addresses a series of market segments from energy, transport and telecom networks to shipbuilding, oil and gas, nuclear power, automotive, electronics, aeronautics, handling and automation. With an industrial presence in more than 30 countries and commercial activities worldwide, Nexans employs 22,800 people and had sales in 2007 of 7.4 billion euros. Nexans is listed on NYSE Euronext Paris, compartment A. More information on www.nexans.com About STS Since its establishment in 1989, STS has contributed significantly to the growth and development of IT field. STS has expanded its operations by establishing offices in Amman, Dubai, Riyadh, and Ramallah in addition to distributors in Saudi Arabia, UAE, Egypt, Lebanon, Qatar, and Oman. STS has developed strong partnerships with worldwide industry leading companies, such as Dell, Microsoft, Sun, IBM, CISCO, and Hypercom. STS provides the best e-solutions in the region to various sectors including government, banking, education and telecommunications. For further information, please visit http://www.sts.com.joNirmala D'souza PR Consultant OAK Consulting FZC Mobile:+971507343840 Email: nimi@oakconsulting.biz P.O.Box 39261, Dubai, UAE