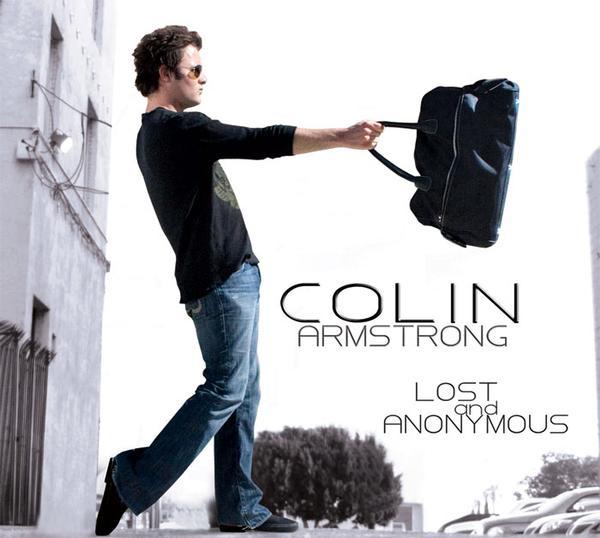 Los Angeles, CA (December 12, 2008)—Award winning artist Colin Armstrong is set to premiere his music video for the single “Hey Yoko” off his debut full length album “Lost and Anonymous” exclusively on the TV-centric music discovery site LP33.TV (www.lp33.tv) Wednesday, December 17, 2008. The video was shot on location in Malibu and Zuma Beach in Southern California, and is directed by Danny Gosser, and produced by Mikal Reid. “Lost and Anonymous,” produced and mixed by Mikal Reid (Mick Jagger, Ben Harper, Aerosmith, Wang Chung) is set to be released January 13, 2009. “Hey Yoko” is the first single off the album, and has already been making waves throughout the music industry with its themes of change at a politically vulnerable time in the U.S. and hopeful references to the great John Lennon. “I have had a vision for this video from the minute we finished the song and I am so happy it will be debuting on LP33,” says Colin. “It is exciting to see what the reaction will be now that an image and a message has been put to the music. Hopefully it will start a healthy conversation. The song is meant to get people thinking, that’s for certain.” Colin Armstrong chose to exclusively debut “Hey Yoko” on LP33.TV, a website that combines the experience of watching exciting, fresh and entertaining indie music TV with the ability to share a fan’s favorite content with friends through their preferred social networks. The site offers the perfect way to discover, experience, and share new music on the web, while also serving as a hub for music fans, musicians, and music industry insiders. The album “Lost and Anonymous” will be available for purchase on January 13, 2009 through iTunes and Rithmetic Records (www.rithmeticrecords.com). Colin Armstrong also plans on playing shows throughout Southern California in 2009 to promote his new album. For more information on Colin Armstrong, please visit www.colinarmstrongmusic.com or www.myspace.com/colinarmstrong. For more information on LP33.TV please visit www.LP33.TV or email info@lp33.tv. For all media inquiries please contact MLC PR at contact@monaloring.com or 818/706.8080.-30-About Colin Armstrong:A native of San Diego, Colin Armstrong is not just a rock singer/songwriter-- he is also a world-class bagpiper. Colin's first break came when he won the "BE A STAR" contest on Los Angeles’ leading rock radio station STAR 98.7. The victory landed him a demo deal with Hollywood Records. Although he was excited to garner a development deal with a prominent label, he didn’t feel like the time was right—so he passed. In the meantime, Colin's song "Lonely Fall" won “Best Male Vocal” and “Best Song” at the San Diego Music Awards followed by a “Best Pop Vocal” nomination for his song “Hey Yoko” at the Los Angeles Music Awards. His song “In Your Eyes" was also chosen for the top ten finals of the 2007 American Idol songwriter contest. It didn’t end here; early 2008 brought Colin a worldwide publishing agreement with NorthStar Media who placed one of his songs, “Nothing More to Say” on the hit Lifetime network show “Army Wives.”About LP33.TVLP33.tv has two connected offerings in the entertainment space. LP33.tv aims to allow consumers to discover, experience and enjoy music and music-themed video content, all while helping new and emerging musical artists to promote and monetize their careers. Bands operate video rich profile pages with built-in stores, and also feature several genre-based video channels operated by LP33.tv. The company’s music content and resources are complemented by the music and recording Trade offering, including the Music Insiders Database (theMIDB.com), a comprehensive, personalized online directory of music professionals. LP33.tv had a ‘soft’ public launch in October 2008 and is still in Beta. LP33.tv is the trading name of myAWOL LLC of the US, a wholly owned subsidiary of myAWOL.com Ltd of England.COMPANY: MLC PR ADDRESS: 30423 Canwood Street Suite 240 / Agoura Hills, CA 91301 WEBSITE: http://www.monaloring.com PRESS CONTACT: Jordyn Borczon EMAIL: jordyn@monaloring.com PHONE: 818-706-8080

You can edit or delete your press release COLIN ARMSTRONG DEBUTS MUSIC VIDEO FOR SINGLE “HEY YOKO” ON LP33.TV here

02-07-2012 | Business, Economy, Finances, B …
Growth Strategist
The Growth Strategist Show® Hosts Michael Clauss
Michael Clauss, will be the featured guest on The Growth Strategist Show® with Aldonna Ambler on February 6, 2012. Ambler and Clauss discuss the LP33 ASIA project and product innovation. In his interview with Ambler, Clauss explains his processes for developing new products and the methods he uses to get new products into use. He reveals his perspective on the ways current new products are developed, shepherded, and funded
Comments about openPR
OpenPR ist the nicest and most clearly laid out PR platform I have seen to this day. The press releases are displayed very nicely and clearly and without any unnecessary frills. The updates are fast and the finished release looks appealing and is clearly legible. Even with 16 years of experience one discovers new things from time to time. Congratulations!
Gabriele Ketterl, Director Marketing & PR, Menads