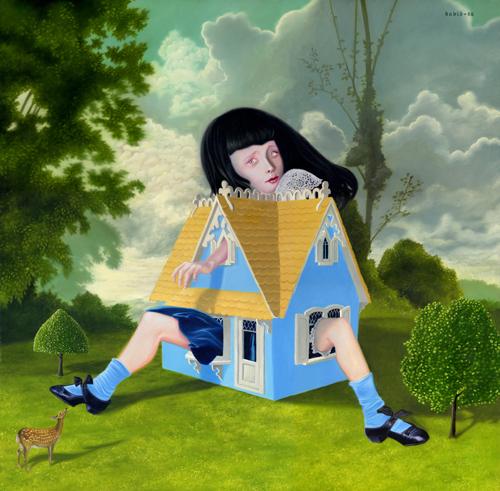 Opening Reception Saturday, December 13, 2008 from 7 to 10pm On View December 13 until December 31, 2008 Corey Helford Gallery 8522 Washington Boulevard Culver City, CA 90232 T: 310-287-2340 Corey Helford Gallery is proud to present “These Predicaments”, a solo exhibition of new works by pop surrealist David Stoupakis. For his second solo exhibition at the Gallery, Stoupakis parlays his talent for the supernatural and macabre into dramatic narratives that reveal symbolic turning points and unexpected dilemmas. A delicate balance of childhood innocence and haunting imagery, the series of oil-on-panel paintings and graphite drawings recounts grim fairytales of the decadent and demure. Marking a new direction for the artist, Stoupakis employs a brighter color palette than before and will unveil his largest piece to date for the exhibition. The reception for “These Predicaments” takes place on Saturday, December 13, and the evening will include music scored by composer Geoff Gersh. Open to the public, the exhibition will be on view until December 31, 2008. Born in Brighton, Massachusetts in 1974, David Stoupakis was diagnosed with a learning disability and encouraged to develop his artistic side as a child. The subject of many teacher-parent meetings, his “gloomy” drawings would later become his signature style of painting. Stoupakis’ images have appeared as cover art for the bands Korn and Haloburn and have been featured in numerous publications including Juxtapoz, Hi-Fructose and Devolution as well as books such as Gothic Art Now and The Upset. Galleries throughout the world have featured his work, including Strychnin Gallery in Berlin, Dorothy Circus Gallery in Rome, and StolenSpace Gallery in London. Stoupakis currently lives and works in Queens, New York with his girlfriend and muse Aprella. For more information about the artist, please visit www.davidstoupakis.com. Located in the Culver City Art District, Corey Helford Gallery was established in April 2006 by Jan Corey Helford and her husband, television producer and creator, Bruce Helford (The Drew Carey Show, George Lopez, The Oblongs). Passionate art collectors, the Helfords are producers on the art documentary The Treasures of Long Gone John and have partnered to open their first gallery. Corey Helford Gallery presents a wide range of artists, from members of the new fine art movement, such as Andrew Brandou, Natalia Fabia, Korin Faught, Eric Joyner, Brandi Milne, David Stoupakis, and award-winning photographer Chris Anthony, to early Modernist William S. Schwartz. Notable shows include “Charity By Numbers”, which was co-curated by Gary Baseman and featured an unprecedented lineup of artists including Mark Ryden, Marion Peck, Shepard Fairey, Todd and Kathy Schorr, Camille Rose Garcia, and Michael Hussar. Corey Helford Gallery presents new exhibitions approximately every four weeks. For more information and an upcoming exhibition schedule, please visit www.coreyhelfordgallery.com. Angelique Groh | Charm School angelique@charmschoolcie.com T: 323-363-9338