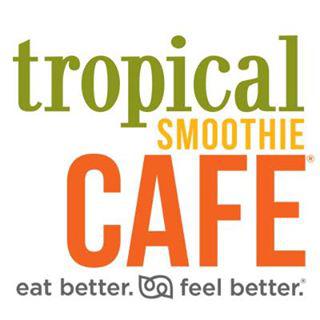 Jacksonville, Fla., June 8, 2017 - Tropical Smoothie Cafés throughout Northeast Florida are offering free smoothies as part of National Flip Flop Day, the company’s own holiday and the kickoff for the fundraising campaign for Camp Sunshine. On Friday, June 16, customers who come to the café wearing flip flops between 2 p.m. and 7 p.m. will receive a free 16-ounce Camp Sunshine smoothie in new limited edition 20th anniversary commemorative cup. “We invite everyone to come visit any of our Tropical Smoothie Cafés and enjoy a smoothie and some fun on us,” said Nick Crouch, owner of 13 Tropical Smoothie Cafes. “There will be dunk tanks, face painters and more at the cafes as we celebrate our customers. National Flip Flop Day is also the kickoff of our companywide fundraising campaign for Camp Sunshine, a wonderful organization that helps children with life-threatening illnesses and their families.”Camp Sunshine, in Casco, Maine on Sebago Lake, provides a retreat for children with life-threatening illnesses and their entire family. Each year, countless families can put away the stress of a life-threatening illness and have a week of fun. It costs about $2,500 to send one family to camp for a week and the camp relies on donations from individuals, foundations, civic groups, and corporations like Tropical Smoothie Café. Over the past 10 years, Tropical Smoothie Café has been able to raise more than $4 million for Camp Sunshine. Donations will be accepted at each of the cafes on National Flip Flop Day and throughout the next eight weeks. Donations can also be made online at www.tropicalsmoothiecafe.com/community.About Tropical Smoothie Café Founded in 1997, Tropical Smoothie Café is a fast-casual restaurant concept inspiring healthy lifestyles across the country, with more than 547 locations nationwide. With snack and meal options for any time of day, Tropical Smoothie Café serves smoothies, salads, wraps, sandwiches, and flatbreads. The rapidly growing franchise has received numerous accolades including being ranked on Entrepreneur's 2016 Franchise 500, 2016 Fast Casual Top 100 Movers and Shakers, Franchise Times’ Top 200+ and Nation's Restaurant News' 2016 Top 200.Tropical Smoothie Café is seeking qualified franchisees to expand throughout the United States in markets such as Miami, Philadelphia, Boston, Houston, Dallas-Fort Worth, Atlanta, Columbus, and Charlotte, among others. For more information, visit www.TropicalSmoothieFranchise.comTropical Smoothie Café - QSR Management Group 9432 Baymeadows Road, Suite 240 Jacksonville, FL 32256 Media Contact: Kelly White Kelly.white@cfmedia.net