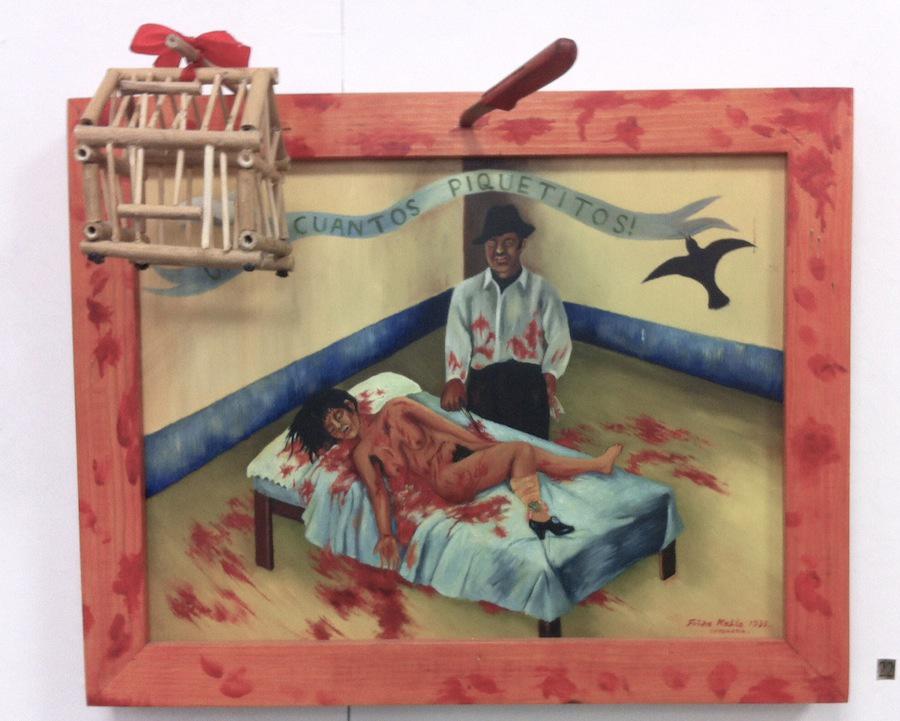 Frida Kahlo Replica of “A Few Small Nips” now on show in Baden-Baden as Frida Kahlo had it in her House.It is almost impossible to determine the single defining moment in Frida Kahlo’s life. Many experts would argue that the bus accident which almost killed her at the age of 17, was this defining moment; others would say that marrying Diego Rivera at 21 was such a life changing experience. Frida Kahlo passionate, tragic, colorful life as an artist and a woman was marked by numerous defining moments which all contributed to make her the extraordinary artist and the inspirational icon she is today.One of these defining moments was certainly the betrayal of her husband, Diego Rivera with Cristina, her younger sister and her best friend. In October 1934 Frida found out that Diego was having an affair with her sister Cristina. In a letter to Ella Wolfe Frida described how devastated she was: “I have never suffered so much in my life, at the beginning I thought there would be a solution, I thought that what happened would be only one time mistake, but every day it is clearer that this is going to be a long term situation with serious consequences. You can’t imagine how much I hate and disgust myself, I have wasted my best years dedicated to do only what would benefit Diego, I have never done anything for me!” In 1935, at the beginning of the affair between Diego and Cristina, Frida Kahlo painted: “A Few small Nips” to capture her pain, her feelings of despair, and how she felt about Diego and above all about herself. The painting was inspired by a newspaper report of a woman murdered by her husband with numerous and repeated knife stabs. The murderer defended his actions before the judge by saying: they were just a few small nips! In this painting Frida Kahlo wanted to show how easily and lightly men, in her case Diego, mortally hurt their women. In the painting the pain is physically deadly; in Frida case the mortal pain is emotional. The painting also shows that this inflicted deadly pain is considered irrelevant by the perpetrator, just “a few small nips.” Frida Kahlo knew that all Diego’s affairs, meant nothing to him,... just “a few small nips”, but for Frida this pain was deadly, just like she painted it. Frida Kahlo often worked on her paintings over the years, adding items and always making her message stronger and clearer. “A Few Small Nips” is an example of this development. Originally the painting had a normal beige color wooden frame and few blood spots; then Frida added a small bamboo bird cage on the top left to match exactly the white dove, which, in the perspective can be seen as if it were inside the cage. Based on photographs of Frida Kahlo in her studio, the Kunstmuseum Gehrke-Remund is showing now a Replica of the painting as Frida Kahlo had it in her house. In the exhibition “Frida Kahlo - Viva La Vida” the painting is show together with the reconstruction of the cage hanging on the top left of the painting. The door of the cage is slightly open, the white dove could fly away but she is not able to. Here Frida illustrated that she could fly away but she is the prisoner of Diego and her love for him. Later on Frida Kahlo planted a knife on the frame of the painting, a reminder of how much Diego hurt her, and over the years she added more blood on the painting; she painted the frame in red-blood and added blood marks on the frame as well. She also stabbed and damaged the frame with the knife; she was hurt and she was angry, and she was slowly finding her own identity. It is as if the affair between Diego and Cristina had given Frida her newly found and very powerful artistic power of expression. The Replica of the painting faithfully reconstructed as Frida Kahlo had it in her house, and as Frida Kahlo intended to be shown can be seen in Baden-Baden, in the Kunstmuseum Gehrke-Remund exhibition “Frida Kahlo - Viva la Vida” together with all Frida Kahlo replicated self portraits, historical photographs and videos in the context of her Blue House in Mexico. The exhibition has been extended for the third time till January 7, 2018.Kunstmuseum Gehrke-Remund Güterbahnhofstr 9 76532 Baden-Baden Germany Tel #: 0049 152 55633001 Press contact person: Dr. Mariella C. Remund Info(at)Kunstmuseum-Gehrke-Remund.deThe founders of the Art Museum are Hans-Jürgen Gehrke and Prof. Dr. Mariella C. Remund. Both are art patrons, collectors and passionate art historians. They have spent over 25 years in executive positions in multinational corporations and academic organizations in Germany, Italy, France, Switzerland, USA, Spain, Mexico, South America and China.Kunstmuseum Gehrke-Remund Güterbahnhofstr 9 76532 Baden-Baden Germany Tel #: 0049 152 55633001 Press contact person: Dr. Mariella C. Remund Info(at)Kunstmuseum-Gehrke-Remund.de