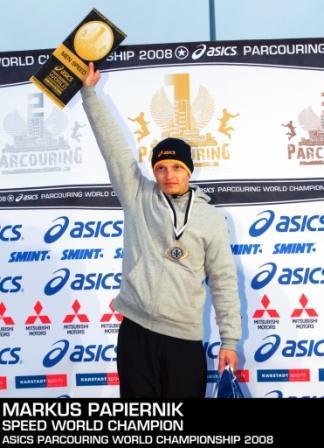 Hamburg: hundreds of thousands of spectators were fascinated by the international Parcouring competitions. These are the new world champions of Parcouring For the second time Parcouring athletes from all over the world came together to determine the best. The ASICS PARCOURING WORLD CHAMPIONSHIP 2008 was part of the culture festival regarding the Day of German Unification.There was quite a neck-on-neck race at the speed contest where the twelve obstacles had to be crossed as fast as possible. The 27 year old stunt professional Markus Papiernik from Berlin (Germany) crossed the course in only 55,32 seconds and left his competition behind him. Thereby he won the title as Speed Parcouring World Champion for the first time. The silver medal went to Gaëtan Bouillet from Belgium. Bronze went to Filip Ljungberg from Sweden.For the first time the discipline concerning style was offered at this year’s world championship. The athletes had the opportunity to show their skills in 45 to 90 seconds. No specific guidelines were set to give the athlete the most possible freedom in creativity. The 16 year old Delian Donchev Dimitrov from Bulgaria and Marcus Gustafsson from Sweden won the gold medal. As the performances were so good, the silver medal also went to two sportsmen: Norbert Béres from Hungary and Amadei Weiland from Germany received the exact same points. Bronze went to the German Joachim Zell. The athletes were evaluated by the judges in the categories execution, flow, show character, creativity and difficulty. Not only were the competitions exciting; the break dance group Mission Impossible from Berlin performed an impressive show with techniques like electro boogie and pop lookin. On top of this the Japanese drum group Tengu Daiko entertained the spectators. This year Parcouring was supported by the sports goods producer ASICS for the first time. Additionally to the extensive commitment of ASICS as the title sponsor of the tour and world championship, they equipped the complete German national team, all officials and numerous volunteers. Markus Hupach, Senior Marketing Manager Sportstyle of ASICS Deutschland GmbH: “The ASICS PARCOURING WORLD CHAMPIONSHIP 2008 was a very successful event, despite the unsettled weather. Thereby it wasn’t only important to elect the best athletes, but to present the sport itself and bring it closer to the spectator. The skills which we saw in the competition thrilled young and old.”The ASICS PARCOURING World Championship 2008 is supported by a number of strong partners. Way out ahead, of course, is title sponsor ASICS. There is also Power Pastille SMINT ensuring essential post-run freshness, Web TV partner YUR.tv with its own Parcouring Channel and obstacle builder Funtrade. Now three further partners are supporting Parcouring. After the successful support of the well-known department store Karstadt sports during the ASICS PARCOURING TOUR, they decided to provide a special obstacle for the World Championship; the athletes had to cross a Mitsubishi L200. Also Mitsubishi Motors Germany GmbH will be appearing as official automobile partner. The obvious branded Mitsubishi Colt CZC Cabriolet wasn’t to be overlooked. whilst the Le Royal Méridien Hamburg will feature as exclusive hotel partner. Furthermore the ASICS PARCOURING World Championship had an exclusive hotel partner – the Le Royal Méridien Hamburg. The five star hotel at the Außenalster proves the unique relation between the sense of art and technology. Fans who couldn’t be on site, can see the highlights of the event on the Parcouring Channel on YUR.TV.As service for all journalists who couldn’t be on site: The TV production company Quattro Media will provide the TV footage/rough cut on a FTP Server as a download for free. If interested please contact Michaela Janas: 0049 8093 572 28Kultos Entertainment Ltd. plans and executes unusual sports events. Furthermore the agency can support companies in three cateories: PR, design and events.Kultos Entertainment Ltd. Public Relations Friedrich von Schiller Straße 25 95444 Bayreuth Germany(Phone) +49 (0) 921 150 10 62 (Fax) +49 (0) 921 507 53 93 (Em@il) pr@kultos.de