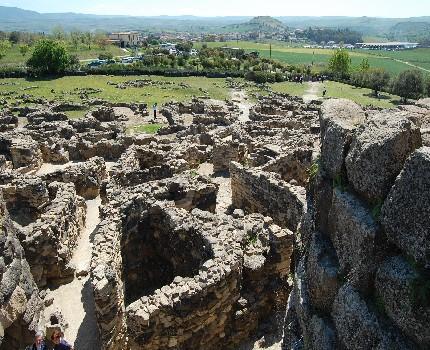 The nuraghic village of Barumini in Sardinia.

The nuraghe is the main type of megalitic edifice found in Sardinia, dating back before 1000 B.C.. Today it has come to be the symbol of Sardinia and its distinctive culture. The architecture produced by the nuragic civilization was the most advanced of any civilization in the western Mediterranean during this epoch. Today more than a 1000 of nuraghes have been found, these type of tower constructions are mainly situated in panoramic spots.The most important nuraghic complex is “Su Nuraxi” at Barumini, recognised in 1997 as World Heritage Site by UNESCO. The first excavations were done in the fifties by the archeologist Giovanni Lilliu and discovered the nuraghic village. The building is constituted from the central part contained from a bastion quadrilobate and surrounded by towers and huts, built in the 2nd Millennium B.C.The central tower, has the shape of a truncated conical tower resembling a beehive and is about 18 metres high. The central tower is surrrounded by other four smaller towers and wall defences.During the third century B.C. with the arrival of the Romans, most nuraghe were being abandoned. But archaeological excavations proved that Barumini was being inhabited until the third century A.C.The archaeological site of the Nuraghe of Barumini is easy to be found and can only be visited with guided tours (the site is run by expert guides). In the neighbourhood of Barumini you have other important nuraghes such as “Su Mulinu” of Villanovafranca and its archaeological museum.Sardinia Natour, a travel agent who organizes vacations in Sardinia, offers small and charming accommodations like farmhouses, Bed & Breakfast, small residences, hotels, self-catering apartments, cottages, villas, and in addition trekking and mountain bike tours, italian language courses, car rental and ferry boat booking.Sardinia Natour Via Carrara 22 I-09125 Cagliari / Italy Phone: +39 070 3481458 Mobile: +39 347 4883985 email: info@sardinianatour.com

You can edit or delete your press release Sardinia's World Heritage Site: The nuraghic village of Barumini here