Testing of a compressor for a new Indian aero engine 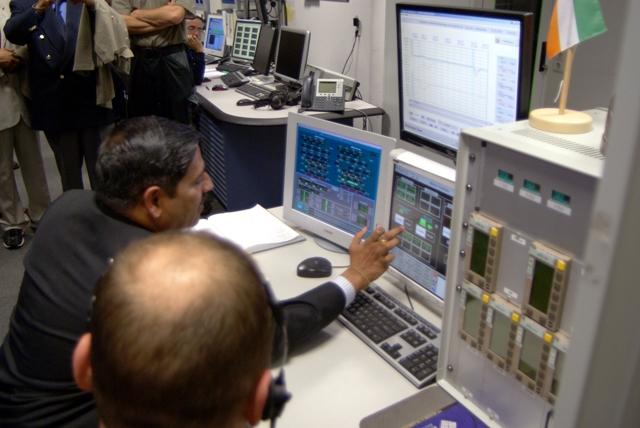 Test start of the Indian Compressor

On September 22nd 2008 AneCom AeroTest started the test of a compressor for a national organization from India. The compressor is a substantial component for a new aero engine development in India. During a celebration the director of the national Indian organization gave his approval for testing of the compressor and personally pressed the start button in the test control centre. After a short examination of all operating parameters the first characteristic compressor map measurements were accomplished. The first run of the compressor was without any problems and all fulfilled expectations. The joint project between AneCom AeroTest and the Indian Authority was agreed upon at the end of 2006, after AneCom AeroTest the tender against strong national and international competitors. The design and manufacturing of the inlet - and exhaust section as well as the complete instrumentation and assembly of the compressor rig were accomplished by AneCom AeroTest. The compressor module itself was delivered by the Indian customer. This order represents a further important milestone in the development of AneCom AeroTest to an internationally operating company. At the same time thereby the evolution is consistently continued to an important and world-wide operating supplier for design, make and test of aero engine and gas turbine components. After co-operation between the Indian and German project team took place smoothly, at present intensive negotiations over an expansion of the co-operation take place.With more than 100 qualified and committed employees, AneCom AeroTest offers customers all around the world attractive overall solutions for development, aerodynamic optimization and testing of turbo engines and gas turbines by means of our rather unique one-stop-shop. Since 2002, we have been maintaining a highly productive engineering office in the centre for aerospace "Schönefelder Kreuz" of the capital city region Berlin Brandenburg and we are also running a highly modern compressor test centre with three test beds and appendant shops. The vicinity to the Technical College of Wildau, to suppliers and to cooperation partners as well as the existing infrastructure offer excellent conditions for development.Marc Becker Vice President Business Development AneCom AeroTest GmbH Freiheitsstrasse 122 15745 Wildau Tel: 03375 92 26 42 Fax: 03375 92 26 66 Mobil: 0173 603 46 12 eMail: marc.becker@anecom.de

02-10-2014 | Industry, Real Estate & Constr …
AneCom AeroTest GmbH
Successful Trend Monitoring on Modular Test Setups
Successful Trend Monitoring on Modular Test Setups How to apply Trend Monitoring successfully to modular test setups? How is it possible to provide data describing operating conditions and status information if each test configuration is characterized by a different operating response? How is it possible to estimate the rig time-to-failure under those conditions? These and further questions about the challenges of Trend Monitoring on modular test setups will be answered by
09-23-2013 | Industry, Real Estate & Constr …
AneCom AeroTest GmbH
Noise reduction at source
AneCom AeroTest tests innovative aero engine FAN For the noise reduction research of leading aero engine manufacturers AneCom AeroTest tested an innovative aero engine FAN in its anechoic chamber. The tests included the examination of several components before and behind the FAN and their impact on dynamical and acoustic characteristics. With the help of the quickly convertible UFFA-Rig (Universal Fan Facility for Acoustics-Rig) the tests could be accomplished within a very