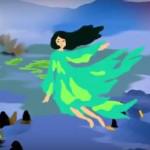 LindaBeers.com has just released an environmentally inspired video which uses the metaphor of an old Chinese folk tale to tell the story of extinction. Using original violin music, poetry and animation, "Song of Spring" tells the story about a beautiful Chinese girl who is the beloved of a local farmer who only admires her from a distance. One night, the girl (Hualing) is spirited away in a dream by unknown forces. She is carried over mountains with sharp edges, dirt, and sea. She eventually disintegrates into dust, never to be seen or heard from again.Inspired by the Discovery Channel's documentary "Racing Extinction" in which the story of the Kauai O’o bird's extinction is revealed, it shows that the O’o bird was essentially loved to extinction. This species became extinct in 1987. O’o birds were singing birds and the final male bird sang for a female bird who would never reply."After watching this documentary, I knew that I had to do something to bring awareness to extinction," states Linda Beers, violinist and author of "Song of Spring." "I have always been concerned about the environment, the welfare of animals, and human rights. When I was in high school, I performed a folk song for a Chinese New Year celebration held at Brookhaven National Laboratory. The impact of playing this song to the audience made a permanent impression on me in terms of how music can transport one to a completely different place and time. So perhaps a video weaving violin and poetry would have a great impact as well on the topic of extinction."The "Song of Spring" animated video runs just under three minutes. The violin solo "Song of Spring" was written in the spring of 2016 for an Earth Day program performance. The script and scene descriptions were written in the fall of 2016. Next to follow was collaboration with animator Susan Lee, a connection through Full Sail University. In mid February, 2017, actor Cecilia Lee recorded the voice over narration.The message of this movie is to not be like Chaoxiang. If there is something you feel strongly about, don’t wait to act upon it because you might lose your opportunity forever.For more information and to view the video please visit http://lindabeers.com/song-of-springThe Linda Beers Violin Studio is a home studio located in Avon, CT. It was founded by Linda Beers Violinist and teacher in 1995. Suzuki and traditional violin methods are taught here.Linda Beers Conifer Lane Avon, CT 06001 press@lindabeers.com 860-470-6375

12-06-2017 | Leisure, Entertainment, Miscel …
Music Promotion Club
Jayroddy Has Released His Refreshing Song “D.I.D”
Hip-hop music is one of the stunning genres of music as it has the presence of heavy rhythm, skilfull beat and magnetic lyrics. JayRoddy is one of the awesome hip-hop stars with his mesmeric talent of music craft. Be it from his vocal to the rhythm, everything about him is praiseworthy. His consistent use of rhymes and some accompaniment of instruments will make you crazy. The lyrically dexterous music “d.id”
04-12-2017 | Leisure, Entertainment, Miscel …
YOLO Music
New addicitve Easter song released
The Easter song “Happy Easter!” was first published in German last year and has had over 250,000 views on YouTube so far. Children can’t get enough of the addictive song and the professional and very cute 3D-animated video. Now it’s available in English, too. The video can be watched on YouTube – with or without lyrics – bought on iTunes or streamed on Spotify. YouTube: https://youtu.be/VxBQgDXVG_Q iTunes: https://itunes.apple.com/de/album/happy-easter-single/id1225517646 Lyrics: Hello, I am the Easter Bunny My nose
11-07-2012 | Leisure, Entertainment, Miscel …
Internet DienstleistungsGmbH
ViennaCC Launched Music Video To Song "Why"
The Austrian music & video producer ViennaCC uploaded a music video titled "Why" on YouTube, a song from the latest album "Going Out For Summer." The song is about love saying "I don't know why you gave me no reply". The music video "Why" is made of photos compiled to a video. ViennaCC: "I wanted to make something different, not a musician standing anywhere and singing the song. That would be too simple.
12-07-2011 | Arts & Culture
Redlight-Media
Marq Aurel feat. MeeShaill new dance song
Turn up the volume for Marq Aurel's brand new winter dance hit featuring MeeShaill. Crackin basses warm up the floors during the cold season and enchanting vocals by the talented singer MeeShaill make this great track perfect. MeeShaill is the singing part of the TWIN M project and gave his voice to the song "Came to say Hello". After having great success with his latest releases "Road Rat", a co-production with BEATBREAKER which
11-05-2011 | Health & Medicine
General Hospital
Scientific Conference Song: A World Without AIDS
The organizers of the 2012 ISHEID announce the release of a song dedicated to the fight against HIV and AIDS. Toulon, Var, France, November 04, 2011 -- The ISHEID (International Symposium on HIV & Emerging Infectious Diseases) will be held in Marseilles (France), 23-25 May 2012. This scientific meeting will welcome more than 1,500 participants from all over the world, including researchers, doctors, and activists, all united for a cause: “Searching
04-14-2011 | Business, Economy, Finances, B …
Song Management Group
Song Management Group Announces European Expansion
Song Management Group (songmanagementgroup.com) Company News. Song Management Group Announces European Expansion Shanghai, 14th April 2011. Song Management Group (songmangementgroup.com) has announced it is searching for two new European partners. The expansion move is aimed at identifying new client potential and overseas market opportunities as well as managing the company's existing assets in Europe. "Locating teams on the ground in important markets like Paris and Frankfurt for example means we are able to continue
Comments about openPR
We publish our press releases on openPR.de because we like people who are "open" - just like us.
Frank Obels, CEO, INCONET - Informationssysteme, Communication und Netzwerkberatung GmbH