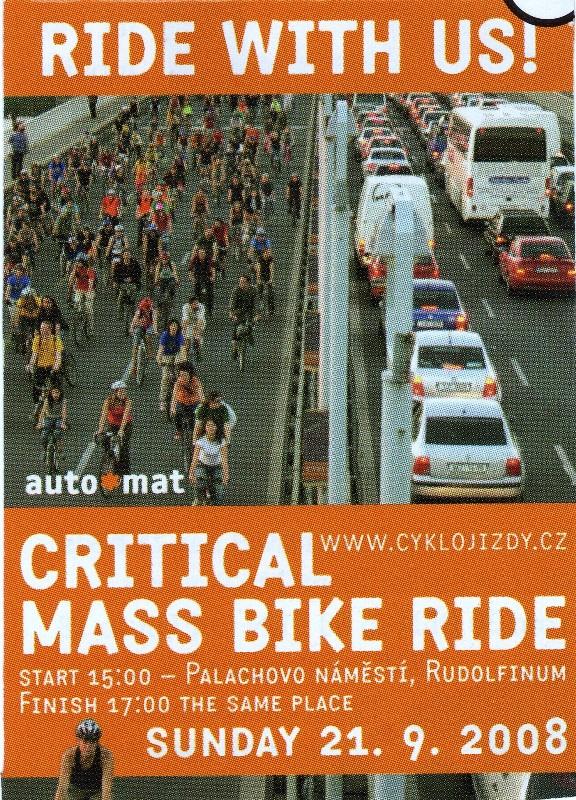 The largest Czech Critical Mass Bike Ride will take place on 21th September 2008 in Prague. Up to 4,000 people of all ages are expected to take part at the approximately 1,5 hour and 15 km-long ride. It will start at the street festival „Car free Day“ in front of the Rudolfinum at 3 pm and weave through the city streets, to finally join the street festival again. The aim of the Critical Mass Bike Ride is to promote a sustainable and social alternative to motorized transport and to lobby the authorities to improve the local infrastructure for cyclists in the city center. The speed of the ride will be suitable for young and old. All people living in and visiting Prague are invited to join the ride. The large Critical Mass Bike Ride in September every year is the highlight of the monthly Critical Mass Bike Rides held on every third Thursday in Prague. Since 2001 when the first Critical Mass Bike Ride started with only a few people the number of participants increased enormously up to more than 2,500 last year. This year even up to 4,000 people are expected to join the Ride in the Czech Republic to peacefully celebrate cycling as legitimate means of transport and to assert cyclists' rights to the road. Since the 1990s, car use has increased exponentially in Prague and today the city has one car per every two inhabitants. This means that by a population of 1.2 million, about 600,000 cars are used on the streets of Prague. On the other hand, while there are approximately the same number of bicycles in Prague, the majority are not for daily transport due to the auto’s predominance in the city. Critical Mass Bike Rides are held to call attention to this single sided traffic strategy and to encourage people to call for more bike paths in the inner city center. Critical Mass Bike Rides are celebrated all over the world since the first mass bike ride took place in San Francisco, California in 1992. About ten years later its tradition began in the Czech Republic. Besides Prague, Critical Mass Bike Rides are held in Brno, Liberec, Náchod and Olomouc. The Organizer of this year’s September Critical Mass Bike Ride in Prague is the Czech non-governmental organization Auto*Mat, which works in the field of sustainable mobility with the aim to improve the living conditions in Prague. Critical Mass Bike Ride Place: Prague, Czech Republic Date: 21th September 2008 Start: 3 pm Palachovo Náměstí, Rudolfinum Finish: 5 pm at the same place For More information on Critical Mass Bike Rides in Prague please visit: http://www.cyklojizdy.cz/ For more information on Auto*Mat please visit: http://www.auto/mat.cz http://www.auto-mat.cz/english.php Auto*Mat is a Czech non-governmental organization working in the field of sustainable mobility with the aim to improve the living conditions in Prague. Auto*Mat offers information on sustainable means of transportation for both public and politics and stands up for environmentally friendly mobility, more public transport, more cycling, more walking and better traffic safety. Auto*Mat was founded as an initiative in 2001 by various individuals working in the field of environment, culture and art with the aim to give direction for a change in the current mainly on motorized transport focused traffic strategy. After a loose range of events and monthly critical mass rides Auto*Mat decided to achieve the legal status of a non-government organization in September 2007 to fortify its work on this urgent matter. Auto*Mat has currently 6 official board members and about 30 volunteer coordinators. More than 3,000 inhabitants of Prague support the aims of Auto*Mat, 300 of them active. The vision of Auto*Mat is to change the current situation on the streets of Prague where cars prevail over people. The vision is to make them alive with people again, to give the city centers back to the people and turn it into places of cultural life again. Auto*Mat supports an open communication between cities and communities to find solutions for a sustainable traffic strategy. A digital press-kit (pdf, 1400 kb) about the Critical Mass Bike Ride 2008 is available. Please send a short notice to: margit.brack@auto-mat.cz Auto*Mat Margit Brack Lublaňská 18 120 00 Praha 2 margit.brack@auto-mat.cz http://www.auto-mat.cz http://www.auto-mat.cz/english.php

07-26-2017 | Tourism, Cars, Traffic
REUTHER-ENTERTAINMENTS GmbH + Co. KG
For the 115th Anniversary of Harley-Davidson head to Prague
Reuthers presents motorcycle round trips with a visit to the anniversary celebration The cult brand Harley-Davidson will celebrate a proud 115 years in 2018. For motorcycle fans, worldwide a reason to celebrate. From July 5 - 8, 2018 the European anniversary celebrations of the legendary motorcycle brand will take place in Prague. A colorful supporting program with exhibitions, music and a biker parade will attract more than 100,000 visitors to Prague
11-18-2010 | Tourism, Cars, Traffic
Globester
cheap flights PRAGUE
Nothing short of being a dreamy place replete with magnificent castles and forts, natural beauty adorning the city’s every nook and cranny, amazing spectacles awaiting you everywhere, Prague is certainly the stuff fancies are made of. Picture-perfect, pristine and terribly appealing, the city leaves you completely mesmerized by the end of it all. Having played home to many famous composers and celebrated artists, the capital of Czech Republic is a
07-08-2008 | Arts & Culture
Amazing Concepts GmbH
AmazingPrague.com – The International City Guide for the City of Prague
Dusseldorf, 8 July 2008 – Prague is a great place for working, living and visiting. Ranking 6th among Europe’s most visited cities by tourists the golden city is well known for its beauty and historical wealth. Prague has managed to define itself as entry point for business and commerce in Central Europe as it attracts a large wave of foreign companies. The City still experiences an economic boom and scores
08-29-2007 | Tourism, Cars, Traffic
WORLDHOTELS
WORLDHOTELS welcomes Prague Imperial Hotel
Frankfurt, August 29, 2007 – WORLDHOTELS is pleased to announce the Prague Imperial Hotel as their newest member. The hotel, re-opening this month, offers luxurious Art Deco accommodation in the heart of Prague’s city centre, close to business and historical sites. The 126 room boutique hotel has had a complete refurbishment, with careful maintenance being paid to the ceramic mosaic that adds a timeless elegance to this unique and historical
07-02-2007 | Advertising, Media Consulting, …
Zarkin and Partners
Dispute at Product Placement in Prague
On the 18th of June in Prague Gene Zarkin held a seminar at the conference “Product Placement – new Era of Advertising”, which was organized by the international company MARCUSEVANS. Seminar on the topic of “How to minimize the risk of wasting time and money while making investments in product placement” caused such a huge discussion. Some part of the participants thought that maybe the technology, which Gene was telling
04-26-2007 | Leisure, Entertainment, Miscel …
EuroBookings.com
European Travelers Gear Up for Springtime Cultural Celebrations in Prague
Prague, Czech Republic – April 27, 2007 – The staff at EuroBookings.com (eurobookings.com) say that tourism in Prague has increased dramatically over the last several years based on their observation of a growing percentage of interest in Prague hotels. With the start of two important festivals in May, the company’s web stats show that interest in Prague hotels has reached an all-time high for 2007. The Prague Spring Music
Comments about openPR
I can't but agree to the positive statements about your portal: easy to use, clear layout, very good search function, and quick editing!
Jens O'Brien, Borgmeier Media Communication