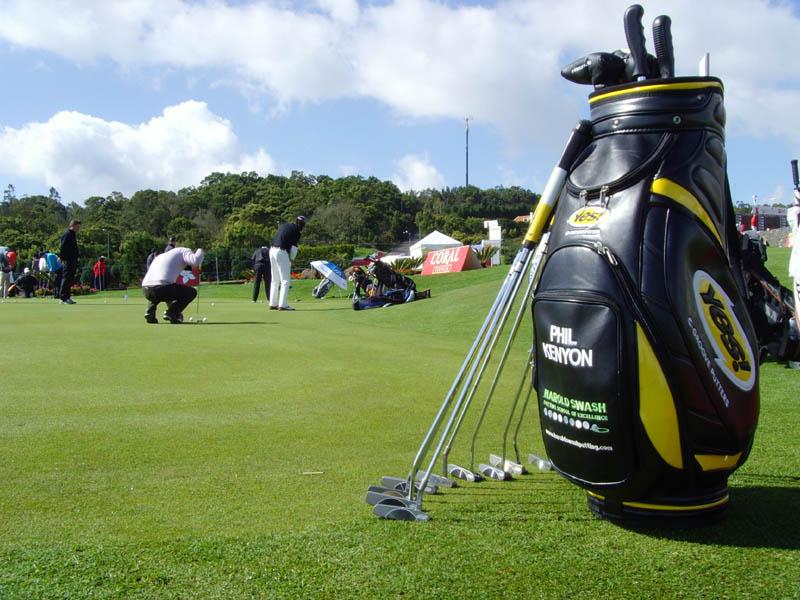 From Phil Kenyon, Director of Instruction Harold Swash Putting School of ExcellenceA reduced field for the Mercedes Championship at the Gut Lärchenhof Club didn't stop the putting green being a busy place this week. I spent some time with Darren Clarke on Tuesday. Darren is still enjoying his new Callie putter with prototype weighted shaft, which he feels has helped improve his stroke. We worked on a few others aspects of his set up and technique and used the high speed camera for some feedback during the session. Check out the video of Darren below.On both Tuesday and Wednesday I spent some time also with David Howell. I measured David on the SAM Puttlab so as to specifically analyze his stroke and give his some direction and feedback for his practice. The data raised a fitting issue that was affecting his alignment so we made up a new putter for David at a different spec. To view David at work during the session follow the link to the European Tour Weekly section of the website www.europeantour.comStuart Appleby also picked up a new putter this week, a Tracy 2, the same model he won 3 times with on the US Tour. Mads Vibe Hastrup also picked up a Callie with a prototype weighted shaft similar to Darren Clarkes that he will test in practice. The new weighted shaft has generated some interest from the players and can really help a players technique through the unique weighting and balance of the club.On Wednesday I also spent met up with Maarten Lafaber and Ollie Fisher. Both players were analyzed using the SAM Puttlab from which we were able assess their progress.During the practice days also I spent some time with Alex Noren, getting him on the SAM Puttlab and high speed camera and giving him some drills to integrate into his practice.Next week its the Ryder Cup and I will be looking forward to watching HSPSE pupils Oliver Wilson and Henrik Stenson in action. The next event I will be at with be the British Masters at the Belfry the week after Valhalla.About YES! Golf Yes! Golf, based in Denver, Col., is the proven leader in grooved putter technology. Harold Swash, known as the European putting doctor, introduced the innovative theory of concentric grooves in 1995. Today, C-Groove putters are taking the golf world by storm making Yes! Golf one of the fastest growing putters on the professional tours. For more information on Yes! Golf call 800.845.4327 or www.yesgolf.comAbout Harold Swash Putting School of ExcellenceHarold Swash has more than 40 years of experience in the golf industry as a coach, golf club designer and inventor of putting training aids. Harold has coached many of the top professional and amateur golfers with his innovative putting training techniques including Padraig Harrington, David Howell, Henrik Stenson, Niclas Fasth, Soren Kjeldsen, Darren Clarke, Ian Woosnam, Constantino Rocca, Robert Jan Derksen, Oliver Wilson and Nick Faldo to name just a few.Harold Swash is making his teaching philosophy available for all keen golf teaching professionals who want to learn how to teach Putting better. For more information about The Harold Swash Putting School of Excellence go to www.swashputtingschools.comSwash Putting Schools Asia/Pacific, Australia, South Africa, Middle East 27a Banastre Road Southport PR8 5AW Merseyside United Kingdom PR9 7SWContact: Michel Monnard, Aptdo 44, 07580 Capdepera (Mallorca/Spain) Email: michel@swashputtingschools.com Phone: 0034 639635634Yes! Golf 7808 Cherry Creek South Drive, Suite 103 Denver, CO 80231 www.yesgolf.comFor further press information and photography please contact Dominic O'Byrne at O'Byrne Communications via +44 (0)113 255 4114 or dominic@obyrne.co.uk.For technical information and sourcing product in Europe, please contact Aad van Os at Approach Golf on +31 (0) 77-4748293 or via a.vanos@approachgolf.nl