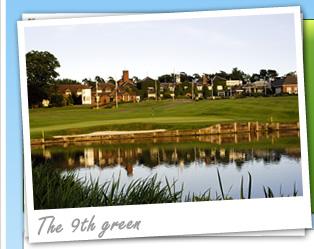 A commercial gas engineer from Beccles in Suffolk has found a hidden talent as a golfer. Alan Ereia (41) only started playing golf just over three years ago, but is now a hot favourite to win new UK golf tournament, Real Open Golf (www.realopengolf.co.uk)."Last year I was playing off a handicap of 17, now I'm playing off 11," says Alan. "That puts me in with a fighting chance of taking the trophy. But I'm not resting on my laurels. There's a way to go yet."The Real Open Golf grand final will be held at the Belfry on 9 May 2009 - with top European coach Gary Alliss on hand to offer tips and advice to contestants.Considering Alan only started playing golf three years ago, he's made remarkable progress. But even the first time he picked up a golf club, he found he had a natural talent for the game."My brother had been playing golf for some time and he invited me to try out the game," recalls Alan. "I'd never picked up a golf club before, but after playing 18 holes we finished even. My brother then went away to work for a while. Before he went I said to him 'I'm going to be practising while you're away and next time I'll beat you!'"Alan duly bought himself a set of cheap golf clubs and hit the range on a regular basis."When my brother came back I beat him and have been beating him ever since!" says Alan.Apart from becoming a finalist in the forthcoming Real Open Golf grand final, Alan's ambition is to become a single figure handicap player."The average handicap across the world is around 18," says Alan. "So it would be great to be able to say I was playing off a 5 or even an 8. Anyone in that league has just got to be a bloody good golfer."Alan plays regularly at Beccles Golf Club and this year holds the captaincy, having been secretary of the club for nearly three years.He admits to a secret admiration for Tiger Woods, but his real golfing hero is Lee Westwood. "I love the way he swings a club," says Alan. "And it would be great to seem him and Padraig Harrington alongside each other challenging Tiger."In his determination to improve his game, Alan plays twice a week. But says the real key to his success is taking two or three video lessons from a local pro every year."I don't believe in weekly lessons, you just can't take in the information, not physically, anyway," he says. "But with video lessons you've got the whole thing on DVD and can watch it over and over again and really assimilate what your teacher has shown you. Then, and only then, do you go back for another lesson."Real Open Golf is a new UK based golf tournament. Its grand final is held every year at world famous Belfry golf venue in the Midlands.Further InformationReal Open Golf http://www.realopengolf.co.ukReal Open Golf Rowan House, Queens Road, Hethersett NR93DB Tel: 0844-8009733Email: christian.realopengolf@googlemail.comContact name: Christian Thurston

09-12-2008 | Sports
Real Open Golf
Sherborne golfer on track to win the Real Open Golf Championship
An internet specialist from Sherborne has lowered his handicap from 12 to 5 in less than three years - putting him in line to compete at the Belfry in a new amateur golf tournament. Ed Elliot-Square (30) has been devoting all the spare hours he can find to improving his game, with view to winning a place in the final of the 2008 Real Open Golf championship. "I'm making a serious
09-10-2008 | Sports
Real Open Golf
Nottingham golfer on course to win new UK golf tournament
An amateur golfer from East Bridgford, Notts, has surprised friends and colleagues by coming out tops on the leaderboard of a new UK golf championship. Steve Lambourne (50), a financial advisor at Routen Chaplin, has pulled out the stops this year and could well secure himself a place in the grand final of the Real Open Golf tournament, to be held at the Belfry on 9 May 2009. "I started this
09-10-2008 | Sports
Real Open Golf
13-year-old Castle Cary golfer has sights set on becoming the next Paul Casey
A young golfer from Castle Cary, Somerset, is well on the way to achieving his dream of following in the footsteps of his golfing hero Paul Casey. Josh Knight (13), who attends Ansford School, Castle Cary, is riding high on the leaderboard of new UK amateur golf tournament, Real Open Golf (www.realopengolf.co.uk). He won the junior final in 2007. And currently, Josh has a handicap of six, and is practicing hard

08-29-2018 | Business, Economy, Finances, B …
Apex Market Research
Global Copper Stranded Wire Market 2018 - Pewc, Sarkuysan, ADC, Alan Wire
Apex Market Research, recently published a detailed market research study focused on the "Copper Stranded Wire Market" across the global, regional and country level. The report provides 360° analysis of "Copper Stranded Wire Market" from view of manufacturers, regions, product types and end industries. The research report analyses and provides the historical data along with current performance of the global Copper Stranded Wire industry, and estimates the future trend of
06-27-2018 | Health & Medicine
Black Card Books
Alan Steelman Releases His New Podcast Show: Exiting the A.S.A.P. Lane with Alan
Former U.S. Congressman Alan Steelman (R-Tex) is all set to release his new podcast show which is called Exiting the A.S.A.P. Lane with Alan. A.S.A.P. stands for anxious, stressed, addicted and pressured, and Alan aims to help guide people to lives with more balance and equilibrium. Alan Steelman has developed an exciting new podcast which is all set to release soon. His podcast is called Exiting the A.S.A.P. Lane with Alan.
01-09-2017 | Politics, Law & Society
Archer Communications, Inc.
Trevett Cristo Announces Alan De Peters as Partner
Trevett Cristo P.C., a NY-based law firm with expertise across a broad range of commercial and personal practice areas, is proud to announce Alan J. De Peters has been named Partner. De Peters is an accomplished trial lawyer practicing across Upstate New York and has substantial experience across a comprehensive range of practice areas, including insurance defense and coverage litigation, commercial litigation, personal injury and landlord and tenant law. “I am proud
02-02-2012 | Health & Medicine
Steljes Cardiology
Dr. Alan Steljes Receives Board Certification in Sleep Medicine
HENDERSON, Nev. – (February 1, 2012) Steljes Cardiology, a full-service cardiology practice, diagnostic sleep center and clinical research center, announced today that Dr. Alan Steljes has been certified in sleep medicine by the American Board of Internal Medicine. To become certified in the subspecialty of sleep medicine, a physician must pass the Sleep Medicine Certification Exam, demonstrate clinical expertise and have a track record of impeccable ethical behavior. The Steljes Healthy Heart
01-21-2012 | Business, Economy, Finances, B …
8 Solutions
Alan Howarth appointed Chairman at 8 Solutions
8 Solutions, the UK’s leading data centre healthcare company specialising in the deep cleaning and decontamination of critical environments has today announced the appointment of Alan Howarth to the position of Chairman. For the last 12 years Alan has successfully run a significant portfolio of Non Executive Director positions in a variety of sectors. He has been Chairman of listed companies, AIM organisations and private businesses. His current portfolio
08-19-2010 | Business, Economy, Finances, B …
David Nour Certified by Alan Weiss as a Master Mentor℠
David Nour Certified by Alan Weiss as a Master Mentor℠
Atlanta, GA – August 17, 2010 – David Nour, author of Relationship Economics (Wiley) and CEO of The Nour Group, Inc., has been certified by Alan Weiss as a Master Mentor. Nour is one of only 24 consultants in the world accredited as a Master Mentor by Alan Weiss in his global community of consultants and entrepreneurs. The Master Mentor certification will complement The Nour Group’s Relationship Economics® methodology which
Comments about openPR
OpenPR is clearly structured and remains true to its principle of confining itself to the essential parts. OpenPR has proven to be a very good and reliable partner to our media agency: Within the shortest time the releases are online and go down well with the media representatives. The success of OpenPR is reflected in the steadily increasing number of press releases. It is good that OpenPR exists!
Ursula Koslik, Director Marketing & PR, F+W Hamburg