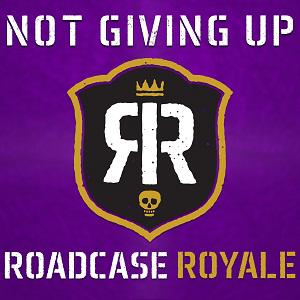 Not Giving Up marks the band’s second single and follows their debut single release Get LoudLos Angeles, CA, May 10, 2017 – Rock and R&B-influenced group Roadcase Royale will be releasing a brand new single entitled Not Giving Up on May 12th. The band is fronted by Rock and Roll Hall-of-Famer Nancy Wilson of Heart and Liv Warfield of Prince’s New Power Generation, and also includes members from each of their respective bands. Not Giving Up is a hard rock song that contains politically charged lyrics, following in the footsteps of the band’s debut single, Get Loud, which debuted at the January 21st Women’s March. The video for “Not Giving Up” will also be released next week via the group’s YouTube channel.The track opens with Ryan Waters iconic bluesy guitar riff followed by the powerful entrance of the full band. The intensity level builds up during the first verse and climaxes at the chorus with the return of the same driving guitar riff and Warfield’s searing vocals. The song’s refrain sends a message to stay strong in today’s politically divisive times, saying, “We watch you building up the wall, We’re waiting just to see it fall,?I’m saying we’re not givin’ up, givin’ up, no.” With powerful lyrics and their full-tilt musicianship, Roadcase Royale will be “Not Giving Up” anytime soon.Nancy Wilson had this to say about the “Not Giving Up”: "The first time I listened to Liv and Ryan’s track of Not Giving Up I was floored by the deceptive simplicity and the powerful message of their song. I could hear the potential to make it our own. I knew right away we would be able to take that song not just for a test drive but straight onto the big rock race track!" More about ROADCASE ROYALE: Led by former Prince collaborator Liv Warfield and Nancy Wilson, co-founder of Heart, ROADCASE ROYALE has a rich background in rock and R&B. Warfield, Wilson, and their bandmates bring their decades of experience from the upper echelon of the music industry to ROADCASE ROYALE, along with a renewed sense of direction and drive. Joining Wilson and Warfield are Warfield’s lead guitarist and musical director Ryan Waters and Heart veterans Dan Rothchild (bass), Ben Smith (Drums) and Chris Joyner (Keys). Each of these members shine in ROADCASE ROYALE with their various sensibilities creating the group’s sensitive, passionate, and driving rock and R&B sound.Follow ROADCASE ROYALE on: Website: http://www.roadcaseroyale.com/ Facebook: https://www.facebook.com/roadcaseroyale Instagram: https://www.instagram.com/roadcaseroyale/ Twitter: https://twitter.com/roadcaseroyaleFor more information or a review copy of “Get Loud” or “Not Giving Up” please contact:Contact: Chip Schutzman Miles High Productions PO Box 93157 Hollywood, CA 90093 323-806-0400 chip@mileshighproductions.com http://www.roadcaseroyale.com/

08-14-2018 | IT, New Media & Software
Genesis market insights
Military Robot Market By Platform (Land Robots, Marine Robots, Airborne Robots), …
GLOBAL MILITARY ROBOT MARKET was valued at USD 16.01 Billion in the year 2017. Global Military Robot Market is further estimated to grow at a CAGR of 11.16% from 2018 to reach USD 33.4 Billion by the year 2023. North America region holds the highest market share in 2017 and Europe market is considered as the fastest growing market in the forecasted period. At a country level China, Japan and
03-10-2017 | Leisure, Entertainment, Miscel …
Miles High Productions
Roadcase Royale Featuring Nancy Wilson, Liv Warfield to Release Debut Single “ …
Roadcase Royale to Play Live Debut Performance at Rock Against MS Event in Los Angeles on March 25 Los Angeles, CA, March 09, 2017 – Roadcase Royale, the new band featuring Nancy Wilson of Heart and Liv Warfield formerly of Prince’s New Power Generation, premieres the live performance video of their debut single “Get Loud” exclusively with RollingStone.com beginning March 8. This video premieres along with an exclusive interview with Rolling
10-26-2016 | IT, New Media & Software
TMR-Reseach
Nanosensors Market helping Defence Sector in the development of advanced warfiel …
Extensive Application of Nanosensors in Robotics Opens New Growth Avenues The changing dynamics of warfare will create an opportunity worth US$1,500.9 mn in the global nanosensors market by the end of 2021. The phenomenal uptake of nanosensors will be attributable to their burgeoning demand in the military and home security sectors, observes Transparency Market Research. The cost-effectiveness of manufacturing nanosensors and their compactness make them the preferred choice of sensors amongst
06-03-2016 | Business, Economy, Finances, B …
sabahsystems
Sahab Systems Brings Nail Salon Air Purifier to Remove the Harmful Chemicals and …
Sabah Systems is a leading company, produce chemical and fume extractor for salons. Generally, salon is working on various devices and most of them emit the harmful chemicals and odor which are not so good for our health, it can make cause of some dangerous diseases. Hence, many salon organizers are using Nail Salon Air Purifier which filter the harmful air and helpful to clean the environment also. We provide top
12-14-2010 | Arts & Culture
Coming to Understanding
Release of Coming to Understanding 2010
The Ammonius Foundation Press has announced the release of Coming to Understanding 2010. The book is the result of a half-century quest by its author to discover the truth about reality. Coming to Understanding is one of the most thoroughly reviewed works of the last decade. The first version to appear in print, Coming to Understanding 2000, included critical reviews and comments by the following eminent scholars: Ermanno Bencivenga Eugene
12-13-2010 | Business, Economy, Finances, B …
River City Exteriors L.P.
Home Remodel San Antonio Firm Offers Energy Efficient Improvements
San Antonio, TX December 2010. We found a trusted member of the business community, and accredited member of the Better Business Bureau, home owners now have access to energy efficient improvements at prices they can afford. When looking for Home Remodel San Antonio "River City Exteriors" of San Antonio Texas assists homeowners in selecting the proper energy efficient products for their homes. With more than five thousand satisfied customers over
Comments about openPR
Your portal is fast, simple, and easy to use. Others may have more functions but they also demand more editing time, you have to preformat the text in order to achieve a good result etc. I think openPR is really fantastic!
Andreas Knepper, wallmedien AG