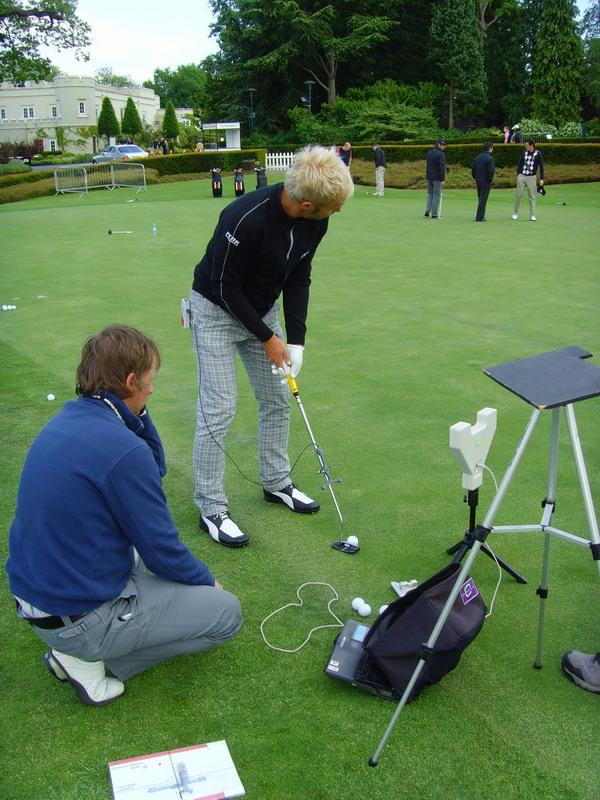 After a few weeks off due to the World Championship events and the USPGA (where Padraig Harrington won the second Mayor back to back) it was good to get back out to Arlandastaad near Stockholm for the Scandinavian Masters.The Tuesday was a pretty quite day however on Wednesday it was busy with once again lots of interest in the Donna Putter. Manual Quiros took one with a line on the top bent to 70 degree lie with a 2 thumb Feeltec grip. This is a prototype version of the 2 thumb grip, which is a lot lighter and softer.I also built up a Callie also with the new 2 thumb grip for Mark Foster and spent a little time working with Mark getting back to some basics after he has a few weeks off. Swedes Peter Gustaffson and did Henrik Norlander also picked up Donna putters while Joel Sjholm took an Abbie I built to 33.5 with a 60g counterweight.After lunching on volcanic dust Jesper Parnevik also tested the Donna and said he liked it. If we had one in a centre shaft he said he would have definitely used it.Ollie Fisher was also playing this week so we met up to do some work. Ollie had overdone a few little things in his set up so we got back on track and things were looking good.Next week it’s the Dutch Open in Holland. After a positive reaction to the work done at the British Open Henrik Stenson has requested Harold and I to be there to do some follow up work. Looking forward to that.Swash Putting Schools Asia/Pacific, Australia, South Africa, Middle East Oakrig House Canning Road Southport Merseyside England United Kingdom PR9 7SWContact: Michel Monnard, Apartado 44, 07580 Capdepera (Mallorca/Spain) Email: michel@swashputtingschools.com Phone: 0034 639635634About YES! Golf Yes! Golf, based in Denver, Col., is the proven leader in grooved putter technology. Harold Swash, known as the European putting doctor, introduced the innovative theory of concentric grooves in 1995. Today, C-Groove putters are taking the golf world by storm making Yes! Golf one of the fastest growing putters on the professional tours. For more information on Yes! Golf call 800.845.4327 or www.yesgolf.comAbout Harold Swash Putting School of Excellence Harold Swash is making his teaching philosophy available for all keen golf teaching professionals who want to learn how to teach Putting better. For more information about The Harold Swash Putting School of Excellence go to www.swashputtingschools.com