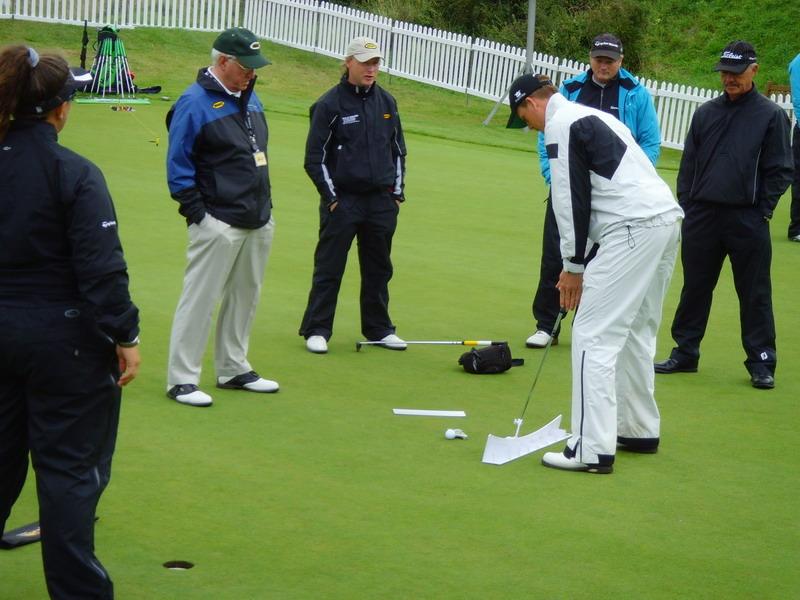 The venue was in Holland but the weather seemed very much British during the practice days for the Dutch Open at the Kennemer Golf Club in Zandvoort, near Amsterdam. Wind and showers hampered the players in the preparation and didn't make my job any easier either. However an enjoyable couple of days. On the Tuesday it was great to meet up with Henrik Stenson again, having not seen him since the Open. Since the work he did with Harold and I Henrik has had his 2 best finishes in the majors. This week it was an opportunity to progress a little with the things we worked on at Birkdale. Henrik was positive about the changes and keen to get to grips with things.Over the 2 days we also worked with Simon Dyson. Simon asked if we could help after struggling on the green recently. He seemed happy at the close of practice on Wednesday and looking forward to an event he won 2 years ago on the same course.This week Per Ulrik Johanson picked up a Carolyne Long Putter, which I have a feeling will be in play this week. He was really pleased with it and felt it rolled the ball a lot better than the previous long putter he was using. Per’s stroke using the long putter also looked a lot better than the data we took at Wentworth with the SAM Puttlab when he was using a short putter. He took a lot of confidence from that.Once again did some work with Peter Fowler using the SAM Puttlab. Based on the data from the Puttlab we tested if a face balanced putter, as Pete has been using a toe heavy putter, would suit him better. The face balanced putter came out with better stats.Also met and chatted with Alex Noren this week. I have noticed Alex before and how well he has done since coming out on tour last year, but we have never spoke. Alex wanted to get his stroke analysed on the SAM Puttlab, which we duly obliged, passing on a few insights at the same time.Next week its Gleneagles for the Johnny Walker Championship.Swash Putting Schools Asia/Pacific, Australia, South Africa, Middle East Oakrig House Canning Road Southport Merseyside England United Kingdom PR9 7SWContact: Michel Monnard, Apartado 44, 07580 Capdepera (Mallorca/Spain) Email: michel@swashputtingschools.com Phone: 0034 639635634About YES! Golf Yes! Golf, based in Denver, Col., is the proven leader in grooved putter technology. Harold Swash, known as the European putting doctor, introduced the innovative theory of concentric grooves in 1995. Today, C-Groove putters are taking the golf world by storm making Yes! Golf one of the fastest growing putters on the professional tours. For more information on Yes! Golf call 800.845.4327 or www.yesgolf.comAbout Harold Swash Putting School of Excellence Harold Swash is making his teaching philosophy available for all keen golf teaching professionals who want to learn how to teach Putting better. For more information about The Harold Swash Putting School of Excellence go to www.swashputtingschools.com