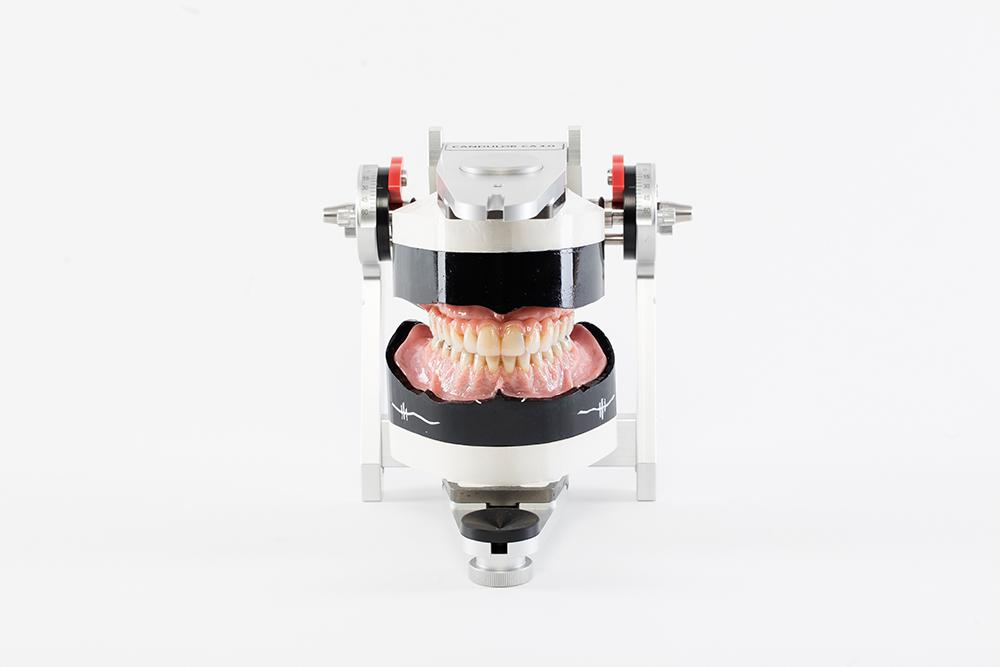 What a challenge and what a close decision! The coveted "CANDULOR Award" was presented for the 10th time at the 37th International Dental Show (IDS).The competition This year sees the 10th anniversary of CANDULOR's International KunstZahnWerk. The CANDULOR KZW Competition has been conducted with great success since 1999. Dental technicians from all over the world meet regularly at the International Dental Show (IDS) to face the challenge of removable prosthetics. This gives participants a platform to demonstrate their skills to a broader audience.For the 10th edition of the KZW Competition CANDULOR has again entered a cooperation with CAMLOG to provide an exciting competition at the IDS 2017 in Cologne. The challenge was to fabricate a combination consisting of a mucosa-supported full denture for the mandible and an implant-supported restoration for the maxilla. Plus an additional special feature: participants were able to decide themselves which set-up technique they want to use and display.Ms Claudia Schenkel-Thiel, Managing Director of CANDULOR AG, opened the award ceremony with a cordial welcome to all participants and praised the submitted pieces of art. Prior to the award ceremony she told the story about how the KunstZahnWerk originated in which the best of the best are promoted.The award winners 2017 First place went to Mr Christian Geretschläger from Breitenberg (Germany). The winner competed against 42 other excellent participants from across the world and received € 1,500 as well as the Golden CANDULOR Award.Second place went to Mr Roman Wolf from Munich (Germany), who was delighted with € 1,000 and the Silver CANDULOR Award.Third place went to Mr Henryk Jurzyca from Wuppertal (Germany). He too, was the proud winner of € 500 and the Bronze CANDULOR Award.Participants who made the top 15, received material prizes in the form of subscriptions or book prizes which were generously donated by the trade publishers Quintessenz, Verlag Neuer Merkur, Spitta, Oemus Media as well as teamwork media Germany and Italy.Mr Ioulianos Moustakis from Falkensee (Germany) took 1th place in the category "Best Documentation". He was delighted with the special prizes in form of a Victorinox Swiss Champ XLT pocket knife donated by the Oemus Media Verlag.Further prizes for 2nd and 3rd places went to Mr Christian Geretschläger from Breitenberg (Germany) as well as Ms Blandine Boutet from Mont de Marsan (France). Mr Geretschläger received a book from publisher Verlag Neuer Merkur and Ms Boutet a book from publisher teamwork media Germany.The jury To do justice to the task in hand, the international jury consisted of competent experts:- Prof. Dr. Martin Schimmel, MAS Oral Biol, University Bern - MDT Thomas Schibler, Instructor Education International at CAMLOG Biotechnologies AG - DT Meinrad Maier, Chief Expert CH Technical College - DT Helmut Kircheis, Course Manager CANDULORThis team of experts checked, discussed and finally assessed each individual piece of work. The function, esthetics, overall craftsmanship as well as the documentation of the entries were assessed using a complex process.Visitors to the IDS were able to view all the competition entries at the CANDULOR exhibition stand in person.CANDULOR AG Boulevard Lilienthal 8 CH-8152 Glattpark (Opfikon) Phone +41 (0)44 805 90 00 Fax +41 (0)44 805 90 90 www.candulor.com candulor@candulor.chAbout CANDULOR AG: CANDULOR AG is a worldwide exporting dental company with its headquarters in Switzerland. CANDULOR's customers benefit from a complete prosthetic system: a combination of esthetics, design and functionality. Together with the science-based positioning system according to Prof. Dr. A. Gerber (Condyloform®) the physiological positioning system (Bonartic®) forms the basis of this system. The portfolio also includes the highly esthetic NFC+ tooth lines, products for registration and articulation as well as for completion and characterization. Dental technicians and dentists have trusted the Swiss products for 80 years to meet the esthetic demands of their patients. For further information please visit candulor.com.

You can edit or delete your press release 10. CANDULOR KUNSTZAHNWERK COMPETITION here

01-21-2021 | Health & Medicine
Candulor AG
HEROES WANTED: PROBABLY THE TOUGHEST KUNSTZAHNWERK CASE WE HAVE EVER HAD.
Zurich, January 2021: the Swiss School of Prosthetics by CANDULOR presents the new KunstZahnWerk competition 2021. It is not about a classic high gloss polished case. It is not about the quick setup for in between. It is not about the KunstZahnWerk as you know it. Become the hero of your vocation, of your own work. As a dental technician you are well aware: all that glitters is not gold. You
02-27-2019 | Health & Medicine
Candulor AG
NEW. ENJOY THE IDS TO THE SOUND OF CANDULOR.
CANDULOR will let your ears ring. Discover new playlists via Spotify. Listening to music is a part of life. No matter which mood you happen to be in. We compile playlists for the day and the night, for leisure and for work - to feel good, to relax and to crank up the beat. The first two playlists are now available online. Follow CANDULOR on Spotify and enjoy music on the
02-20-2019 | Health & Medicine
Candulor AG
NEW. TOOTHSCOUT. FINDING THE RIGHT ONES.
CANDULOR AG relaunches the ToothScout with improved and new functions in the clear CANDULOR look. After nearly 10 years we have revised the ToothScout completely. The usability of apps has changed so much over the course of a decade that customers are now using mobile apps quite differently. Apps should be more intuitive, and of course with a clear benefit. What has changed? Working with a profile. You create your profile. Your data is
05-22-2018 | Health & Medicine
CANDULOR AG
The KMG Liquid is back - with a new improved formula
The «KMG Liquid» universal high-gloss polishing paste for denture acrylics and metals inspires old and new fans with its improved properties. The advantages: KMG Liquid enables achieving a fast high gloss result. The paste is easier to dose because it is not quite as liquid as its predecessor; and thus provides a considerably higher yield. KMG Liquid is a homogeneous liquid, therefore making it easier to use. In addition, it has