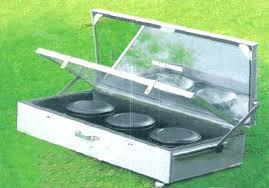 Zion Market Research, the market research group announced the analysis report titled "Solar Cooker Market - Global Industry Perspective, Comprehensive Analysis and Forecast 2015-2021"The energy obtained due to the nuclear fusion of hydrogen and helium in the inner core of the sun is called as solar energy. The solar energy is considered to be safe, green and renewable energy. Solar cookers are the application of solar energy used to cook, bake, and fry food. Solar Cookers can also be used for pasteurization. Solar cooker converts the radiant energy to the heat energy which is used for cooking food.Request Free Sample Report @ https://www.zionmarketresearch.com/sample/solar-cooker-marketGrowing awareness for the use of renewable energy along with escalating prices of non renewable energy drives the solar cooker market. Government support and funding for the use of solar energy also stimulates the growth of solar cooker market. Also, development of new technologies utilizing solar energy along with introduction of cost efficient technologies compared to conventional energy sources foster the demand for the solar cooker market. However, lack of awareness among the developing countries and maturation of the solar cooker market in the developed countries may inhibit the growth of solar cooker market. Nevertheless, untapped opportunities from the emerging economies are likely to open new avenue in the near future.The report provides a comprehensive view on the solar cooker market we have included a detailed value chain analysis. To understand the competitive landscape in the market, an analysis of Porter’s Five Forces model for the solar cooker market has also been included. The study encompasses a market attractiveness analysis, wherein type segments are benchmarked based on their market size, growth rate and general attractiveness. The report also analyzes several driving and restraining factors and their impact on the market during the forecast period.Various types of solar cooker are designed according to the intensity of exposure to the sun and according to the type of food to be cooked in. Solar panel cooker, solar parabolic cooker and solar box cooker are the types of solar cooker. Solar box cooker is the most widely known and used cooker due to easy and safe operating with no regulation required. The solar panel cooker consists of vessel kept in the center of the reflective panel to concentrate the radiations on the vessel. Request Report TOC (Table of Contents) @ https://www.zionmarketresearch.com/toc/solar-cooker-marketThe solar panel is highly efficient as compared to solar box cooker. For obtaining high temperatures for grilling and frying food solar parabolic cooker is utilized. The only drawback for using of parabolic cookers is, they need to be adjusted according to the sun rays frequently for achieving high temperature and efficiency.Asia Pacific and Latin America are the fastest growing market for the solar cooker market and is expected to accelerate the growth rate in the coming years. This is mainly attributed to the factors such as rising awareness along with accomplishment from the government for developing techniques for the use of solar energy. To meet the unmet demands for petroleum products such as use of LPG for cooking food from the escalating population, solar cooker are used on large scale. However, due to saturated market, North America and Europe are expected to exhibit steady growth during the forecast period. However, the U.S. is the largest producer for solar box cooker followed by China.Solar Cookers International, Sunrise Global Solar Energy, Sun Fire Rudra Solar Energy, and Sun Oven are some of the key participants for the solar cooker market.Browse detail report @ https://www.zionmarketresearch.com/report/solar-cooker-marketThe report segments of the solar cooker market into:Solar Cooker Market: Type Segment AnalysisSolar panel cooker Solar parabolic cooker Solar box cookerSolar Cooker Market: Regional Segment AnalysisNorth America U.S. Europe UK France Germany Asia Pacific China Japan India Latin America Brazil Middle East & AfricaAsk for a customized report @ https://www.zionmarketresearch.com/custom/82About Us: Zion Market Research is an obligated company. We create futuristic, cutting edge, informative reports ranging from industry reports, company reports to country reports. We provide our clients not only with market statistics unveiled by avowed private publishers and public organizations but also with vogue and newest industry reports along with pre-eminent and niche company profiles. Our database of market research reports comprises a wide variety of reports from cardinal industries. Our database is been updated constantly in order to fulfill our clients with prompt and direct online access to our database. Keeping in mind the client’s needs, we have included expert insights on global industries, products, and market trends in this database. Last but not the least, we make it our duty to ensure the success of clients connected to us—after all—if you do well, a little of the light shines on us.Contact Us: Zion Market Research 4283, Express Lane, Suite 634-143, Sarasota, Florida 34249, United States Tel: +49-322 210 92714 USA/Canada Toll-Free No.1-855-465-4651 Email: sales@zionmarketresearch.com Website: http://www.zionmarketresearch.com

You can edit or delete your press release Global Solar Cooker Market Growth, Size or Share Estimated to increase by 2016 – 2024 here