Speed up for Speed Shuffleboard 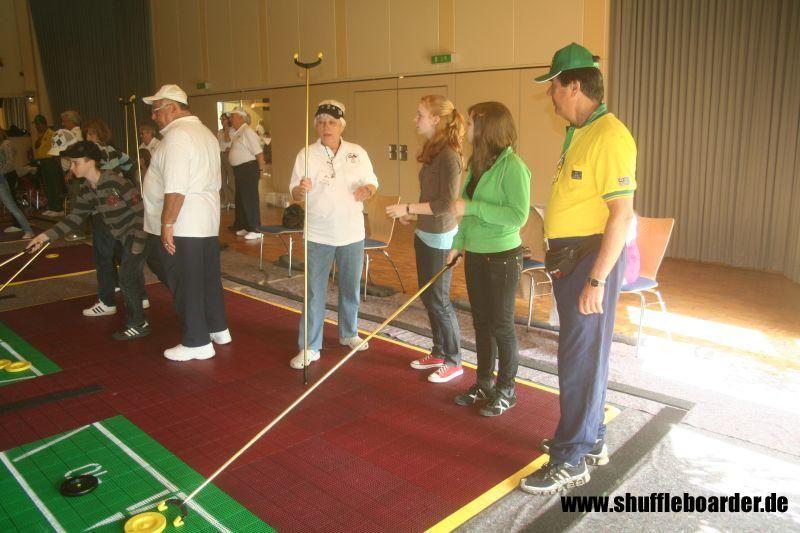 SpeedShuffleboard at the Inaugural in Germany

Only a few days left until the start of SpeedShuffleboard League2. The hugh success of League1 made it necessary for the German Shuffleboard Association to set up another league. During the Inaugural in Germany, ISA President Gus Bondi as well as players from Brazil, Canada and Germany proved SpeedShuffleboard, a form of Turkey Shoot, to be a competitive, skill necessitating, but also fun game (see pic). Meanwhile there are not only German Teams playing as 3 Canadian Teams joined the league and there is now interest from the United States as well. It looks like this test league develops to an international league system. So if you would like to compete with international opponents around the world, grab yourself a partner to form a team, give yourself a team name and send a short email to dieter(at)shuffleboarder.de . stating your interest. You will be provided with more and detailed information. And of course, as you know, the best things in life are for free... Heinz-Dieter Hußmann German Shuffleboard Association e.V. Erlenweg 1 63505 Langenselbold Tel. +49 6184 937677 email: hdhu@gmx.de hp: www.shuffleboarder.de Press Contact: Heinz-Dieter Hußmann President Erlenweg 1 63505 Langenselbold Tel. +49 6184 937677 email: hdhu@gmx.de The German Shuffleboard Association e.V. (GSA) with its headquarters in Langenselbold, Hesse, Germany was founded in December 2005 in Meerbusch, NRW, Germany. The GSA is the official German representative for Shuffleboard in Germany and member of the International Shuffleboard Association (ISA). Objectives of the GSA are promoting the sport of Shuffleboard and foster national and international contacts. The GSA is registered under German law in the Register of Associations at the County Court Hanau under: VR 31531

07-13-2017 | Advertising, Media Consulting, …
ReportsWeb
Luxury Goods in Germany
Luxury goods enjoyed further positive growth in Germany in 2016, with volume and value sales increases seen in all nine categories covered by Publisher. The highest overall growth was seen in the rather young category of luxury portable consumer electronics, while the slowest growth was reported in the rather old-fashioned category of luxury writing instruments and stationery. Ultimately, the current value growth rate registered across luxury goods in 2016 was
06-08-2017 | Business, Economy, Finances, B …
ReportsWorldwide
Agrochemicals Market in Germany
ReportsWorldwide has announced the addition of a new report title Germany: Agrochemicals: Market Intelligence (2016-2021) to its growing collection of premium market research reports. The report “Germany: Agrochemicals: Market Intelligence (2016-2021)” provides market intelligence on the different market segments, based on type, active ingredient, formulation, crop, and pest. Market size and forecast (2016-2021) has been provided in terms of both, value (000 USD) and volume (000 KG) in the report. A
12-07-2016 | Business, Economy, Finances, B …
ReportBazzar
Packaged Food in Germany
Summary Retail value sales of packaged food continued to grow in Germany in 2016, as was the case in all years of the review period from 2011 to 2016. The last time a decline took place was in the context of the global economic and financial crisis and the following recession in 2010. In the context of the review period as a whole, the 2016 development was slightly below average, although
11-10-2016 | Health & Medicine
Industry Research
Laparoscopes Market 2016 - Stryker (USA), Henke-Sass Wolf (Germany ), Aesculap ( …
Laparoscopic surgery uses a special instrument called the laparoscope. The laparoscope is a long, slender device that is inserted into the abdomen through a small incision. It has a camera attached to it that allows the obstetrician–gynecologist (ob-gyn) to view the abdominal and pelvic organs on an electronic screen. If a problem needs to be fixed, other instruments can be used. These instruments usually are inserted through additional small incisions
11-05-2008 | Science & Education
educationconsult
MBA - Market Germany
The MBA degree is becoming increasingly more important for career opportunities of young professionals and managers in German- speaking countries. Simultaneously, there is a wide variety of MBA programs and it is strenuous to find the exact program desired. Educationconsult is glad to give you a short overview regarding the German MBA-market. Fact sheet 2009: • 72 University and 130 Universities of Applied Sciences (Fachhochschule) in Germany offer traditional Business Degrees (Diplom,
10-25-2007 | Science & Education
Sprachinstitut TREFFPUNKT
How safe is Germany?
A few weeks ago, alarmist coverage of a fight which took place during a festival in the small town of Mügeln (Saxony) was featured in newspapers throughout Germany. The incident consisted of a violent confrontation between Indians and Germans, resulting in speculation that the fight was racially motivated. Since then the question of whether Germans are racist or xenophobic has once more been the subject of vigorous discussion. However, Germany is
Comments about openPR
I can't but agree to the positive statements about your portal: easy to use, clear layout, very good search function, and quick editing!
Jens O'Brien, Borgmeier Media Communication