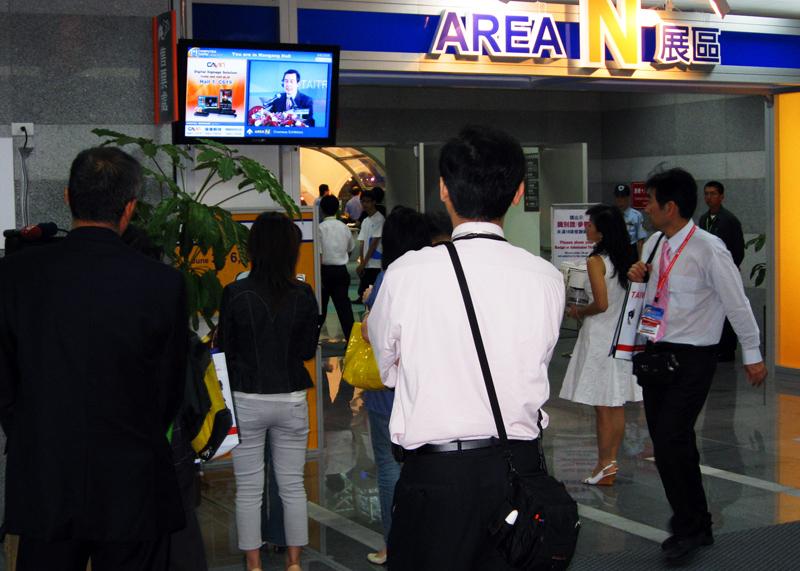 Visitors and journalists were watching the live opening ceremony of COMPUTEX TAIPEI 2008 from the screen, powered by CAYIN's digital signage system

CAYIN Technology, the professional supplier of digital signage solutions, sponsored Taiwan External Trade Development Council (TAITRA), the organizer of COMPUTEX TAIPEI 20008, which was held from June 3 to June 7 in Taiwan, in presenting a full-scale digital signage system to convey exhibition information between three major exhibition sites. COMPUTEX TAIPEI is the second largest information technology (IT) exhibition worldwide, following CeBIT in Germany. In addition to the original exhibition halls, COMPUTEX TAIPEI 2008 expanded its scale to the brand-new TWTC Nangang Exhibition Hall, one of the largest exhibition venues in Asia. These exhibition halls are located in two different areas, which are separated from each other by a twenty-minute journey. Therefore, it is a crucial issue for the exhibition organizer to broadcast information instantly to all visitors and exhibitors in different halls.In this year, TAITRA especially offered the digital signage sponsorship to CAYIN Technology and deployed a system of 15 digital signage at the main entrances and selected areas, including press centers and VVIP lounges, in the main exhibition halls of Taipei World Trade Center (TWTC) and the new Nangang Exhibition Hall. This project marks the milestone for a complete display of networked digital signage to broadcast featured exhibition activities simultaneously at three exhibition sites in Taiwan for the first time.The opening ceremony, one of the important activities of COMPUTEX TAIPEI 2008, was held in the new Nangang Exhibition Hall and the organizer especially invited President Ma to address in the opening ceremony. The whole ceremony was witnessed not only by the press and visitors in the Nangang Exhibition Hall, but also live broadcasted to screens powered by CAYIN’s digital signage system in TWTC Hall 1, so that everyone could get involved in the exhibition. In addition to the live broadcast of the opening ceremony, digital signage screens also reminded visitors of official announcements and useful services, such as free shuttle buses at COMPUTEX. Furthermore, the signage located at different spots also served as an efficient promotional platform, informing and guiding visitors to featured activities and meetings faster and more easily. Under CAYIN’s integral plan, each of the digital signage displays deployed was equipped with an SMP player, and all of the players were linked through the Internet and centrally managed by a CMS server. The CMS server controlled the content of each player and assigned the right messages to the right player at the right time. As the developer of the system, CAYIN was able to monitor the status of each player instantaneously by its Super Monitor to ensure the successful operation of this project. In addition to CAYIN’s digital signage system, co-sponsors of this project included Chi Lin and Modernsolid, which respectively provided LCD screens and mounting solutions to complete the full-scale digital signage system. This joint effort boosted the presence of the three companies in the digital signage industry, both locally and globally.Cayin Technology Co., Ltd. 8F-2, No.577, Linsen N. Road, Taipei 104, Taiwan, R.O.C. TEL: +886-2-2595 1005 FAX: +886-2-2595 1050 Contact: Cindy Lai E-Mail: press@cayintech.comCAYIN Technology offers a complete portfolio of appliance-based digital signage solutions, including media players, servers, and software, for various commercial applications, such as education, transportation, retail, hospitality, corporate use, and financial and public institutions. CAYIN is dedicated to being a reliable partner to its clients worldwide, and has successfully set up various application references globally. In order to best facilitate the deployment of CAYIN products, the Company also provides tailored services to satisfy the ascending market demand for almost limitless applications.

12-05-2014 | IT, New Media & Software
Cayin Technology Co., Ltd.
New Concept for School of Medicine in a Digital Age
Mahidol University is a top-ranked university in Bangkok, Thailand. In order to enable efficient two-way communication with the campus, Mahidol adopted CAYIN digital signage solutions and built a digital information network in its medical center. With the use of digital technology, the limits of traditional learning can easily be transcended. Instant and Dynamic Messages In today's rapidly changing environment, digital signage has become an indispensable platform for education. Digital bulletin boards can
10-07-2014 | IT, New Media & Software
Cayin Technology Co., Ltd.
CAYIN Powers Omnichannel Strategies via Digital Signage at ISR
From October 29 to 31, CAYIN will take part in Integrated Systems Russia. CAYIN will take this opportunity to debut SMP-NEO series digital signage players and to showcase how digital signage plays a powerful touchpoint across different applications in the new omnichannel world. SMP-NEO has a whole new user interface. Integrating the cloud service, web-based skin editor, intelligent scheduling, and a variety of multimedia formats, SMP-NEO allows users to
09-05-2014 | IT, New Media & Software
Cayin Technology Co., Ltd.
CAYIN Debuts Next-Generation Digital Signage
With the availability of innovative and dynamic communications, digital signage becomes an indispensable new media in the digital era. Integrating the latest digital trends, CAYIN launches the next-generation digital signage players, embedded with the completely renewed and upgraded SMP-NEO system software. Users can have a chance to experience the state-of-the-art multimedia integration solutions and lead the next wave of media opportunities. The CAYIN SMP-NEO series digital signage player features a
07-07-2014 | IT, New Media & Software
Cayin Technology Co., Ltd.
Celebrate the 2014 FIFA World Cup with Digital Signage
To give fans an excellent view of the month-long football festival, the host country of the 2014 FIFA World Cup, Brazil, is making untiring efforts and arrangements by launching large-scale digital technology in the Arena Pantanal Stadium in Cuiabá. As part of the installation, CAYIN supplied a complete digital signage solution, including 122 digital signage players and 2 content management servers. Connecting more than 200 LED and LCD screens, CAYIN