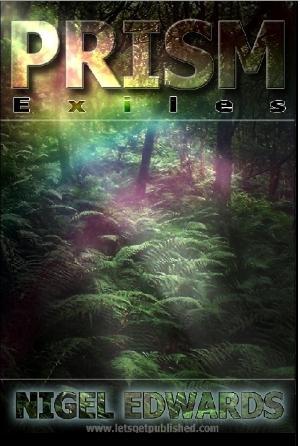 PRISM – Exiles is the latest novel from the pen of Nigel Edwards, author of The Cookie Tin. Exiles is the story of Luke Adams, a weak individual employed as an English teacher. In the middle of his humdrum life, Luke is transported to a different world. A few hundred other souls are transported with him, pulled into adventure by the simple virtue of their proximity. The catalyst for the transportation is a plate in his skull Luke received following a traffic accident. This plate was manufactured from a metal that contained the most minute of fragments from a machine that was destroyed in a war, a war that took place on a planet an immeasurable distance from Earth. Particles from the machine – which should not be considered as a mere mechanical device – were hurled across the space-time divide, to mingle with the broiling firmament of our nascent planet, later to be mined and incorporated into the medical plate Luke received. However, while the motes were the catalyst, they were not the engineers of the transportation – that was the product of deliberate action – but who those engineers were, what their purpose might be, and what Luke’s involvement might be, is the subject of the tale …The opening paragraph from the PRISM - Exiles begins:“Consider this. You are just an ordinary person, with nothing special to set you apart from the crowd. You have no unique skills or talents. You live a mundane life in an ordinary house in the suburbs of a run-of-the-mill town. You may be eighteen or eighty, and immersed in no-ones problems but your own. Then one day your world is turned upside down. You find yourself suddenly thrown together with five hundred other souls, severed from the life you once knew. Gone are the securities of technology, resource, and amenity that you once took for granted. In their place are hardship, uncertainty and fear. Now you must fend for yourself. So ask yourself this – how would you fare?”Bio. Nigel Edwards is the wrong side of 50, and a newcomer to the world of writing. He lives in Milton Keynes in the UK with his wife, Loraine, two dogs, a cat, two snakes, and a handful of tropical marine fish. Nigel has worked in the IT sector for many years, mainly in the field of software QA, but has long wanted to enter the literary world. Not a great academic while at school, Nigel left education at age eighteen to server in the Royal Air Force. He toured the Middle East while in service, and has visited the United States for work and pleasure, and vacationed in Europe. Born to Welsh parents in West Africa, Nigel came to the UK as a toddler in 1956 when his fathers’ work brought the family back to Wales. He is a qualified instructor in Shotokan Karate, and enjoys occasional trips out on his Moto Guzzi California. His favourite part of the world is Cornwall, where he holidays with Loraine whenever time allows.PRISM – Exiles is published by Let’s Get Published, ISBN #978-0-9558504-0-0, and is available in paperback and as an eBook download from http://www.lulu.com/nigeledwards. Nigel’s website (http://www.angrywildlegends.com) is well worth a visit. Readers will find more background information on both Nigel, and the PRISM series of books, as well as free eBook downloads of his work.Contact: Nigel Edwards Address: 30 Burghley Court, Great Holm, Milton Keynes, MK8 9EL, UK. eMail: legend@angrywildlegends.com Fone: 07799623736Nigel Edwards is a self-publishing author.