Antidepressant digital therapy (deprexis®) effective in the US 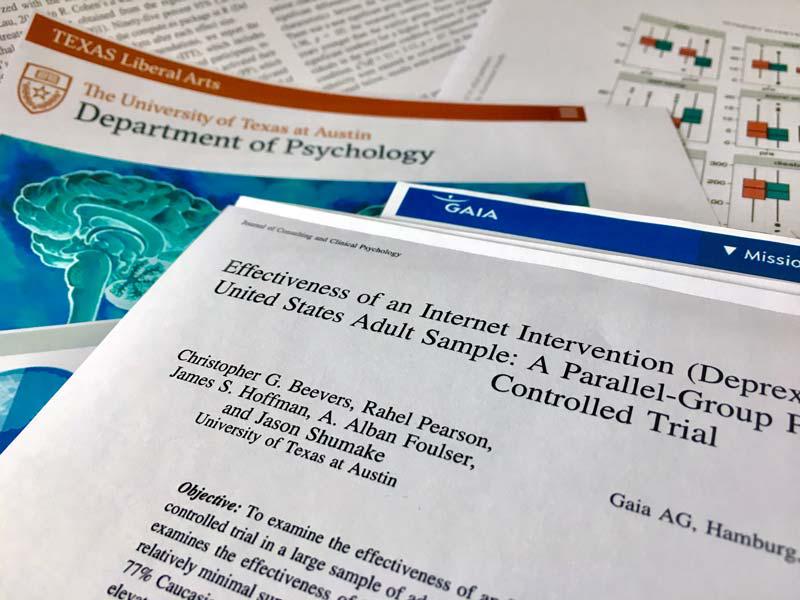 Deprexis effective in the U.S.

New trial confirms effectiveness of Gaia AG’s computer-based therapy deprexis with impressive effect size. Hamburg, Germany: GAIA AG, a global pioneer in digital therapy, announced today that deprexis®, a software developed by Gaia, has been demonstrated to be effective in a scientific study in the US. A randomized controlled trial (RCT) with N = 376 depressed adults, published in the latest issue of the Journal of Consulting and Clinical Psychology, has confirmed that deprexis is effective in the United States. The trial was led by Professor Christopher Beevers, Director of the Institute of Mental Health Research at the University of Texas, Austin. With an impressive effect size of d=0.80 (large effect), the study provides evidence that deprexis is at least as effective in the United States as in seven previous Europe-based trials. The researchers concluded that participants who received deprexis had a “12 times greater likelihood of experiencing at least 50% symptom improvement compared with waitlist control”. The deprexis effect was also replicated in the control group: After they received access to deprexis, similar depression reductions as those in the immediate treatment group were observed, confirming the robustness of the deprexis effect.“The results of this trial provide even more scientific evidence for the effectiveness of our digital therapeutics, now specifically in the US”, said Mario Weiss, CEO and founder of GAIA. “Several thousand patients have now taken part in deprexis studies around the world. We believe it is necessary to go to such lengths so that physicians, psychotherapists and patients can be confident they are using an effective tool.” Deprexis is globally licensed to Servier, except in the USA and Japan.GAIA is a global leader in digital therapeutics with a broad pipeline of products at different development stages. With its declared focus on research and development of evidence-based online interventions, the company continuously shifts benchmarks when it comes to efficacy and safety profiles for digital therapeutics in neuroscience. With more than 100 experts in the fields of medicine, psychology, behavioral medicine, software engineering, as well as regulatory and market access, GAIA is a key partner in the development of next-generation digital solutions to support and treat patients with a broad variety of medical conditions. More information: http://gaia-group.com/en ###GAIA AG Gertigstrasse 12-14 22303 Hamburg Germany+49 40 3510520 info@gaia-group.com

02-27-2017 | Health & Medicine
GAIA AG
JAMA Psychiatry meta-analysis confirms deprexis efficacy
* Gaia AG’s self-guided internet-based cognitive behavioral therapy effective in treating depressive symptoms * Hamburg, Germany: GAIA AG, a global pioneer in digital therapy, announced today that deprexis®, a web-based EC- and FDA-cleared medical device developed by GAIA, has once again been proven to be effective in a global scientific study. A new meta-analysis of individual patient data, published in the latest issue of JAMA Psychiatry, confirmed the efficacy of
07-30-2010 | Health & Medicine
GAIA AG
Individual Online Help for Depression
Depression is a common and growing disease. People who suffer from such a mental disease are often confronted with additional problems, both in their private and professional lives, as well as in their finances. Losing one’s job, friends and spending a lot of money for high-cost treatment like psychotherapy and medication at the same time add even more pressure to one’s already unhappy circumstances. And this is only the tip of
Comments about openPR
OpenPR ist the nicest and most clearly laid out PR platform I have seen to this day. The press releases are displayed very nicely and clearly and without any unnecessary frills. The updates are fast and the finished release looks appealing and is clearly legible. Even with 16 years of experience one discovers new things from time to time. Congratulations!
Gabriele Ketterl, Director Marketing & PR, Menads