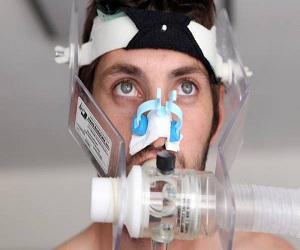 Apex Research announces that it has published a new study Exercise Oxygen Equipment: Market Shares, Strategy, and Forecasts, Worldwide, 2016 to 2022. The 2016 study has 360 pages, 145 tables and figures. Worldwide Exercise Oxygen Equipment markets are poised to achieve significant growth as consumer oxygen markets emerge from the trial phase to be used in sports clubs, by athletic teams, and in corporate gyms to increase the value of exercise and offer people a way to be more comfortable while they exercise.Request For Report Sample @ https://goo.gl/EEaPtgCompanies ProfiledBoost Oxygen Oxygen Plus Chart / Caire / SeQual Philips Respironics AirSep InvacareMarket Participants2nd Wind Distributors AirSep Boost Oxygen Chart Caire / AirSep / Sequal Chart Industries DeVilbiss DHGate Drive MedicalThe study looks at the excess of carbon dioxide found in tissue of many people before, during, and after exercise, and asks the question whether there is not enough oxygen in the lungs and blood hemoglobin to eliminate excess carbon dioxide. The use of supplemental oxygen appears to be indicated even when the pulse oximeter gives an entirely normal reading.Enquiry Before Buying @ https://goo.gl/aWMjw7Consumer oxygen works to release excess carbon dioxide trapped in tissue because the blood oxygen is not sufficient to do the cleaning function one wished it would do. With the aging of the population, many people do not exercise enough to gather the waste carbon dioxide generated by muscles and tissue. With the dramatic increase in people who are overweight and even obese, there is increased need for supplemental oxygen availability at the sites where people exercise. Only modest amounts of supplemental oxygen are needed to have an effect.Recreational oxygen has been available for a while, but only recently has there been a basic understanding of the value: eliminating excess carbon dioxide in the body. Build- ups of carbon dioxide come from the muscles. Recognition of the ability of to get rid of this excess has been enough to validate the value of supplemental oxygen. Excess carbon dioxide is not good for people. It would not be excess if normal breathing or even heavy breathing was able to rid the body of the build-up of carbon dioxide, but any extra weight is enough to create excess in the tissues. The muscles and cells work all the time, giving off carbon dioxide, and most people have an excess.About UsWe provide global enterprises and businesses across different industry verticals comprehensive market research services from off-the-shelf research reports to customized research conducted by our highly experienced industry analysts.Contact UsFrank Valadez Business Development Head Email id - sales@apexresearch.biz Website - http://www.apexresearch.biz/

08-27-2018 | Health & Medicine
Coherent Market Insights
Oxygen Conservation Devices Market, By Product Type (Pneumatic Oxygen Conserver …
Oxygen conservation devices are mainly of two types – pneumatic oxygen conservation devices and electronic oxygen conservation devices. Pneumatic oxygen conservation devices use high pressure of oxygen gas and do not require any external power source such as battery, whereas electronic oxygen conservation devices are battery supported. For instance, Invacare’s Invacare Pneumatic Oxygen Conserver is a pneumatic oxygen conservation device, which has an on and off selector knob coupled with
01-11-2018 | Health & Medicine
ReportsWeb
Supplemental Oxygen White Paper
Publisher Research announces that it has published a new study Supplemental Oxygen Can Remedy both Low and High Carbon Dioxide Blood Levels to Improve Endurance: White Paper. The 2017 White Paper has 14 pages. Supplemental oxygen used before and after exercise provides a key benefit of increasing endurance. Request Sample Copy at http://www.reportsweb.com/inquiry&RW00011308039/sample The conventional wisdom that we have all heard “exercise more and lose weight” is quite well established in
09-26-2017 | Advertising, Media Consulting, …
Spire Market Research
Global Consumer Oxygen Equipment Market Outlook 2017 Boost Oxygen, Oxygen Plus, …
Consumer Oxygen Equipment Industry Research Report 2017 A market study ” Consumer Oxygen Equipment Market ” will help you understand, formulate and implement strategic decisions by offering critical data, insights and analysis from technology as well as commercial perspective on the Consumer Oxygen Equipment market. It encloses an in-depth Research of the Consumer Oxygen Equipment market state and the competitive landscape globally. This report consist of comprehensive market data, on a
01-18-2017 | Fashion, Lifestyle, Trends
Urbane Living
Urbane Living: Oxygen Printed Wallcoverings
London – January 18 2017. Relax in a tropical paradise from the comfort of your own home with Urbane Living’s stunning Oxygen wallcovering collection. With a wide range of different designs taking inspiration from stylish botanical prints, the Oxygen collection provides a plethora of options for trying out the trend, whether you prefer a bold design or something more subtle. Palm fronds and tropical foliage have been popular design motifs in recent
01-13-2012 | IT, New Media & Software
Syncro Soft SRL
New Release of Oxygen XML Editor, Oxygen XML Author and Oxygen XML Developer, ve …
Syncro Soft SRL, the producer of Oxygen XML Editor, has announced the immediate availability of version 13.2 of its XML Editor containing a comprehensive set of tools supporting all the XML related technologies. Oxygen combines content author features like the CSS driven Visual XML editor with a fully featured XML development environment. It has ready-to-use support for the main document frameworks DITA, DocBook, TEI and XHTML and also includes support
04-23-2008 | Industry, Real Estate & Constr …
Messer Group GmbH
More oxygen, more steel
Consuming vast quantities of the atmospheric gases nitrogen, oxygen and argon, the blast furnaces in the Chinese Xiangtan steel works in the province of Hunan are now to be served by a fifth air-separation unit. This latest addition will ensure sufficiently high availability of industrial gases to enable Xiangtan to boost its annual steel production from its current 6.5 million tonnes. Oxygen promotes combustion and is blasted into the furnaces
Comments about openPR
We publish our press releases on openPR.de because we like people who are "open" - just like us.
Frank Obels, CEO, INCONET - Informationssysteme, Communication und Netzwerkberatung GmbH