Playwright Michael Reyes Interviewed Prior to West Coast Premiere of His Play in San Pedro, California 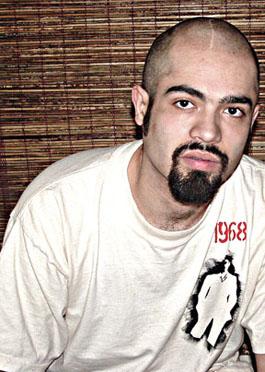 Michael Reyes is a writer residing in New York City. His play, Over There Over Here will have it West Coast Premiere on May 29th at San Pedro's Warner Grand Theatre which is a facility of the City of Los Angeles Department of Cultural Affairs.

An Interview with Michael Reyes

A candid conversation between the playwright of Over There/Over Here opening May 29th at Warner Grand Theatre in San Pedro for its West Coast Premiere, and the Artistic Director of The Relevant Stage Theatre Company, Ray Buffer. Michael Reyes, Playwight

RB: Tell us a little about yourself. What was it like for you growing up?
MR: I was born and raised on welfare to a single mother in Park Slope Brooklyn. My father was in and out of jail for most of my youth. I wanted to become a writer since about the age of ten, but as I grew older I moved away from it and stopped going to school at fifteen. I became Crip and started selling drugs. Things became really bad and I had to leave my mom's house because things got really hot. At the age of eighteen I got my GED and joined the military so I could make my parents proud and start a new life for myself.

RB: When did you decide to become a playwright?
MR: I decided to write plays my first year back from Iraq, 2004. I had decided to take writing seriously after I had completed boot camp and deployed to Germany, but I mainly wrote short fiction and poetry. However, during my first year back I had developed an idea for a project which I felt was right for the stage. It was a short one act named Tower Five, which I've since developed into a two act play. Castillo Theatre gave the play a staged reading in 2005.

RB: What led you to write Over There/Over Here?
MR: After a staged reading of some of my short sketches in the summer of 2006, Dan Friedman and Brian Mullin of Youth Onstage approached me about the possibility of creating a play for the new season. The play was to be about Iraq and I was to develop it through workshops and classes with actors and actresses from the program. I wanted the project to be about some of my experiences in Iraq, but I didn't want the play to be about me. I also wanted to depict many different opinions about the war, not just my own. I felt the work would need some degree of objectivity. We developed it in workshop and created Over There/Over Here in early fall 2006.

RB: What other pieces have you written - or are currently writing and what are they about?
MR: I've written a two act play named K-toned, it's about drug dealers, left wing politics, gentrification and Brooklyn. Another two-act play about Iraq titled Tower Five - much darker and more personal than Over There/Over Here; a short one act satire named Restless Leg Syndrome, it's about the greed and corruption of the psychiatric and pharmaceutical industries. The Stare, an absurdist one act about staring and hyper accelerated consumer capitalism and a book sized collection of short sketches called The Great Sleep and It's Clients. I've just begun working on a musical about former F.B.I. director J. Edgar Hoover.

RB: Is writing your main interest, or are you involved in other parts of theatre?
MR: I directed my last show at the Bowery Poetry Club. I didn't like it. I don't have the patience to work with most actors and actresses.

RB:Have you written in other formats?
MR:I've been writing short fiction and poetry but I don't feel comfortable in either format, to be honest.

RB: What do you hope to be doing 5 years from today?
MR: Five years from now? I want to start up an International Non Governmental Organization providing humanitarian aid to inhabitants of slum cities, in that time.

RB: What inspires you?
MR: People who have lived and died for a worthy cause inspire me. Che, Malcolm, Martin. I got no love for people who just live to eat, shit and fuck.

RB: Any favorite plays that have influenced you?
MR: Faust, Short Eyes, Rhinoceros, Zoo Story, The Homecoming, and Hamlet.

RB: What is your personal, next project?
MR: A collection of sketches at the Bower Poetry Club early summer.

RB: I wish you much success with your future plans and thank you Michael for sharing your story with us. It's clearly been a remarkable journey so far.

The Relevant Stage is a new, non-profit theatre company performing in residence at The Warner Grand Theatre in San Pedro, CA. The Warner Grand Theatre is a facility of the City of Los Angeles Department of Cultural Affairs. TRS' mission is to produce plays, musicals, operas, and mixed media productions that challenge hearts, engage minds and expose truths. TRS tells relevant stories about the contemporary world we share.

You can edit or delete your press release Playwright Michael Reyes Interviewed Prior to West Coast Premiere of His Play in San Pedro, California here

07-13-2009 | Arts & Culture
The Relevant Stage Theatre Company
San Pedro Awaits THE LAST FIVE YEARS
THE LAST FIVE YEARS COMES TO SAN PEDRO The Relevant Stage presents Marla McClure and Ray Buffer in Jason Robert Brown’s, THE LAST FIVE YEARS. Performances are August 7, 8, 14, 15, 21, 22 at 8PM, and August 9, 16, and 23 at 2:30PM at Warner Grand Theatre – 478 West 6th Street, San Pedro, CA 90731. Tickets are only $20 for adults, $15 for students and seniors,
06-04-2009 | Arts & Culture
The Relevant Stage Theatre Company
San Pedro Gets Down With $3 Movies - Produced in part by Central San Pedro Neigh …
San Pedro’s 78-year-old movie palace and arts venue, Warner Grand Theatre will present a series of Summer Films on most Wednesday evenings, beginning June 17. The series will be called Warner On Wednesdays (W.O.W.) and will feature new and classic films shown at 6PM and 9PM for only $3 admission per person. W.O.W. is being produced through a community partnership between Central San Pedro Neighborhood Council, Sacred Grounds Coffee House,
05-06-2009 | Arts & Culture
The Relevant Stage Theatre Company
Orange County Artist Premieres New Musical Theatre Work in Los Angeles
On May 22, Upton Sinclair’s Singing Jailbirds: The Musical will makes its world premiere. Ray Buffer of Huntington Beach is the artistic producing director of San Pedro’s The Relevant Stage, and “Jailbirds” is his full-fledged musical adaptation of a lost work written by Upton Sinclair in 1924. “Singing Jailbirds” was originally written by Sinclair after his experiences witnessing the strikes in San Pedro in 1923, and his own
05-06-2009 | Health & Medicine
The Relevant Stage Theatre Company
Beacon House Performs in Singing Jailbirds: The Musical at Warner Grand Theatre …
The world premiere of Upton Sincair's Singing Jailbirds: The Musical features 16 talented residents of the Beacon House Association of San Pedro. "Jailbirds" tells the story of the stuggles in the early 1900's of the worker's movement and the efforts to create One Big Union by the Industrial Worker's of the World who believed in "Solidarity Forever". The Beacon House Association of San Pedro was founded in 1974 as a